There’s a good chance that the next five years will be far more challenging for investors than the past five. It’s rare that a market delivers returns (12% annual returns) greater than its volatility (11% standard deviation). We’ve had five years of extraordinary monetary policy; if the next five years look more ordinary (say, 10 year rates back to their normal 3-4% range), there’s likely to be a “repricing” of assets, possibly dramatic, surely erratic. GMO’s asset class projections, which simply assume a return to normal levels of profits and earnings, say that almost all asset classes are set for negative real returns.

For folks looking for managers well-equipped to handle hostile markets, we used the fund screener at MFO Premium to identify the 25 domestic stock funds that posted the strongest risk-adjusted returns during the global market crisis of 2007-09 (the screener identifies that as Down Market Cycle 5).

Why the focus on risk-adjusted returns? Isn’t it all about beating the market? Well, no. The price of some returns is simply too high to bear. You might earn an 8% return over four years by gaining 2% annually or you might earn 10% by losing 30% in Year One, making 50% in Year Two, losing 30% again, then making 50% again. No rational person would choose Option 2 and if you’d inadvertently stumbled into it, you’d be unlikely to remain. That sort of performance is reflected in David Iben’s Kopernik Global All-Cap Fund (KGGAX ). Mr. Iben is a famously talented, aggressive investor who gained renown as manager of Nuveen Tradewinds Value Opportunities (NVOAX). He left Tradewinds to found Kopernik and his flagship fund has posted market beating returns since inception. Here’s a picture of what that looks like: 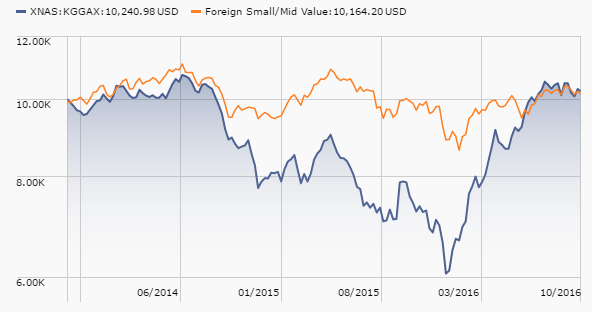 That trough in March 2016 represents a 40% loss for Mr. Iben’s investors, about four times what his peers suffered. His fund is up about 80% since then. That’s great. It’s also not worth it. You’d have been much better off with the mediocre little orange line funds that now trail Kopernik. By looking at risk-adjusted returns rather than raw market beating power, we’re trying to find funds you can actually live with.

Our next question was, how did they hold up during the subsequent bull market (called Up Market Cycle 5).

The results are laid out below. For the sake of simplicity, we consistently color-code “the best” results in blue. Those represent results in the top 20%. Green are still above average, yellow is average, orange and red are below. You’ll notice that “1” is sometimes blue and other times “5” is blue. Simple explanation: low risk (“1” on the risk scale) is good and high return (“5” on the return scale) is good.

I’ve simplified the screener’s output to look at just three variables: pure risk, which is measured by a fund’s downside deviation, pure return, measured by its annual percentage return, and then risk-adjusted returns measured by its Sharpe ratio. The premium screener adds a bunch of other risk and risk-return metrics, but these are a good start.

Ideally, you’d look for funds that were blue (best) and green (second best) across the board. Three qualify

Yacktman Focused (YAFFX), a freakishly excellent fund whose namesake manager, Donald Yacktman, retired on May 1, 2016. His son and long-time co-manager, Stephen, remains. Whether Stephen can match his father’s performance remains to be seen.

Why so few winners (three of 25?). Part of the answer is column 5, pure returns during the bull market. In seven cases, funds posted strong risk-adjusted returns while posting average to weak raw returns. That is, these funds went up a little less than the market but exposed you to a lot less risk. They are:

Champlain Small Company (CIPSX), which is closed to new investors.

Copley (COPLX), which has been run by Irving Levine since 1978. He came to investment management after a 20 year career that started, in 1946, in handbag manufacturing. Ed would really want to sit down as a quiet club with this guy.

Hancock Horizon Burkenroad Small Cap (HHBUX), a $700 million small-core fund that’s completely off my radar, in part because it’s larger than we normally target but also because the “Hancock” name threw me off. It looks like an interesting little fund complex headquartered in New Orleans.

Intrepid Disciplined Value (ICMCX), a sort of all-cap version of Intrepid Endurance which, like Endurance, is willing to hold cash when opportunities are scarce. It’s about 50% cash at the moment.

Intrepid Endurance (ICMAX), which we’ve profiled and in which I invest. Endurance tends to invest in small cap value stocks and is one of the few funds still willing to hold cash, 70% currently, when opportunities are scarce.

Symons Value (SAVIX), a nominally institutional LCV fund with the same manager since inception and a $5,000 investment minimum. (The guy earned a B.A. in three years from Williams College and started off as a financial software developer. Cool!) It has earned a Great Owl Fund designation for top-tier risk-adjusted returns in every trailing measurement period.

The handful of funds that have posted disappointing results in both absolute and risk adjusted returns seem to fall into three camps: funds whose lead managers left five or six years ago (Westwood’s founding managers, headlined by Susan Byrne, had all departed around 2011; likewise, the managers for Invesco Exchange and Needham Aggressive left in 2010), freaks (well, Nysa) and the Royce funds (the whole complex suffered for overexpansion in the 2000s and seem to be staggering about a bit as they contemplate life after its founding generation of managers).

Bottom line: approach Yacktman cautiously (they have a new fund, Yacktman Fully Invested, about to launch) and the other six open candidates with curiosity and interest. If you meet Mr. Levine, pass along our respects and admiration. If you like funds in the SoGen / First Eagle tradition, be sure to check out Centerstone Investors (CETAX), run by First Eagle’s former lead manager, Abhay Despande.