Last month we discussed  Nuance Concentrated Value Fund (NCVLX.) The fund had some big exposures to less liquid names and the strategy was nearing its capacity. At some point the advisor is likely to soft-close the concentrated fund but continue to grow the smaller and more diversified midcap fund.

It is not unusual that fund purveyors offer a version with a higher concentration of the manager’s high-conviction ideas. Sometimes you can spot these derivative funds based on names like Focused or Select Opportunities.

When the same advisor manages multiple funds in the same space, giving an extra dollop of the manager’s best ideas to one fund seems like a delicate balancing act. After all, the advisor owes an equal fiduciary duty to all funds. The manager can rely on differences in stated objectives, fund flows, and personnel as safe harbors.

Should you seek out amanager who runs a concentrated fund? You are attracted to the fund because you believe the active manager is worth his salt and can beat his benchmark. If you aren’t hampered by diversification requirements, shouldn’t you choose the fund that has more of the manager’s best ideas?

Just like with processed food, investment fillers are often there just to fill up the portfolio, but often provide little value and in some cases can be hazardous to your health!

Mr. Cinnamond was making the point that investors might be better off with a manager who just holds extra cash instead of diluting his portfolio with low conviction ideas or a closet-index sub-portfolio.

We tend to agree. Our FundAttribution.com evaluations do not punish managers whose returns are weighed down by large cash balances

Concentration makes good managers better and bad managers worse. But on average [it] hurts everyone

But for funds running concentrated portfolios the reality is more complicated. To test this, we studied funds in our database of actively managed equity funds with a concentrated fund overlapping a more diversified portfolio under common management. Excluding funds with insufficient history we identified 70 conjugate pairs; we compared manager skill the three years ending July 31, 2016

By way of explanation: The figures in the article are based on Trapezoid’s sS metric. Skill is the manager’s value added from security selection and other factors. Our methodology backs out the manager’s factor exposures and weightings to arrive at a true measure of whether the manager delivered value relative to a similarly constituted passive portfolio. Fund expenses are not reflected in our skill metrics including sS. But we consider separately whether a manager’s historic and projected skill justifies what he charges. The methodology behind our approach is explained at the FundAttribution website. Additional information, including free demo, is available to eligible MFO readers. We are not considering here differences in expense ratio.

What we found: 39 times out of 70, the concentrated fund did worse. On average the skill differential was 40 basis points per year, a noticeable shortfall.

To some extent, concentration makes good managers better and bad managers worse. But as the trendline in Exhibit I suggests, on average concentration hurts everyone. This is truer for the focus funds over $1bn AUM. Larger focus funds may be constrained by capacity limitations. In other words, the focus funds are fishing more intensively in a small pond. When the fund gets too large, the pond is overfished and returns suffer. 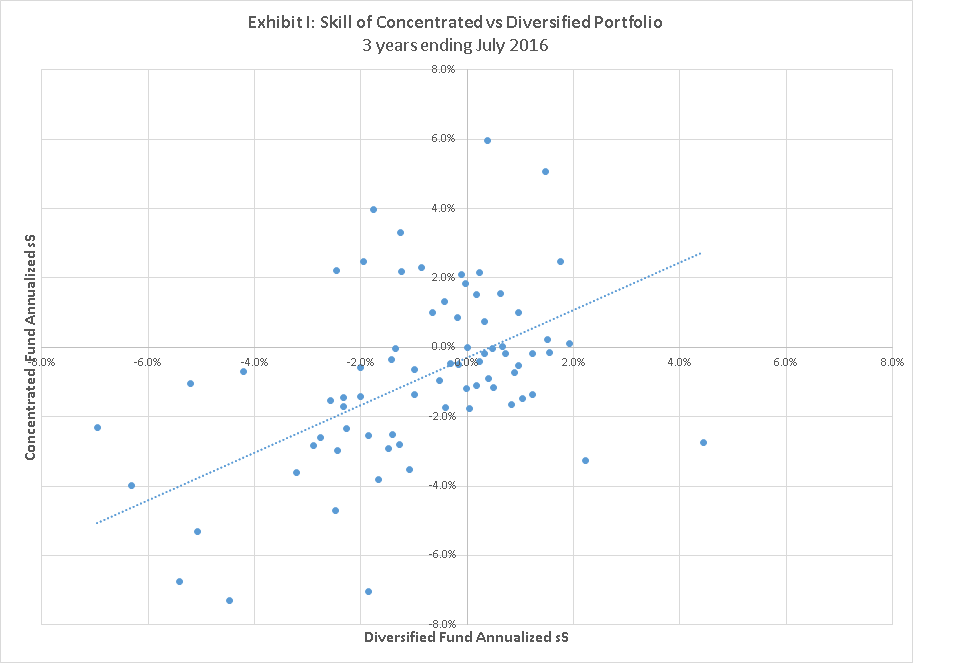 You will notice the scatterplot in Exhibit I is skewed to the lower left. This means the 70 funds are a relatively unskilled bunch, with an average annualized sS of -.53% (and -1% on an unweighted basis.) Had we picked the funds at random, the odds of that occurring are exceedingly small. Our take way: the more skilled managers don’t choose to run several overlapping funds in parallel. Maybe they don’t feel the need, maybe it signifies something about their firms’ investment and marketing culture.

Here are a few examples where investors can choose between a diversified and concentrated portfolio.

Columbia markets the Columbia Acorn Select Fund (CACIX) as a concentrated version of its $5 billion Columbia Acorn Fund (CANIX). Currently, Acorn Select manages just over $300 mm. Expenses run 10 basis points higher than the diversified fund. Although the portfolio managers are different, 26 of CACIX’s  31 positions come from the big fund as of June 30, 2016 — the acorn doesn’t fall far from the other acorn. The average position weighting in CACIX is 4x that of CANIX. Annualized sS for the Acorn Fund was -2% over the 3 years ending July 2016. The concentrated version of the fund registered sS of -2.3% over the same period. One interpretation: the focused portfolio effectively magnified some bad bets. While Acorn Fund did poorly the past 3 years, the long term record for CANIX is positive. Although Acorn select has historically lagged the big fund, it has outpaced CANIX in recent months.

In a piece two months ago entitled Playing Defense, I excoriated managers who rest on their laurels by hewing close to the index while charging very active fees. Playing defense is never an issue with Capital Growth (“CGM”). CGM, based in Boston, is managed by the legendary Ken Heebner. Heebner compiled a pretty good track record at Loomis Sayles and the CGM Focus Fund (CGMFX) was ranked by some people as the #1 in its category for the decade ending 2007. However, the fund lost its mojo and has ranked close to the bottom ever since. Assets are down 90% from peak levels.

CGM Focus Fund has an 80% overlap with CGM Mutual Fund (LOMMX), one of the oldest mutual funds in the country. But CGMFX uses a combination of leverage and focus to sharply overweight the largest holdings while LOMMX runs with negative leverage, allocating 25% to 2 year T-bills. Even excluding the impact of financial leverage and factor exposures, CGMFX has given investors a much rougher ride over the past twenty years. If you invested $1 in CGMFX at June 30, 2016 roughly $.80 would be allocated to homebuilders, building products, and money center banks. These sectors have been untimely and volatile. CGMFX over-weighted two high conviction names: Lennar, which outperformed the homebuilder indices, and Toll Brothers, which lagged. In recent years, sS in the more concentrated CGMFX portfolio has been running neck and neck with that of LOMMX; most of the difference in returns is attributable to portfolio leverage. Investors may excoriate CGM for being wrong and losing boatloads of money, but at least the manager retains the courage of his convictions. Heebner is a prognosticator’s nightmare. But our statistical model gives him a 20% of justifying his 1.13% expense ratio over the next 12 months.

Baron runs a number of funds which address the midcap growth space including the 5 listed in Exhibit II. 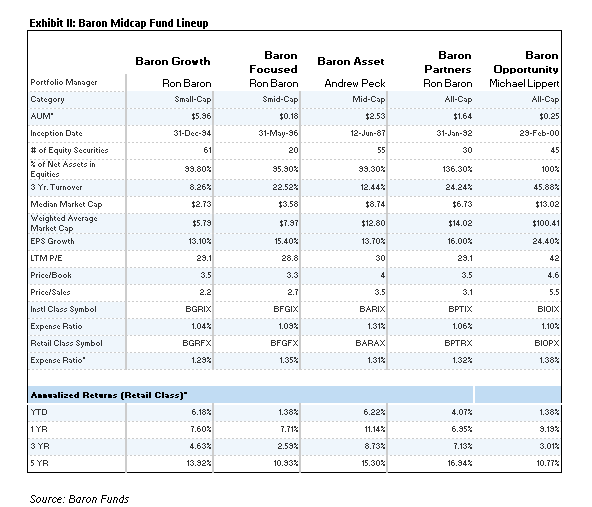 Not all the names in Baron Focused Growth Fund (BFGIX) come from the much larger Baron Growth Fund (BGRIX) portfolio (overlap is only 40%), but the funds are very similar in makeup — except Focused Growth takes bigger positions. Positions from Baron Growth over-weighted in Focused Growth include Vail Resorts, Costar, and Factset Research. Focused Growth also has a 75% overlap with Baron Partners including positions such as Tesla Motors and Hyatt Hotels. Roughly 10% of the ideas are drawn from other Baron portfolios and 5% are unique to this fund.  In our estimation, the focus hasn’t helped. sS over the 3 years ending July has been -2.6% for Focused Growth compared to -1 to -1.5% for the constituent funds.

Despite the nomenclature, Delaware Select Growth Fund (DFSRX) is a broader version of Delaware US Growth Fund (DUGAX). Both funds are actually managed by Jackson Square, a Delaware spinoff. Roughly 80% of the DUGAX portfolio is drawn from positions comprising 50% of DFSRX. Over the past 3 years, the more concentrated portfolio has done considerably better, measured in returns and sS. However, over the longer haul, the two funds have similar return and skill profiles

In theory concentrated funds offer investors more bang for the buck based on greater exposure to a skilled manager’s best ideas. But on average they don’t deliver extra value to the investor, even before considering fees. For whatever reason, the most skillful managers in America seem to avoid these structures. Strategy capacity matters; as the assets in the strategy grow, keep a close eye on the manager’s ability to continue to execute his strategy. Investors should also value fidelity to the strategy on which the manager built his track record.