This month the index fund turned 40. Bloomberg wrote a story suggesting this remarkable bit of financial engineering has benefited investors by close to a trillion dollars. While we think there is an important role for active managers, we noted in this column last month that investors continue to overpay by at least $70 billion per year.

But we take exception to one facet of this otherwise excellent story. The author notes that apart from the difference in stated expense ratios, passive investors benefit investors due to the lower trading costs incurred in index funds and ETF’s. He believes that each point of turnover is equivalent to 1 basis point of hidden expenses. The story credits Vanguard founder Jack Bogle and the industry he spawned for saving investors nearly as much through trading efficiency as through lower expenses.

Turnover’s Not Your Problem

Without a doubt investors owe Jack Bogle a ticker tape parade. But the benefit of trading efficiency is much exaggerated. We suggest institutions and fiduciaries evaluating an active manager should pay close attention to the expense ratio but give little heed to the turnover ratio. For taxable accounts, turnover might matter a little. 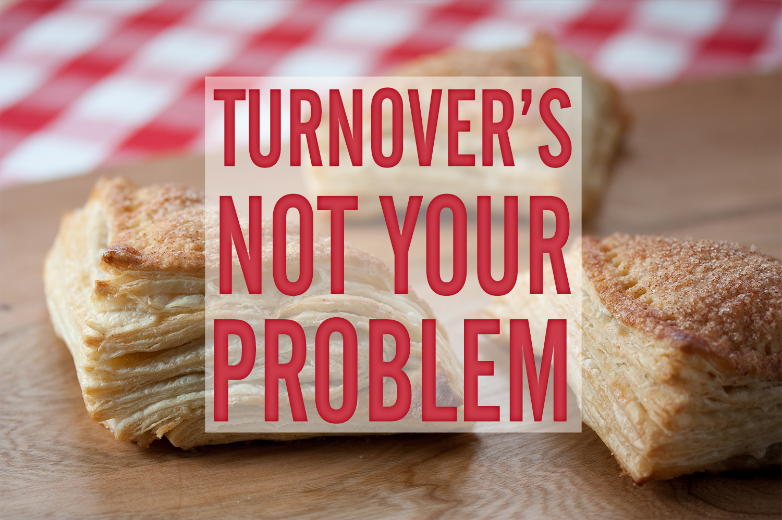 Observation #1: The difference in turnover between an index tracking the S&P 500 and an active large blend is significant. But for other ETFs, especially the newer ones, the difference is smaller.

Turnover is a ratio the SEC requires funds to disclose. To compute it, divide the value of securities purchased (or sold, whichever is smaller) over the past year by average total assets.

The median passive fund (by AUM) has 5% turnover; the average fund has 10%. But, surprisingly, a few passive funds have turnover over 100%. The average active fund has turnover of 42%. There are funds which are managed as “active” with turnovers of 3% or less. These funds are either lazy or exceptionally patient. Examples of “lazy” funds are Cook and Bynum Fund (COBYX) and Gabelli Value 25 Fund (GVCIX.) But there is nothing passive about their expense ratios which exceed 100 basis points.

Observation #2: The impact of turnover on stated returns is quite small. To assess the impact, we reviewed approximately 5000 funds in the Trapezoid database for which turnover and data was available. We looked at the relationship between turnover and skill from security selection (sS.) MFO readers who have visited the FundAttribution.com site will recall that sS is a measure of fund manager skill which takes gross return before stated expenses and adjusts for the fund’s asset mix, factor exposure, and other choices which might explain variations in return between funds. Qualified readers unfamiliar with the site may register for a free demo at www.fundattribution.com.

Trading costs are borne by the fund but are not captured in a fund’s expense ratio. So

we might expect high turnover to be inversely correlated with sS. A regression based on those 5000 funds over the past 3 years shows that relationship does exist, but it is very weak. The regression predicts that if we compared two hypothetical funds whose turnover differed by 32%, sS would differ by just 0.04%. And indeed, when we compare active and passive funds as a whole (Exhibit I) that is precisely what we find.

Our study considers only pre-tax returns. Taxable investors should bear in mind that high turnover funds may not look as good after-taxes.

There are a number of studies which suggest trading costs for a typical mutual fund are roughly 100 basis points per year. Trading costs include not just commissions but spread (differences in bid/ask) and market depth (how much a mutual fund moves the market while entering or exiting a position.) Based on that, it seems surprising the difference in return between active and passive funds is so small. 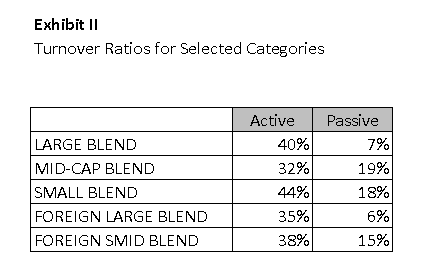 Some researchers think that trading costs are much higher for smallcap strategies than for large cap companies. That makes sense because the portfolio investments are less liquid, so it is harder for funds to trade in an out. But this is not a function of how managers run those portfolios. Turnover ratios for active funds in small and mid-cap are similar to those found in large blend. (Exhibit II)

We spoke to one of the leading researchers in the area, Professor Richard Evans of the University of Virginia – Darden School of Business. “Turnover is the wrong measure. Outflows are the most expensive component of trading cost,” he observes.

If turnover is a bad metric, there is a limit to how much we can adduce from a study which compares skill (sS) with turnover. But it doesn’t explain why the average active fund returns about the same as the average passive fund. If trading costs are really a handicap, there should be a noticeable differential.

Something else is going on. Our best explanation is that the more active funds spend only marginally more on trading than the passive funds. Because active funds don’t have to mechanically track an index, they may have a little more trading flexibility. It is also possible that

There are hundreds of skilled, high-turnover funds

trading costs have fallen across the board or are overestimated in the literature. Also, some studies suggest the funds with high turnover are more skilled, so the skill nearly offsets any trading disadvantage. Finally, there is survivorship bias: the active group woud look worse if we included funds which were shuttered over the past three years;

this would make the impact of trading costs more evident.

There are hundreds of skilled high-turnover funds in our database. We present one example here.

A Nuanced Approach to Investing 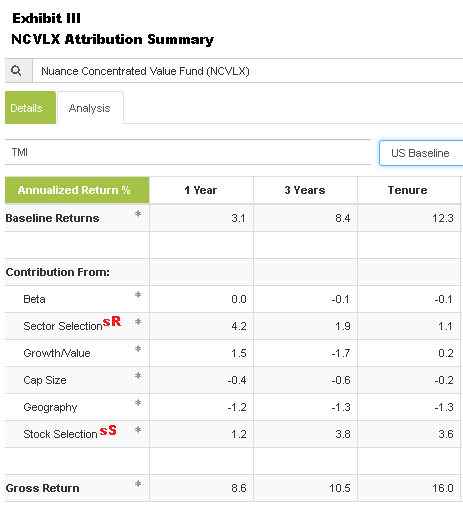 since inception. (Disclosure: I have an investment in this fund.) Co-manager Chad Baumler notes Nuance frequently rebalances the portfolio based on risk-reward metrics. The managers use a combination of qualitative and quantitative analysis to assess normalized earning power of companies they regard as industry leaders weighed down by cyclical or transitory factors. They pay close attention to Sharpe Ratio. The fund is currently very overweight energy and financial stocks, but Baumler notes they are not wedded to any sectors. The turnover comes equally from new names and from adjustments to position size.

The institutional class (NCVLX) made it to the Honor Roll in just 5 years, an impressive feat. This means we are at least 60% confident next year’s skill exceeds expenses. Trapezoid’s evaluation is based on data since 2011. Exhibit III indicates skill from both stock selection and sector rotation. As Exhibit IV illustrates, the firm easily outperformed its peers and benchmarks. It did this despite a Beta of only .83; at times the funds hold a lot of cash. It excels during down markets. Nuance notes that if returns for the Concentrated Value strategy from 2008 (the strategy’s inception) are included, the risk-adjusted performance tops its peer group.

Nuance is a Kansas City-based investment manager focused on midcap and all-cap value. The firm manages over $1 billion, the majority of which is mutual funds. Nuance is controlled by Montage Investments. The fund managers came from American Century. Lead manager Scott Moore led the American Century Mid-Cap Value Fund (AVUAX) and another fund from 2004-08. AVUAX reflected similar on his watch; the fund has continued to thrive since his departure. AVUAX’s turnover is also elevated and on our Honor Roll but it is currently closed.

We worry that skill will degrade if AUMs continue to grow; some of the companies in their universe are not especially large and liquid. However, management seems committed to limiting growth of the Concentrated Value strategy; Baumler expects future AUM growth to come more from the Midcap Value strategy. We don’t rate Nuance MidCap Value Fund (NMVLX) due to its short history, but it is managed by the same team with considerable portfolio overlap and similar expense structure. NMVLX will adhere more closely to the midcap value style box with a somewhat less concentrated portfolio.

Note: Registered demo users of FundAttribution.com have access this month to the All-Cap Value category which includes NCVLX.

When assessing an active fund, reported expense ratios don’t tell the whole story. In theory turnover ratio should give investors insight into “hidden” drag from trading costs. But investors selecting a manager shouldn’t dwell on turnover ratio. Empirically, turnover barely moves the needle and it may not be a good proxy for trading costs. In many cases high turnover is associated with exceptional performance.