The good folks at Morningstar hosted the seventh annual ETF conference in Chicago, its global headquarters, this past month. More than 650 total attendees, including more than 500 registered attendees (mostly advisors), more than 80 sponsor attendees, nearly 40 speakers, and more than 30 members of the press. An increase from last year.

Venue changed to Hyatt Regency Chicago on East Wacker Drive … “the heart of downtown Chicago.” Actually, Morningstar describes this town, which by absolute numbers is the murder capital of the US, as the “a business and financial hub, with a diverse, powerhouse economy … world-class dining and entertainment … and its popular destinations like the Field Museum, Millennium Park, the Shedd Aquarium, Water Tower Place and the Merchandise Mart.”

And, in fact, that is the Chicago I’ve always seen, even as a freshmen attending University of Chicago in South Hyde Park and in all the return visits. Walking its magnificent streets, vibrancy and diversity abound … restaurants, bars, parks, museums. Its skyline breathtaking. Renovation everywhere. Its support for new businesses with the Chicagoland Entrepreneurial Center (CEC) flagship 1871 Project. The south side was also recently selected for the location of the new Obama Presidential Center.

Chicago is particularly beautiful in September. This year did not disappoint. 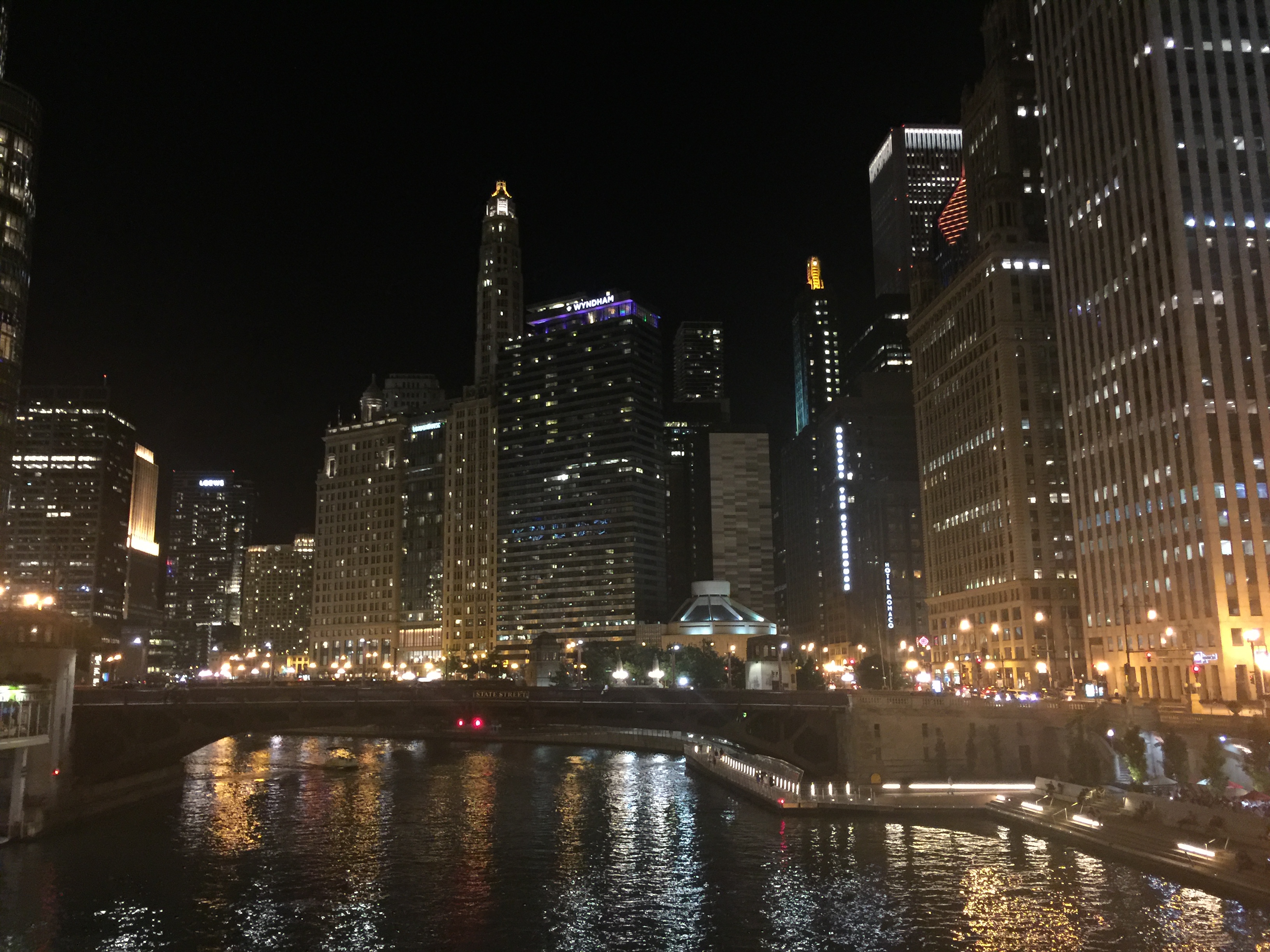 And so, on Thursday night after Day 2 of the conference, I happily joined friends for dinner at a stylish, sprawling, yet full restaurant called Sienna Tavern. During the dinner, our colleague Sam Lee explained, “Chicago is two cities. There is the affluent part. And then everybody else.”

Sam is right, of course. Maybe because of the divisiveness of this presidential campaign, or our polarized and gridlocked congress, or the sensationalized and all-too-common shootings by police of apparently unarmed citizens, but it all seemed out-of-step and dare I say a complete juxtaposition with the pledge recited by millions of children every school day: “… indivisible, with liberty and justice for all.”

A quick review of statistics on ETFs from our Lipper Data Feed Service for US exchange traded funds (ETFs) and traditional open-ended funds (OEFs), reveals the following: through August 2016, there are 1838 ETFs with $2.4T AUM versus 7495 OEFs with $13.4T AUM, excluding money market. (Please see figure below.) 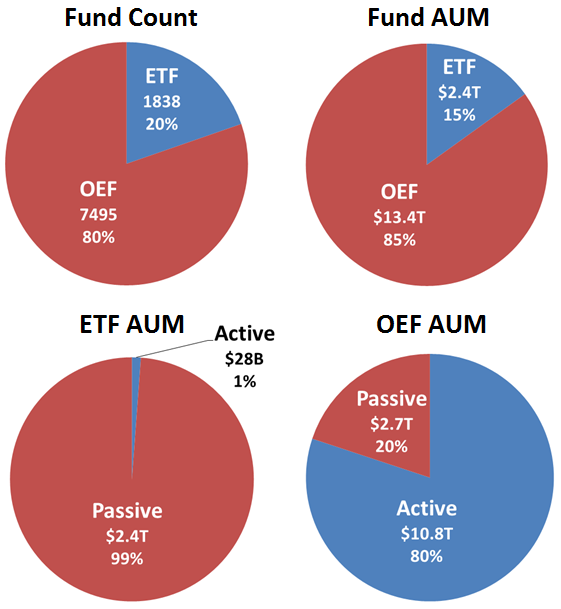 Nearly all ETFs remain index based or “passive.” While, despite the heavy outflows from active to passive this cycle, most AUM remains in actively managed or “active” OEFs, ignoring closet indexers. I suspect OEF AUM is more sticky, which has its pluses and minuses.

The ETF AUM, however, is heavily concentrated in relatively few names, typically pure index funds, like SPY and AGG. The table below shows an elite group … the top ETFs by AUM. These 15 funds, or less than 1% of the ETF universe, represent nearly one third of all ETF AUM. In fact, three-fourths of all ETF AUM is managed by just three fund families: Blackrock (iShares), Vanguard, and State Street (SPDR). 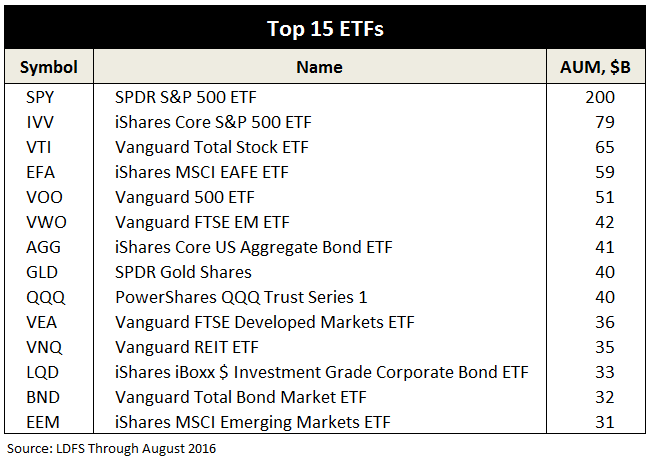 It is interesting to note that the median ETF AUM is only $79M, which is probably unsustainable and helps explain ETF mortality rate.

A prominent announcement during the conference was that Morningstar will soon start giving medal ratings to ETFs, like they do with OEFs. The Gold, Silver, Bronze, Neutral, and Negative ratings attempt to be forward looking or “aptitude based,” says Morningstar’s Ben Johnson, head of Passive Strategies. It will use same “five Ps” (short for Pillars – Process, Performance, People, Parent, and Price) methodology. About 300 will be rated along with OEFs in same category.

While no plans yet to merge conferences, it seems inevitable for June and September Morningstar Chicago conferences to become one.

Given migration of assets from active to passive funds and other themes touched on during the conference, it occurred to me that the quants seem to be winning, especially if you consider index funds a form of quant products, perhaps the first.

Market cap index investing certainly making a lot of smart money managers look not so smart these past several years. Everyone would have been wise to simply invested in SPY or VFINX or VBINX back in 2009 and forgotten about it, as can be seen in performance table below (click image to enlarge).

Quants believe that most, if not all, of a money manager’s alpha can be decomposed into a series of factor tilts, like value, small, or momentum. As AUM continues to move out of traditional active into more passive alternatives, I suspect the battle will be between “tilt premia” instead of between market cap index and bottom-up investors.

John Ameriks, head of Vanguard’s Quantitative Equity Group, believes that a big reason “quants are winning” is that they provide “rules-based methodologies so investors better know what to expect.” Unlike, say, the sometimes surprising behavior of active investors, like Fairholme’s Bruce Berkowitz. John’s group has 25 analysts and has been in existence for 25 years and currently manages $30B in AUM.

Vanguard offers 70 ETFs with AUM totaling $525B. So, with just 4% of products, Vanguard has captured more than 20% of the AUM. Can you believe that? Our fund family data on the MFO Premium site shows that 60 of their 70 ETFs have beaten their peers since inception. That’s simply amazing. Rich Powers, head of Vanguard’s ETF Products, had a quick response: “The power of low fees.” Vanguard is the only company to offer some ETFs as simply another share class of its open-ended sibling. “Economies of scale,” Rich explains.

Morningstar always does a good job reporting on the presentations, which can be found here, so I will offer just a few other observations.


She gave the opening keynote. She is neutral on all markets … US, Foreign, and yes even EM. “Neutral” means hold current allocations based on risk tolerance and re-balance on volatility, like last February with the Brexit over-reaction. Re-balancing creates a built-in value premium.

The biggest threat to market stability is global debt. While private sector has deleveraged after 2008, the public debt has never been larger. But she believes 2008 was the “big quake” … going forward has been and will likely continue to be a series of tremors until the monetary policy experiment plays out.

Most politicians don’t understand difference between deficit and debt. US deficit (yearly debt interest payment to GDP) is quite low. But overall debt is very high. That doesn’t even recognize entitlements. Inevitable for our entitlements to be addressed … “politicians just don’t want to discuss it.”

Chance of recession in foreseeable future is low, based on Schwab’s multi-factor analysis. For example, leading economic indicators remain below 2007 levels, so still room to run. Recessions are normally the result of excesses. US equity valuation is somewhat elevated (based on forward P/E), but this bull market has never been embraced. So, echo John Templeton …

She thinks we are stuck in a “skeptical” environment, perhaps leaning toward optimism.

Part of the skepticism is due to the two 50% drawdowns (an equity and debt bubble) since 2000. Most of the private investor money remains dubious on the market. Like sentiment during Great Recession. Not a single net dollar has flowed into US equity combined OEF/ETF market since 2007.

Presidential race remains too early to affect markets, at least that was Schwab’s view in early September. Being an “8-year” election where an incumbent can’t run, likely more uncertainty. She believes the higher a polling margin of victory, the more stable the markets. (She personally thinks the choice of two of the most disliked candidates is disappointing.) More important than the president on economy, is the impact of election on a gridlocked congress.

And, similarly, for better or worse, more than active versus passive or quantitative versus fundamental, current markets are driven by macro-economic assessments versus business fundamentals of individual companies. So much for guidance of Peter Lynch and Warren Buffett and Eric Cinnamond. For time being anyway.

Finally, she believes that there are more savers than debtors in country so if savers are not making any money, they can’t fuel the consumption economy. Ditto for negative interest rates globally … having opposite effect of intended. Time to get back to normalization of interest rates to help economy.

Rich Bernstein, John West of Research Affiliates and Mark Yusko of Morgan Creek Capital Management seemed mostly conflicted. Bernstein believes cyclical equities and perhaps equities as a whole, will continue their bullish run. Expects excess returns the next two years for industrial’s. But, the catastrophe will be bonds.

Yusko, the most vocal, believes US stocks will crash in next year or so. Doomed based on valuations and demographics. He thinks that the only thing investors do well is invest in the last thing that worked. So, investing in index funds going forward will be catastrophic. While he dropped names like Seth Klarman of Baupost, Yusko’s positions seemed to contain a lot of … hmm, what’s a good word … hyperbole.

West was most tempered of the trio, touting Research Affiliates benefits of all asset diversification, which always takes the ten year view.

He gave the closing keynote. An industry stand out. His presentation was about the inherent conflicted nature of delivering alpha and accumulating assets. Basically, the more AUM, the more holdings a portfolio must maintain, the more it then looks like an index, the less likely its performance will deviate from the index. “Scale eats returns.” 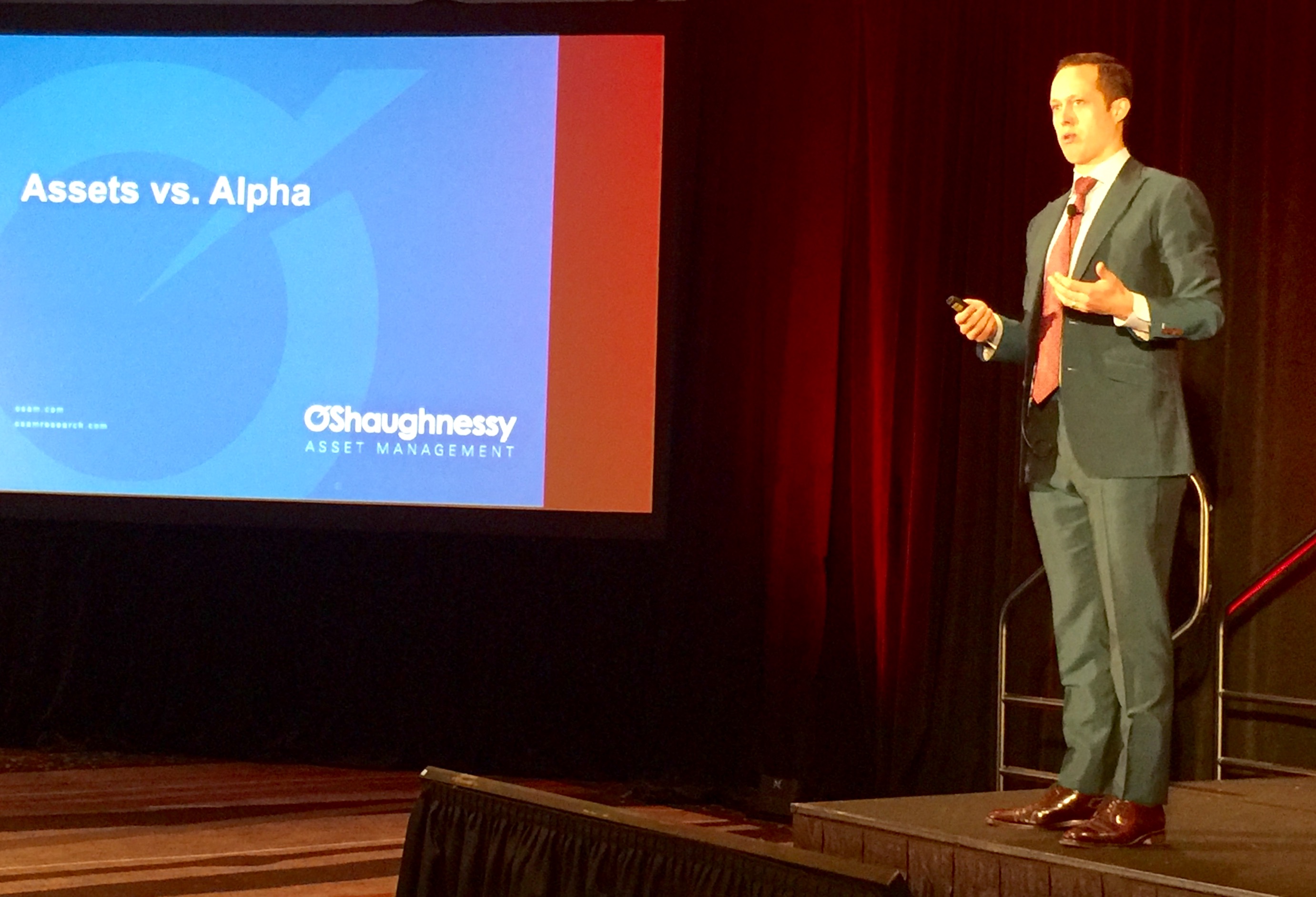 He sees active share as a measure of the potential to be better (or worse) than index. “Dare to be great.” He thinks both Wes Gray and Meb Faber are offering ETFs closest to the strategies he recommends. That said, he admits there are only a few money managers he would trust with his money. (He would not say which ones.)

Here’s link to Patrick O’Shaughnessy’s Commentary page. He’s a true student of the markets. And, here is link to the paper he briefed in Chicago, Alpha or Assets?