The fund seeks to provide long-term capital appreciation primarily by investing in locally listed large, medium, and small quality companies broadly accessible to U.S. investors within Asian Emerging Markets. The Adviser conducts on-the-ground research to provide direct insight into these companies using its domain expertise in the region, and while it may invest in companies from any emerging market country, it expects to focus its investments in Asia.

The fund is intended for long-term investors who have a time horizon of at least 5 years but preferably 7-10. It was first mentioned in the April 2015 edition of MFO as “Emerging markets funds that might be worth your attention.”

Reason for Launching the Fund

Before its manager, Anindya Chatterjee, joined City National Rochdale, he was working for Rochdale Investment Management, a boutique firm that wanted to launch an emerging market strategy. He met with a group of investment professionals, traveled with them to India for more than six months, and in the process convinced the board of his investment thesis for EM. Because of his sell side research, domain knowledge of Asia, and always wanting to manage money, he accepted the challenge of running the fund, the N class RIMIX, which CNR launched December 14, 2011.

After Morningstar gave RIMIX its 5-star rating in January 2015, CNR began offering RIMIX in March 2015 to those outside its HNW clients, who, having managed accounts with financial advisers, were already fully allocated to emerging markets. That was the only way the fund could grow. Also in March, the firm decided to offer a new share class without the 12-b1 fee, but because it takes some time to launch a new product, the fund first opened in June 2016. Currently, all assets are being moved into CNRYX, which now has $853M, and RIMIX $143M. The remaining assets of RIMIX will be moved in the next six months. All shareholders will then have a class without a 12b-1 fee and a lower expense ratio.

City National Rochdale. A subsidiary of City National Bank (CNB), the firm currently offers 13 mutual funds and has provided investment management services to individuals and businesses for over 25 years. As of June 30, 2016, CNR had approximately $29.9 billion in AUM.

Anindya Chatterjee He has managed the fund since inception in 2011. Prior to joining Rochdale Investment Management (the predecessor to CNR), he was President at India Infoline (IIFL) in Mumbai working with U.S. institutional investors, earlier as Managing Director and Head of Emerging Markets Asia Equities Research at Jefferies, and as Asia Equities Strategist at Bear Stearns. With 20 years of research experience covering Asian financial markets, he is assisted by senior equity analysts in Hong Kong, Arun Narayanan and Jocelyn Nga-Man, CFA; by Joseph Block, an emerging markets trader in New York; and the On the Ground Research Channel Check Team in Hangzhou, China and Mumbai, India.

The fund, currently at $1B AUM, plans to close to new investors at an AUM of between $3.5-4B. Because the fund has a mid cap bias and values liquidity, it is size restricted and not a strategy scalable into a large mega cap offering. While not easy to put a hard number on future capacity today, if the companies the fund holds now should increase in the next four years in size, profits, equity base, and liquidity, then closing at $3.5 – 4B would be necessary. The manager has no intention of letting the fund become a benchmark-hugging behemoth unable to seek alpha or consider high growth mid caps often flying under the radar.

One can buy the fund directly from the Fund’s Transfer Agent, U.S. Bank (866-209-1967) with no minimum. CNR is in the process of putting application forms for purchase on its site. Other options: TDA: NTF, no minimum for a basic or IRA account; Scottrade: $100 in a basic and an IRA but with a $17 transaction fee. Fidelity and Schwab have the fund available with higher minimums and much higher transaction fees. The fund is unavailable at Vanguard. 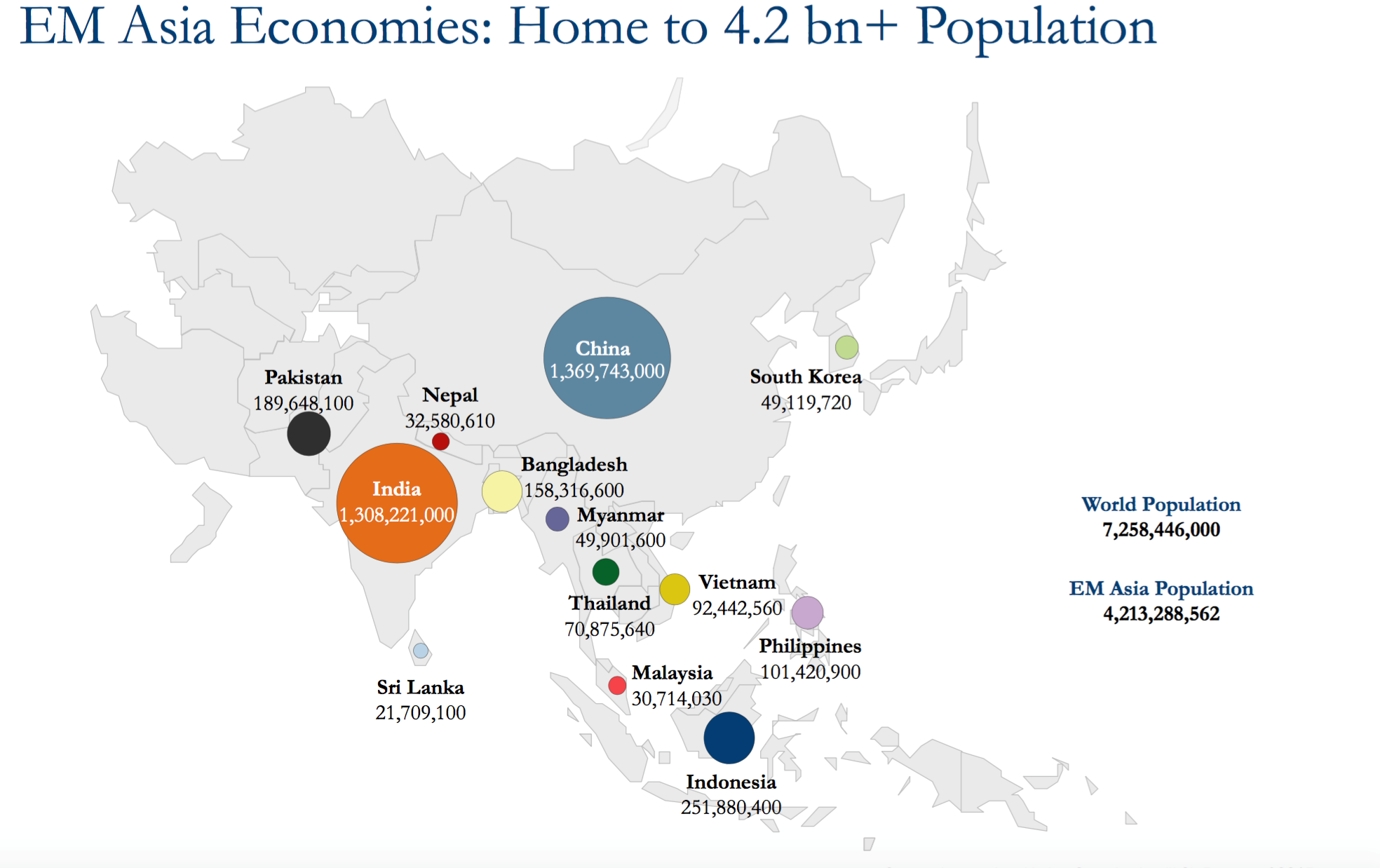 Based on U.N. data, EM Asia has 4.2 billion people with 60% of global youth (age 15-25) and is the region with most favorable demography bell curve. Demographic dividends would come from a steady supply of young people entering the workforce, helping to sustain high economic growth rates; resources for investment and consumption momentum concentrated in its growing number of mega cities; and competitive wages. The region is characterized by rising real incomes, productivity, and a high savings rate. Growth appears sustainable long-term as investments are funded by this high domestic savings rate, and coupled with high investments, should support future economic and EPS growth.

According to the fund, characteristics like these make emerging Asia the “sweet spot” for investment and those that will produce superior returns.

Finally, recent EM performance has been disappointing, but its long-term attractiveness remains unchanged and its EPS growth and valuations keep EM equities attractive.

The fund determines country allocations in each of the Asian EM markets by assessing multiple macro variables and market valuation measure, for example, the liquidity environment, interest, and inflation rates. Second, it determines sector allocations by assessing variables such as growth prospects, domestic demand scenarios, and valuation. Last, the fund chooses companies by a detailed analysis of company management, the quality of its earnings, and valuation. Based on this bottom-up process, the fund then chooses its investments, trying to pick its potential outperformers from its “Investible Superset” of eligible companies through a boots-on-the ground analysis. 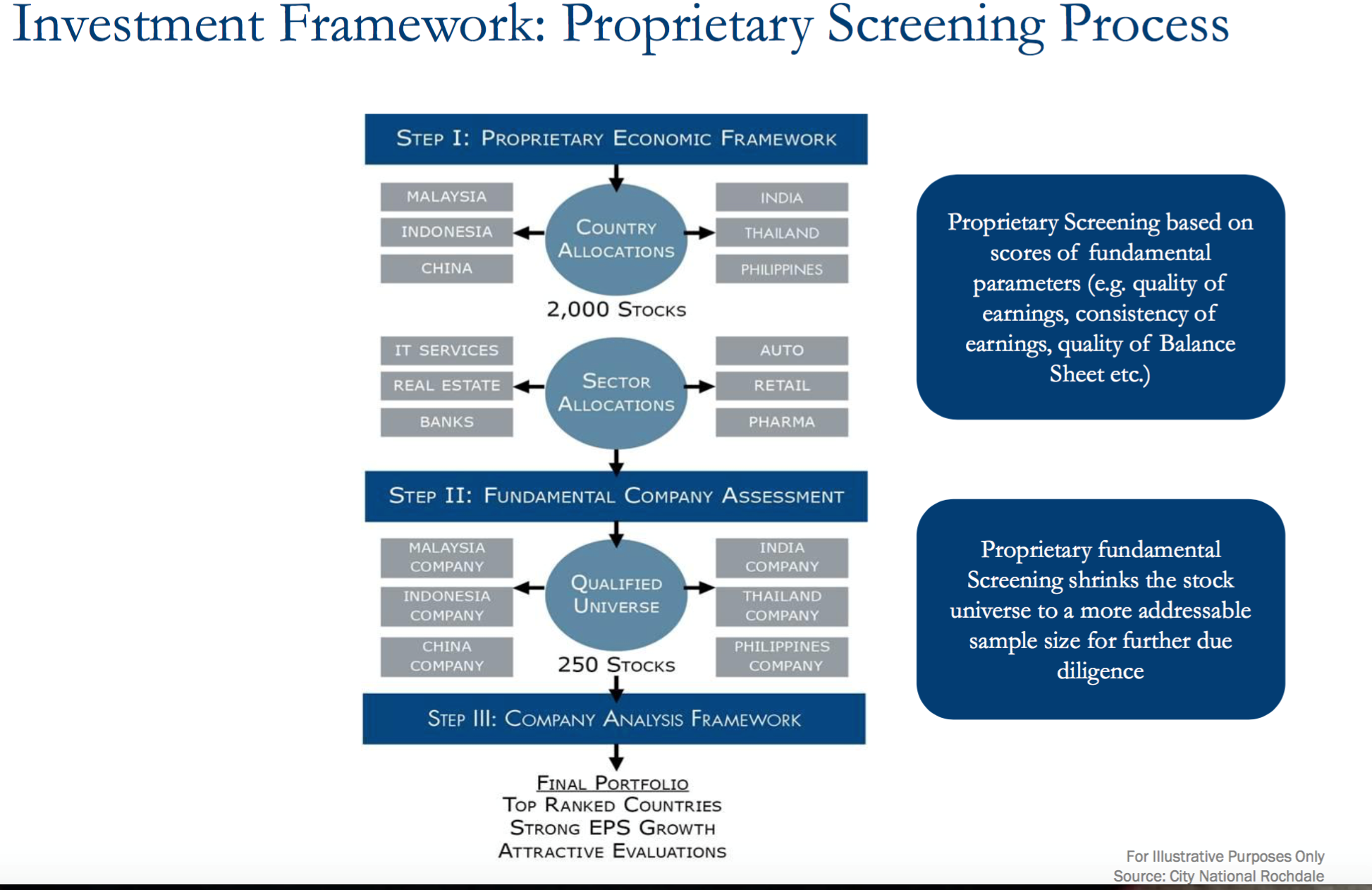 Having evolved over time, the process allows the team to find approximately 250 stocks in countries it should invest in and then build its own financial models. Most of these companies, followed by just a few analysts, need additional proprietary work before buying them. Very disciplined and bottom-up, the process focuses on finding companies that the fund wants to own for 3-5 years without having to research all of the stocks in the region.

The challenge is finding the best companies at the right time, what value to invest, and for how long. For example, the fund did not buy Alibaba at its IPO price of $130 but at $68-$69; on the other hand, it bought Tencent, currently its top holding, at the IPO price.

Boots on the Ground

The term describes the funds due diligence, bottom-up approach, and domain experience. For example, in 2015, the research team undertook 262 analyst calls, 370 management calls, (an effective time of 645 hours); 63 conference/roadshow/reverse roadshows (an interaction with 449 corporate managements, policy makers, and industry experts); and conducted several direct and proprietary checks in each of its invested markets and sectors.

When China and the emerging markets were selling off during the first quarter, Mr. Chatterjee made two visits to Asia, visiting 44 of the fund’s companies on his first trip and 10-15 on his second. He found that the earnings of these companies were pretty robust and his investment thesis intact.

Before investing, the fund builds detailed company financial models and determines the “true intrinsic value” of the company.

The fund does not keep an active share statistic; however, the portfolio is significantly different than its benchmark, the MSCI EM Asia Index. For example, Korea and Taiwan comprise 38% of the index, two countries where the fund does not invest because they do not have the long-term growth potential or the quality diversification that investors want. They are not emerging. Investing in them will not help the fund outperform its benchmark.

The company market cap of the fund is 38% > 10B, 37% > 2B-10B, and 25% < 2B with an average market cap of 3.2B. It seeks to identify mid cap companies that are often less followed, reasonably valued, have growth potential within its domain, with credible managements and business strategies that will succeed.

The fund defines risk as not knowing the outcome of earnings visibility, revenue, profitability, and all of the other variables in between – interest rates, raw material prices, and everything else. Furthermore, liquidity risk is an element the fund seeks to minimize trying to have a risk adjusted return relative to its benchmark, the MSCI EM Asia Index.

The MFO Premium slice of RIMIX/CNRYX shows a distinct high return-low risk profile against its peers since inception especially when looking at its Sharpe, Sortino, and Martin ratios.

The capture ratios are for the three-year period ending June 30, 2016.

Mr. Chatterjee points out that the risk-adjusted performance of the fund is relative to a benchmark that is obsolete in terms of how the fund invests. For example, if one used an index that included China, internet companies, e-commerce, China consumer staples, China consumer discretionary, India software companies, southeast Asia consumer holdings, then the fund would perhaps be seen as hugging that benchmark with parameters like sharp ratios and others redefined.

While the fund invests in only six countries of the 23 that comprise the MSCI EM Index, the same six countries of the eight in the MSCI EM Asia Index, it has shown the manager’s skill in executing his thesis about the region with its focus on its macro trends. While everyone knows about these trends, his process is bottom-up, disciplined, and focused on the pure consumption space within emerging Asia. He is not invested in Old China, manufacturing, or cyclical companies. Domain knowledge is important because what works in one market will not work in another.

While the fund was down 2.62% in 2015, it still outperformed 90% of emerging market funds for the fourth straight year from inception to December 14, 2015 because of allocation and stock selection, avoiding weak emerging markets such as Brazil and significant underweights in energy and commodities.

Although the EM Asia Index has risen more than the broad EM Index since the fund’s inception on December 14, 2011 to September 13, 2016 and benefited the fund’s exposure there, it has also outperformed when these markets have been weak. 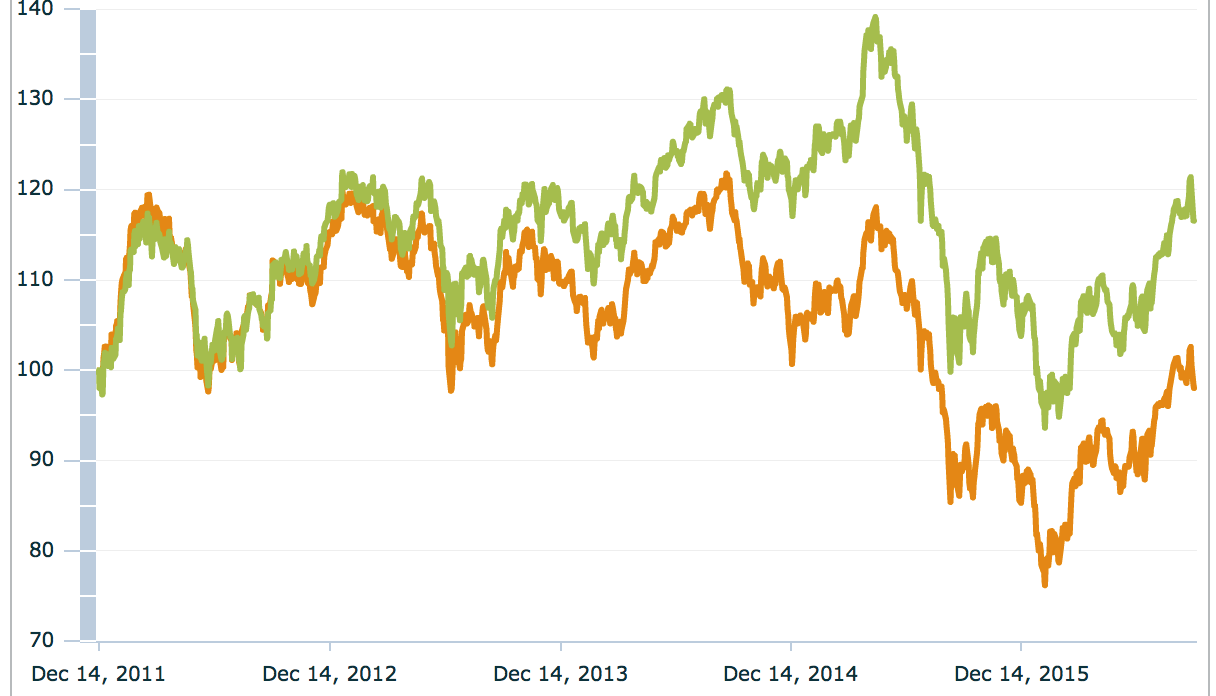 The fund has lagged the MSCI EM and Asia EM Indices YTD mostly because countries like Brazil and others have risen but where the fund does not invest.

For example, based on their price returns, the MSCI EM ex-Asia Index returned 19.5% through September 15, 2016; the EM 11.9%; the EM Asia 9%; and the EM Latin America 27.3% (ex-Brazil 3.62%). The manager knows that under-performance will occur at times but also believes that his focus in emerging Asia will produce superior returns long term. 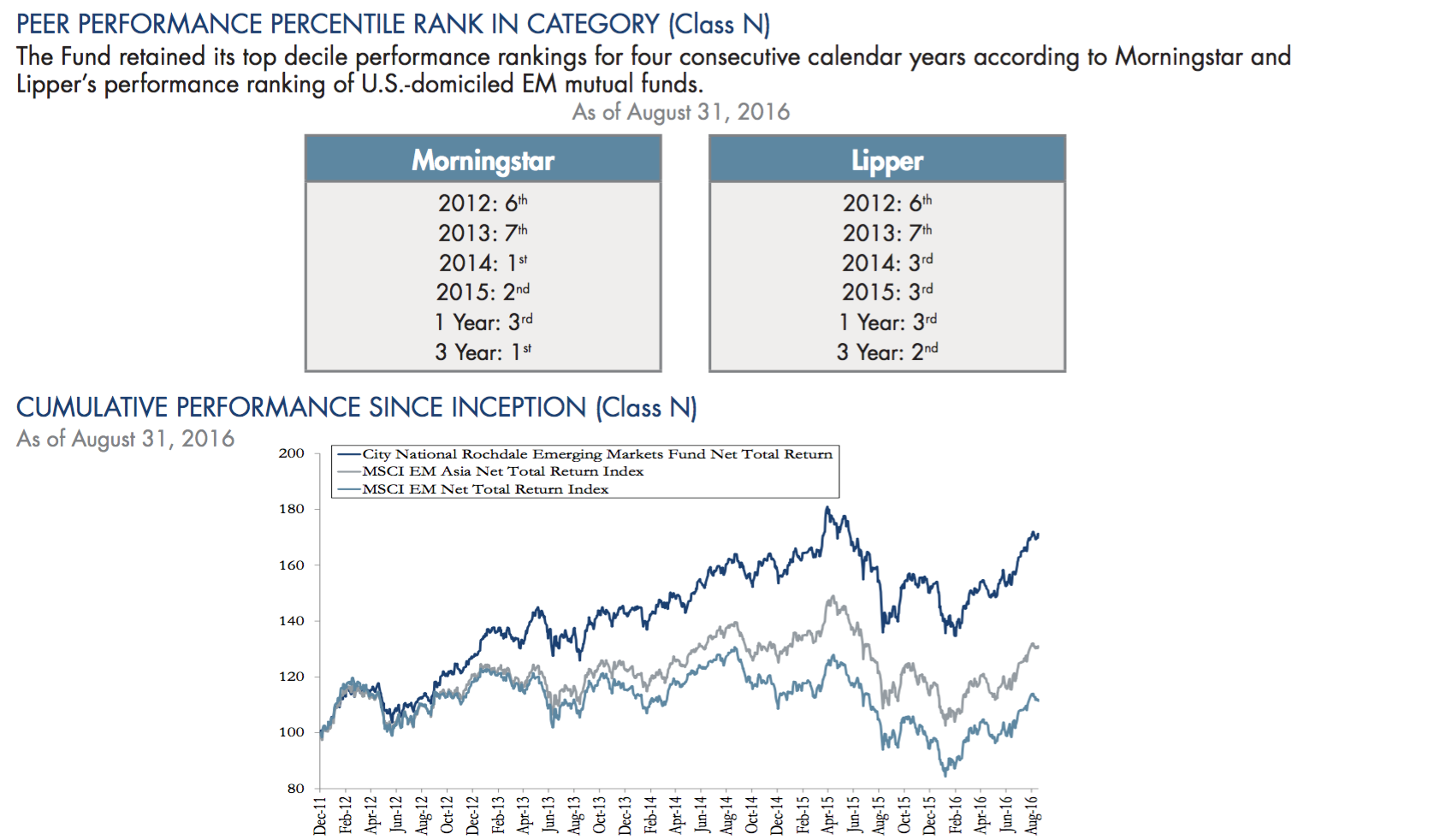 CNRYX offers an investor exposure to emerging markets by its concentrated strategy in Asia. Since inception, the fund has adhered to its six-country Asian allocation and not included other EM Asian countries or EM countries outside of that region in any meaningful way. The manager believes that the long-term positives of the region discussed here can become a virtuous cycle that could last for decades and lead to fund outperformance. The results thus far support that thesis: the fund has earned a five-star designation from Morningstar, is ranked highest by Lipper in total return, consistent return, tax efficiency, expense, and is a MFO Great Owl.

Because of its concentration, the fund may underperform at times. However, its historical performance has shown consistent strong stock selection when its allocation has been out of step but also been absent in markets going down.

The fund uses a disciplined research process and its domain knowledge with boots on the ground to choose companies, many under-followed, based on its bottom-up research. To maintain its flexibility, the manager will close the fund at a specified AUM.

Despite the fund’s almost five-year existence, it is not widely known by retail investors. The funds were not marketed to retail clients but created as an asset allocation tool for their managed client accounts with financial advisors. Most of the AUM in these accounts is held at various custodians.

Finally, the issuance of the new institutional class CNRYX as of June 1 gives every investor – managed account, institutional, and retail – the option of owning a product with many engaging attributes and a deep dive into Asia emerging EM.