Twelve months ago, the headlines were apocalyptic:

As usual, we suggested that people execute The Observer Stop Loss. Here were the steps:

Actually it’s “do nothing with your portfolio for seven days.” We’re not advocating fasting or neglecting the kids or anything.

Predictably enough, in the 12 months following the media howling and the investor panic, the emerging markets beat the tar out of all of the “safe” alternatives:

The question of what  to do now is answered, in part, by looking backward: try to plan now to avoid repeating the mistakes you made before. If you bought and held gold and gold-related stocks, good. You’re up 90%. If you bought and sold your funds weekly, based on whimsy or some half-conceived timing scheme, you might want to check your personal rate of return (most brokerages calculate it for you). If it’s much under 9% (the returns on a 60/40 balanced fund), you really need to slow down and simplify.

Part of the answer, though, must be forward-looking. What is priced now to perform well in the future?

If the future returns to “normal,” the investments that worked in the past five years are likely to suffer most in the years ahead. The panic about weakness in the global economy has driven central bankers to pursue an unprecedented course: driving interest rates worldwide below zero for the first time in 5,000 years. “Fitch Ratings released a report calculating that there are $11.7 trillion worth of bonds carrying negative interest rates. That represents almost half of all sovereign bonds in developed countries” (“The Weird New Normal of Negative Interest Rates,” Foreign Policy, 9/7/2016).

That distorts behavior: neither pension managers nor savers can meet their goals with fixed-income securities paying zero or less, so they begin migrating to “bond-like” stocks, generally mature, low-growth companies with stable cash streams and healthy dividends. The unprecedented demand for such stocks drives their prices up and, in consequence, their dividend yield down. That, in turn, drives investors further afield.

When interest rates begin to climb, there’s apt to be a noticeable correction in prices.

Where should you be when that particular tide goes out? A surprising number of serious researchers have concluded that your best choices lie in the emerging markets. The most detailed chart of likely risks and returns in the decade ahead comes from Rob Arnott and the researchers at Research Affiliates. 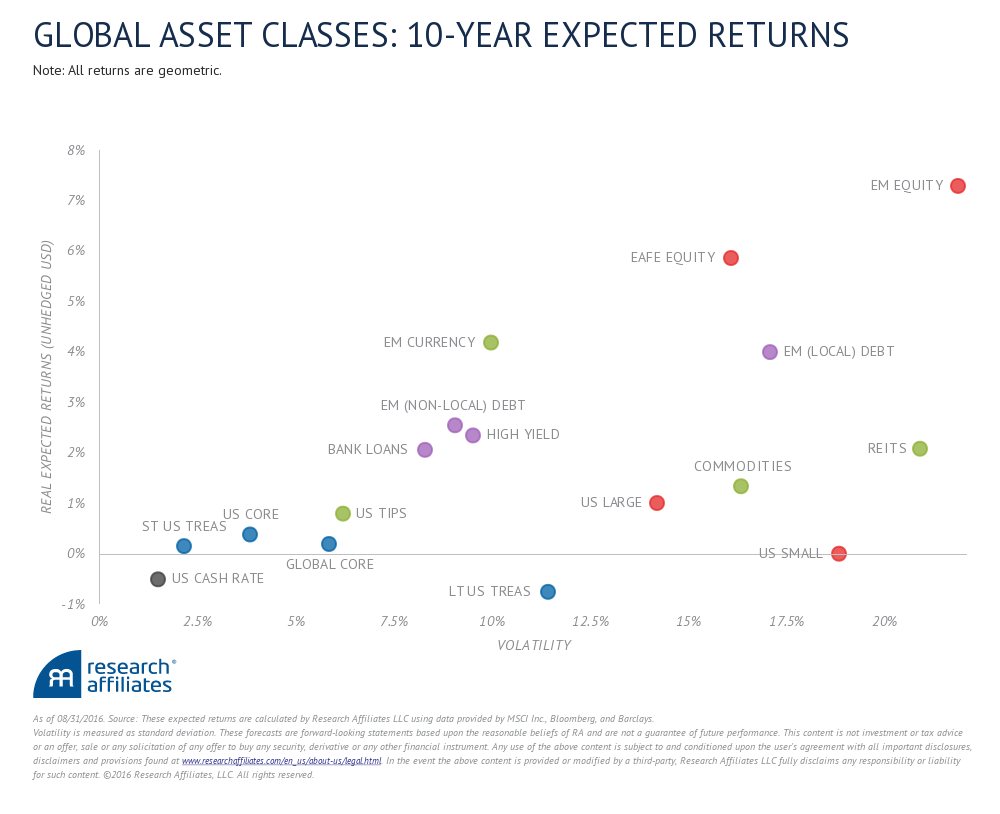 You might notice the no domestic asset class is priced today to return more than 2.3% annually in the years ahead. U.S. stocks are projected to earn under 1% and long-term Treasuries less than zero. Every asset class that might earn 2.5% or more is international and, primarily, emerging.

GMO’s most recent asset class projection is a bit gloomier but has the same preference for emerging markets: EM equities are poised for 3.3% real returns over the next seven years while US large caps are priced for 3% losses. EM is barely positive, US debt is noticeably negative.

That’s led the Leuthold Group to conclude that “our EM Allocation Model triggered a BUY at the end of August after 5.5 years in bear mode. This upgrade is consistent with a cyclical leadership run of one to four years relative to Developed Markets.”

Long-term investors likely need to reconsider their exposure to the emerging markets. If you were part of the trillion-dollar outflow, you might need to re-establish a position. With Seafarer Overseas Growth & Income (SIGIX) now closed to new investors, we suggest that you:

In last month’s issue, we looked at the top-ranked funds in light of their correlation with Seafarer Overseas Growth & Income (SIGIX). One of our readers, Dennis Baran, was intrigued by the five-star City National Rochdale Emerging Markets (RIMIX) and privately shared an extensive analysis of it with us. We asked Dennis if he would consider refining the analysis and sharing it with our other readers. He very generously agreed. We’ve published the result as our fund profile for RIMIX this month.