“Twenty years from now you will be more disappointed by the things that you didn’t do than by the things you did do, so throw off the bowlines, sail away from safe harbor, catch the trade winds in your sails. Explore, Dream, Discover.”    Mark Twain

With June, we have had the coming of another Morningstar Conference. Repeatedly I studied the agenda. I could not see anything I thought worth hearing. Rather than presenting many of the leading investment professionals of the mutual fund world, this year the key seemed to be showcasing of the Morningstar internal talent that was going to allow investment intermediaries to no longer worry about selecting investments. Morningstar would do that for them, letting them focus on marketing, client retention, and overall business strategy. This was a break from the past, at least the past that I remember from when the conference was being held at the Hyatt Regency on East Wacker Drive.

One of the things that I noticed was those mutual fund managers who used to make a point of attending the conference were not attending this year. Now granted, most of them fell into the category of being with smaller boutique operations. And most of them did not attend for any of the wisdom that was being disseminated at the conference. They would come to see people outside of the conference. This year the answer I received almost uniformly when I asked why they had decided not to attend? Few if any of their clients were attending. One concludes that subjects like “How to Hire – and Fire – Funds in a Portfolio” or “Big Data, Machine Learning, and AI in Portfolio Management” were not sufficient motivators in and of themselves to bring people to Chicago at the beginning of June.

Next year the conference will be a month earlier, at the beginning of May 2019. We can stay tuned for the next iteration then of Morningstar’s relatively new CEO, Kunal Kapoor, and his Flying Monkeys. 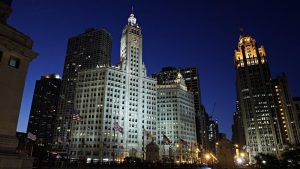 Roughly contemporaneous with the ending of the Morningstar Conference this year was an announcement in the Chicago media that “billionaire” Joe Mansueto, through his newly formed real estate group Mansueto Properties, was purchasing the Wrigley Building in Chicago for a reported $255M. In 2011 you could have bought the building and an adjacent parking garage for $33M. The parking garage was subsequently sold separately for $42M in 2014. This proves two things: (a) in real estate investing, timing and location are everything and (b) better financially to have been the founder and principal original shareholder of Morningstar as a public company, all other things being equal, than a Morningstar subscriber.

Can Your Fund Manager Be Fired?

Some years ago, I had an acquaintance who was an analyst and then a fund manager with T. Rowe Price. About a year and a half into her tenure, I ran into her at an investment conference. I asked her how she liked being a fund manager. It was clear the pressure was an issue, other than the self-imposed pressure that most of us feel when dealing with client money. She indicated that managers at Price had a limited time horizon for sub-par (sub-benchmark) performance, after which they would be replaced as a fund manager. That period was somewhere between three and five years. It has struck me since then that an interesting governance question is whether your fund manager can be removed for performance reasons. Obviously, in situations involving moral turpitude or securities law violations, changes can and are made. But what about removal solely for reasons of lagging performance?

At one extreme you have Vanguard. There, much like the KGB, it is not unusual for a poorly performing fund to see a manager or management removed, often very much almost in the middle of the night when no one is looking. At the other extreme are situations where the lead fund manager is the primary owner of the investment firm, e.g., a Cook & Bynum Fund, a Davis New York Ventures Fund, a Sequoia Fund and you are unlikely to see fund manager changes as quickly, if ever, as you would at a Vanguard or T. Rowe Price for performance reasons. Elsewhere, you must look at both firm and fund structure. At Oakmark you are never going to see Bill Nygren or David Herro removed from managing a fund solely for performance-related issues. And then there are firms like Dodge and Cox which make the issue moot given a committee rather than star-based system of portfolio management. This leads to both consistency of culture and philosophy as well as a sustainability of the investment methodology.

Where do the trustees of the funds fall in these matters? Well, again it depends on structure and the specific nature of the organization. Years ago, we saw the removal of Donald Yacktman from the Selected American Shares Fund that he was managing (by the trustees), which ended up being a disaster. Likewise, the removal by the trustees of Jim Gipson and his firm from managing the Clipper Fund and their replacement by Chris Davis and his firm, also initially could have been labeled an unmitigated disaster. And while it has worked out over time, the Clipper Fund is now a very different fund than it was originally.

The point of this discussion. Think carefully about why you are investing in a fund. If it is short-term and you are following a manager’s hot hand, that is one thing. But if it is long-term retirement or family-office type endowment money, think carefully about the structure and organization that you are partnering with. Because in taxable accounts, you may find moving an investment with an unplanned for or unacceptable manager change may be a double whammy in terms of the tax consequences, on top of a change in investment philosophy and methodology.