LS Opportunity Fund pursues three goals: preserving capital, delivering above-market returns and managing volatility. “The secret,” says manager John Gillespie, “is to avoid large losses.” They invest, both long and short, in individual stocks; they do not short “the market,” they don’t use esoteric options and they don’t typically use ETFs. They normally will have 20-40 short positions and 50-70 long ones. The long portfolio is both all-cap and value-oriented, both of which are fairly rare. The short portfolio targets firms with weak or deteriorating fundamentals and unattractive valuations.

Long Short Advisors of Philadelphia (LSA) launched the fund in 2010 and, after a solid five-year run with a different sub-adviser, brought in Prospector Partners in May 2015 to manage the portfolio. Prospector Partners, which is headquartered in Guilford, CT, was founded in 1997 by John D. Gillespie. Prospector defines itself as a value investor with a distinctive emphasis on investing from a credit perspective. They also manage institutional private funds and separate accounts, along with their two Prospector funds. Prospector manages about $740 million.

John D. Gillespie, Kevin O’Brien, and Jason Kish. Mr. Gillespie is one of Prospector’s founders and its president. He has managed the fund since May 2015. From 1986-1997, Mr. Gillespie was with T. Rowe Price where, among other things, he managed the Growth Stock Fund and New Age Media Fund (originally a closed-end fund that morphed into Media & Telecommunications, now called Communications & Technology Fund). He also serves on the Board of Trustees for Bates College, an alma mater. Mr. O’Brien has been a portfolio manager at Prospector since 2003. Before joining Prospector he spent seven years with Neuberger Berman, rising from analyst to managing director, and several years with White Mountains Advisors. He earned the Chartered Financial Analyst designation in 1995. Mr. Kish has been with the firm for 20 years. He’s a graduate of Providence College, received his Certified Public Accountant designation in 2000 and his Chartered Financial Analyst designation in 2004. The CFA designation is a significant predictor of manager performance. The team is supported by four analysts.

$2 billion. The strategy currently holds nearly $420 million, the majority in a long-established LP.

Management has over $2 million invested in the fund and collectively they have “significant personal investments” in the strategy, beyond those in the mutual fund.

The fund launched in September 2010, but with a different sub-adviser and strategy. Prospector Partners took over on May 28, 2015; as a practical matter, this became a new fund on that date. Prospector has been managing the underlying strategy since 1997.

Expenses are capped at 1.95% on assets of $51 million, as of July 2018, and management plans to continue to reduce these fees as the assets grown.

We last profiled LS Opportunity in March 2016. At that point, the team from Prospector Partners had been in place for under a year; their performance was promising but too brief to allow for anything more than tentative support.

The team has now completed their third year running the fund and their 20th year running the hedge fund which it emulates. The record is now clear and unequivocal: this is a first-rate fund, and it deserves your attention.

The argument for a long-short fund is simple. Most investors who want to reduce their portfolio’s volatility add bonds, in hopes that they’re lightly correlated to stocks and less volatile than them. The simplest manifestation of that strategy is a 60/40 balanced funds; 60% large cap stocks, 40% investment grade bonds. Such strategies are simple, cheap and have paid off historically.

Sadly, we can’t live in the past and virtually every credible long-term investor anticipates vastly lower returns and substantially higher volatility.

Over the past five years, the US market has returned 13% annually with 10% volatility. That’s measured by the performance of Vanguard Total Stock Market Index Fund (VTSMX). Vanguard estimates that over the next 10 years, stocks will return around 4% with 17% volatility. Roughly speaking, expect 70% less gain but 70% more pain. Their bond market projections are 2.5% gain and 5.0% volatility. Over the past five years, Vanguard Total Bond Market Fund (VBMFX) returned 2% with 2.8% volatility so you might expect a small rise in returns and a near doubling of volatility. (Vanguard economic and market outlook for 2018: Rising risks to the status quo, 12/2017). That implies a balanced portfolio will return 3.4% annually, before accounting for the effects of inflation, fees and taxes. 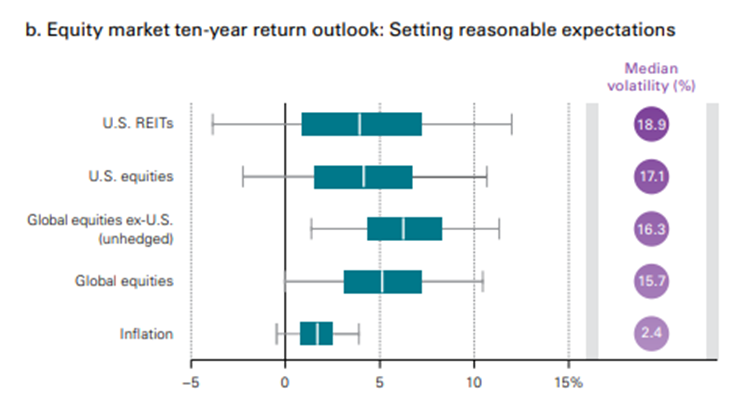 Sadly, Vanguard and BlackRock represent the optimists. Institutional investor Grantham, Mayo, van Otterloo (GMO) uses a simple reversion-to-the-mean method to project negative 4.4% real (that is, after-inflation) returns from US stocks and negative 0.3% real returns from US bonds over the next seven years. In that case, a 60/40 portfolio would lose 2.75% annually (7 Year Asset Class Returns, 5/30/2018). The British institutional investor Schroders, with rather more than a half trillion dollars in global assets, estimates 1.6% returns on US stocks over the next seven years and 0.3% returns on US bonds (Seven year asset class forecast returns, 2017 update). That comes out to 0.75% annually, before fees and taxes. Research Affiliates estimates 0.7% annually for a 60/40 portfolio over the next decade.

So returns for a core 60/40 portfolio in the range of negative 3% to positive 3% per year are plausible, though unpalatable.

Even assuming “normal” markets, long-short strategies are a better option than 60/40 ones. As the folks at 361 Capital note, between 1994 and 2017, “long/short equity strategies have come close to matching the performance of equities with essentially the same level of volatility as a 60/40 bond portfolio, and with smaller drawdown … returns have been comparable to those of long-only equity strategies with half of the risk.”

In short, a skilled long-short manager can offer more upside and less downside than either a pure stock portfolio or a stock/bond hybrid one. That’s reflected in the fact that the Sharpe ratio for the Credit Suisse Long/Short Equity Index is higher than either stocks or 60/40 hybrids, at a time when economic conditions purely favored both.

The argument for LS Opportunity is simpler. For long-short strategies to be incorporated as part of a core portfolio, supplementing or succeeding a 60/40 fund, they need to be simple, reliable and consistently successful. LSOFX is, the vast majority of its competitors are not.

From our perspective, the ideal candidate for a core long/short fund would invest long in great stocks, short the worst stocks, maintain a relatively stable relationship between the size of the long book and short book (the equivalent of the 60/40 balance) and have managers with a record of success across changing markets. Over the 138 funds in Lipper’s long/short peer group, fewer than 20 meet those criteria. For the remainder, some short entire markets via ETFs, some can dramatically change the extent of their shorting, some don’t short at all but simply use options to hedge their long book.

We chose to benchmark LSOFX against only funds that meet our three criteria: a focus on individual stocks, a stable allocation and a team with experience. Using the screening tools at MFO Premium, we compared the performance of those funds over the three years that Prospector has been responsible for LSOFX. We found:

LSOFX had the highest annualized percentage returns 7.2% of any of the funds.

LSOFX had the lowest Ulcer Index, which combines measures of the depth and duration of a fund’s drawdowns; low Ulcer Indexes signal funds with relatively small drawdowns from which they recover relatively quickly.

Prospector Partners, in contrast to many competitors who operate with training wheels, has a long record of long-short investing, having been an actual long short hedge fund for now over 20 years. The firm was founded in 1997 by professionals who had first-rate experience as mutual fund managers. They have a clearly-articulated investment discipline, differing from most in that they work from the bottom up, starting with the balance sheet. Prospector comes at each company from a credit perspective, asking first how much could I lose in this investment. Then they move on to valuing the company through either Private Market Value or  free cash flow (FCF). FCF is like earnings, in that it measures a firm’s economic health. It is unlike earnings in that it’s hard to rig; that is, the “earnings” that go into a stock’s P/E ratio are subject to an awful lot of gaming by management while the simpler free cash flow remains much cleaner. So, start with healthy firms, assess the health of their industries, look for evidence of management that uses capital wisely, then create a relatively concentrated portfolio of 50-70 stocks with the majority of the assets typically in the top 20 names. The fact that they’ve been developing deeper understanding of specific industries for 20 years while many competitors sort of fly-by using quant screens and quick trades, allows Prospector “to capitalize on informational vacuums in Insurance, Consumer, Utilities, and Banks.” They seem to have particular strength in property and casualty insurance, an arena “that’s consistently seen disruption and opportunity over time.”

The short portfolio is a smaller number of weak companies in crumbling industries. The fact that the management team is stable, risk-conscious and deeply invested in the strategy, helps strengthen the argument for their ability to potentially repeat their accomplishments.

The LSOFX portfolio is built to parallel Prospector Partners’ twenty-year-old hedge fund in both the long and short securities.

Even the best long-short funds aren’t magic. They don’t pretend to be market-neutral, so they’ll often decline as the stock market does. And they’re not designed to keep up with a rampaging bull, so they’ll lag when long-only investors are pocketing 20 or 30% a year. And that’s okay. At their best, these are funds designed to mute the market’s gyrations, making them bearable for you. That, in turn, allows you to become a better, more committed long-term investor. The evidence available to us suggests that LSA has found a good partner for you: value-oriented and time-tested. As you imagine a post-60/40 world, this is a group you should learn more about. Investors willing to forego the protection offered by a robust short portfolio in exchange for an expense ratio about 60 bps lower might consider Prospector Partner’s long-only Prospector Opportunity Fund (POPFX).

LS Opportunity Fund. The site remains pretty Spartan, offering the basic information paired with sort of grainy graphics and very little of Prospector’s own “voice.” That said, the Long Short Advisors have been really open and willing to talk; they will, I think, find you the information you need if you just talk with them.