MRFOX seeks capital preservation and long-term growth of principal while targeting a pattern of performance that’s at variance with the market, different from it in as many ways as possible, and adds value on a risk-adjusted basis. The managers’ goal of avoiding the “closet index” trap while laying the groundwork for superior performance means

Marshfield Associates, Inc., a value equity manager, was organized in 1989 to provide investment advisory services for institutional and private investors. It is based in Washington, D.C. and has 19 employees.

Elise Hoffmann and Chris Niemczewski. Ms. Hoffmann joined Marshfield in 1995 and became a principal in 1997. Prior to Marshfield, she worked for Rep. Ed Markey, serving seven years as Counsel to the U.S. House of Representatives’ Committee on Energy & Commerce, Subcommittee on Telecommunications and Finance, where she was responsible for developing securities legislation. Before that, she practiced law at Steptoe & Johnson in Washington, D.C. She has 23 years of investment experience.

Mr. Niemczewski is managing principal and founder of the Adviser. While in graduate school at Columbia, Mr. Niemczewski studied the Graham and Dodd school of security analysis and investing, an approach that has influenced his 41 years in the investment field. From 1981 to 1989, he was President of Justin Asset Management.

Elise Hoffmann and Chris Niemczewski are married to each another.

They continue to monitor carefully their AUM growth rate, its effect on their ability to trade stocks, and will certainly close the fund at some point. With a lot of their own money in the fund, they know that growing the fund indefinitely will inevitably lead to underperformance.

Marshfield doesn’t calculate it; however, they reference 96% vs. SPY at Bloomberg.

Because the managers are sector agnostic, their industry concentration routinely looks very different from the S&P 500 Index. Of the 11 S&P 500 sectors, the fund invests in five, and that’s only if you include the 1% in health care at year end.

The fund is available for purchase through 2 brokerages. It’s available from RBC Wealth Management.

They’ve initiated a process to add another distribution platform by mid-year but don’t look for it at wire houses.

Controlling distribution has allowed them to educate potential investors about their philosophy and discipline, what their pattern of performance looks like as a result, and to limit hot money coming in as it did when their Core Equity SMA decisively outperformed the market during big sell-offs.

The managers make very clear their aversion to following the crowd, closet indexing, and owning popular stocks. They don’t care a fig about what other investors do, what stocks comprise the S&P 500, or what industry or sector a company is in as long as they like it.

That often leads to looking at industries the market hates.

Their goal is to invest in good, resilient companies at bargain prices and to own them until high price or a degradation in quality dictates their sale.

Owning the S&P500 can’t produce a result different from the market in terms of performance or principal preservation, nor does owning every sector.

It’s dangerous to give too much meaning to its movements especially during steep selloffs when emotional investing gathers momentum simply from the decline itself.

So a clear analysis of the greater story — determining those elements of truth which the market might be overly responding to — needs to be examined and understood in proportion to the actual risks that they pose. The goal of these managers is to identify those elements.

It’s hard for a company to get into the Marshfield portfolio.

It must be in an industry that allows it to earn high ROE over time through a differentiated strategy or strong barriers to entry; it must have a functional, resilient corporate culture; and its stock must trade at a price that allows for things to go wrong.

A differentiated strategy means using a company’s competitive advantages independent of what the competition is doing. (That’s not the same as not caring about competition.) They like companies that show a willingness to go against the flow while simultaneously demonstrating a definite awareness of existing or potential threats to their business.

They want to own companies with loyalty to the organization — not to top management –plus integrity, courage, and resolve. Also, there’s no app for old-fashioned human attributes like drive, hard work, and judgment in companies they own.

Buying at a discount allows for making good decisions while under stress. Unless their fundamental investment thesis changes, the managers are eager to invest even during chaotic external events.

Those factors tend to protect capital and lessen risk.

But what does being different from the market actually mean? Will it make you better or not?

They admit that being different means that one may outperform or underperform the market from non-mainstream, anti-crowd, and other decisions they make. It may not add value and even increase risk.

That means being different in ways that are rationally and prudently related to their goals:

As of December 31, 2018, 16.2% of the fund is in cash. Cash hasn’t reduced performance: It’s reduced risk, protected principal, and bought undervalued stocks when the crowd is running for the exits.

These are seriously independent investors. They are …

It sticks to its discipline in any market environment:

This goal won’t change. Process and discipline are why investors invest in the fund with its serious commitment to preserve capital and generate risk-adjusted returns.

The strategy demands patience and a high tolerance for discomfort. It also requires more than just intellectual capability from the managers:

It requires the emotional fortitude to withstand intense pressure to conform.

The six principals who own Marshfield have an average tenure of 23 years and eat their own cooking with meaningful amounts of the managers’ own net worth committed to the fund.

Their holding periods are generally 6-7 years on average and typically have a series of cyclical stories built into the portfolio.

This results in a portfolio likely to be favored in some economic circumstances but not others so that periodic shocks are not equally borne by every holding.

Their independent decisions in theory could result in a portfolio overly bound to a particular economic environment or to the success of a particular industry or sector. In practice, however, that has rarely if ever proved to be the case.

The managers state, “We are skeptical, trained to air potential risks, identify our own biases, and eager to understand the truth, whether that leads to buying a stock or consigning it to the scrapheap.”

All of which has translated to exceptional performance over time. 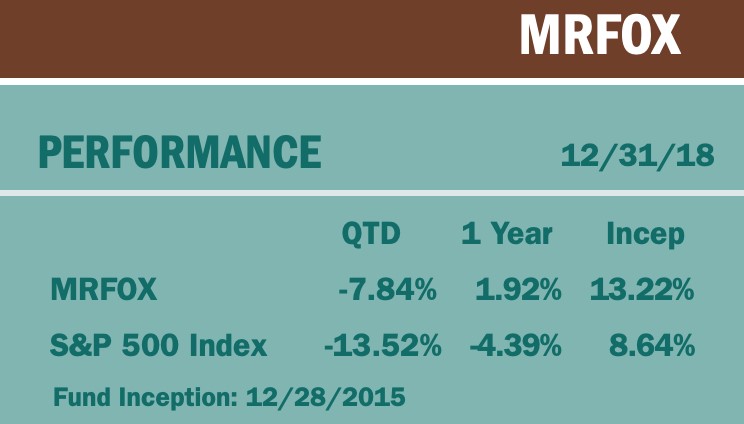 The fund finished 2018 up 1.9%, which places it in the top 15% of its peer group. During the year’s turbulent closing quarter it places in the 1st percentile. Since inception, the fund has earned 13.8% annually while the S&P 500 booked 9.2% and its average Lipper peer returned only 6.8%. To be clear: that’s a two-to-one advantage over the crowd.

Here’s the fund’s lifetime (three-year) metrics from the 31 multi-cap core funds with the highest APR/YR. as of December 31, 2018.

Since inception, the fund has captured 108% of the S&P 500’s upside but only 74.2% of its downside, an entirely admirable asymmetry.

They buy resilient companies run by people who understand that the world is always an unpredictable and dangerous place. That way, when things go wrong, which they inevitably do, they’ll tend to own the survivors, who can often benefit from the chaos.

With applicable, practical, built-in ideas pragmatically woven in its portfolio that provide strength to succeed in favorable markets and limit losses in unfavorable ones, the fund deserves serious consideration from investors

Marshfield asked for its ticker symbol. They liked the imagery of a fox lying in wait and then pouncing on its prey. It symbolizes holding cash and being patient to buy good companies at discounted prices.

(Full Disclosure: MRFOX is in my portfolio. Dennis)