Welcome to the summer of our discontent.

I admit to being a bit distracted this month. My son, Will, was exposed last week to an individual who subsequently tested posted for the coronavirus. Neither she nor he was… uh, optimally cautious during their interaction and she’s subsequently fallen ill. We promptly sought a test from the State of Iowa’s preferred provider, only to learn that they couldn’t see him for four days and weren’t sure how quickly they’d have results. We turned, instead, to our local hospital which administered the test immediately, promising the results “in two to three days.” Four days later, we’ve been told that actually means seven to ten days (or, perhaps, five to seven days) … probably, but really no one has control over the timing and no one knows for sure, though they’ll call us ASAP.

(sigh) Meanwhile, he’s restricted to his bedroom or study for about 23 hours a day while we fret and wait.

A remarkable number of folks have asserted their “right” to undertake behaviors that threaten the health, livelihood, and (potentially) lives of others. There seems relatively little recollection that every assertion of “right” is accompanied by a reciprocal acceptance of “responsibility.” My “right” to health care is married to another’s responsibility to provide it. My right to unfettered political speech comes with a responsibility for speaking in a way that seeks to advance the public good.

I find it curious how rarely people demand their responsibilities these days.

There are 3103 US, global, and international equity funds. Of those, 721 have returns above zero for the first six months of 2020. In some cases, way way way above zero.

As I searched for value-oriented funds in this list, I received a disturbing note from the screener:

While that literally meant that none of the 700 winners had “Value” in its name, it also reflected the wider reality that value investing continues to suffer under the weight of market distortions triggered by what my colleague Charles Boccadoro, among others, refers to as “QE Infinite.” The dogged insistence of the US central banks and Treasury to keep the stock market from collapsing – by supplying hundreds of billions in overnight liquidity when no one else saw fit to put their capital at risk, buying fixed-income ETFs, providing loans in exchange for equity, and maintaining an effectively zero interest rate environment – also keeps the market from clearing away an accumulation of excesses.

Only five of the 721 funds above zero have portfolios that fall anywhere in Morningstar’s “value” style box. They are:

Upright Growth & Income (UPDDX), a tiny and expensive (2.87%) fund having its day in the sun in Year Three of its existence after trailing 100% of its peers in Years One and Two.

EuroPac International Dividend (EPDIX), a tiny fund that uses a top-down strategy to identify the most fundamentally sound markets, then a bottom-up strategy to find high-quality, undervalued stocks within those markets. As with Mr. Iben, the fund’s relative performance is a bit … streaky. 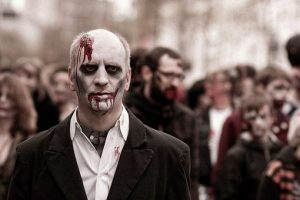 One evidence of the effect of government market intervention policies is the steady increase in the number of zombie companies. It’s a term used by the Leuthold Group to describe “firms that have a five-year cumulative net loss but simply refuse to die.” To be clear, Leuthold is calculating the numbers before the onset of the COVID crisis. By their calculation, “even during the wonderfully strong economic environment of 2018-2019, nearly 40% of small-cap companies posted losses.” The comparable figure for mid-caps is something in the low-30s and, for large caps, upper teens.

The case for quality. As it turns out, due to the negative earnings posted by the cadre of zombies, the market’s valuation metrics are artificially inflated. Because the losses of the zombies negate part of the earnings of the live companies, the market’s price-to-earnings ratio gets inflated.

Scott Opsal, Leuthold’s director of research, calculated the valuations of the overall market then, separately, the valuations of the market’s profitable companies (Small Cap Valuations: Zombies and Ragamuffins, 6/4/2020). If all companies are used in the calculation, the stock market is more expensive than 97-100% of markets in “the modern era,” since 1986. That changes dramatically for mid- and small-cap companies if you strip out the effect of the zombies.

Mr. Opsal actually calculated the earnings yield for each sector, which is the inverse of the sector’s p/e ratio. For the sake of convention, I converted his numbers back to a p/e ratio.

That raises two prospects. First, simply avoiding losers makes an enormous difference in how much you’re paying. Second, the largely unloved small and mid-cap sectors make a lot more sense in terms of valuation than the substantially overpriced (though beloved) large-cap growth universe.

Nassim Taleb, author of the acclaimed Black Swan: The Impact of the Highly Improbable (2010), made a striking claim in the last week of June, 2020:

If you don’t have a tail hedge, I suggest not being in the market [as] we’re facing a huge amount of uncertainty.

“Tail risks” are highly improbable but potentially catastrophe events; getting hit by an asteroid or having a respiratory virus set off a chain of events leading to a 20-year global depression would be examples. Mr. Taleb serves as adviser to Mark Spitznagel’s Universa tail-risk hedge fund which gained 4,000% during the spring panic.

At base, he argues that we are facing so many simultaneous, essentially unprecedented circumstances – a global pandemic, May unemployment rates over 20% in three states, multi-trillion-dollar budget deficits, untried market intervention strategies, erratic political leadership, a quick 40% risk in the stock market – that the prospect of a fairly dramatic negative outcome can’t be dismissed.

Heck: must be anticipated.

I recently moved a chunk of my (all-too-imminent) retirement funds from equity and balanced funds into T. Rowe Price Multi-Strategy Total Return (TMSRX), which we profile this month. Price anticipates making about 4% more than cash, regardless of the direction of the stock and bond markets. The fund is up about 4.5% this year. Fans of absolute value investing might consider Palm Valley Capital (PVCMX) which is up 11% this year and is driven by two remarkably disciplined managers. Folks willing to consider more financial engineering might consider Cambria Tail Risk (TAIL) or Direxion Flight to Quality (FLYT) ETFs, with TAIL up 15% YTD and FLYT up 4%. In both cases, the managers are looking for security blankets for tough times. Ed Studzinski and other senior investors have gone a bit further, arguing that you should be holding an extra-ordinary cash reserve for the year ahead.

None of which is offered to spark anxiety. Instead, we repeat the advice which we’ve been offering throughout the decade: (1) know what risks you’re taking and (2) take no more risk than is essential. You’re far better off leaving money on the table than watching it go up in smoke (or down in flames, metaphors are tricky creatures).

To Chip and The Shadow, for their exceptional work in tracking down the industry news that lies at the heart of “Briefly Noted.” I had 28 pages of their notes and leads to work through this month. Much of that research pointed to a historic purge going on in the industry which over 80 funds and ETFs being killed off, sometimes a half dozen at a time from a single fund family.

To the folks on the MFO Discussion Board, who’ve kept it lively and (all things considered) remarkably civil in trying times.

To our kind contributors: Wilson, the good folks at S&F Investment Advisors, Quang, and Alex. You all make a difference. And to our faithful subscribers, Greg, Doug, David, Brian, Matthew, William, and the other William.

Wishing you all good health, relative sanity and a bit of time in nature,