The S&P 500 just had the best quarter in terms of returns in more than twenty years.

But is it real? Although consumer sentiment is up, unemployment is at levels not seen since the Great Depression. Depending on whether another stimulus/support bill can make it through Congress, many Americans face a cash crunch by the end of July. Every day new bankruptcy filings are announced in those industries most immediately affected by the shutdown and pandemic. This is true even in those states that have been staging in phases their economic re-openings. Business models that worked, especially in the hospitality and restaurant industries, no longer do. Operating at twenty-five or fifty percent of capacity just does not work in restaurants.

Two years back we were looking at overbuilding in the hotel business. With little business travel, rooms are not being rented. Will the financing be in default shortly? The same question can be asked about Class A office space. As one person indicated to me, the most problematic part of returning to work in a city like New York or Chicago is the elevator. A friend in the investment management business in New York said that his firm reopened their office for business on June 23rd, knowing from a survey, that only ten percent of the workforce felt comfortable returning to the downtown office. Cities like Boston, Chicago, New York, and Washington, DC that have underinvested in their mass transit infrastructure find themselves with a working population that thinks that if they return to their urban office locations, they will drive. Surprise – the roads cannot handle the increased traffic. And not all passengers on mass transit seem to think that they need to wear masks, even where it is mandated. 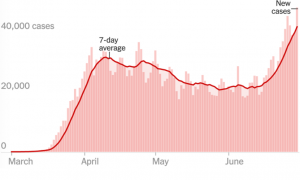 Let me raise the dreaded phrase – “a second wave.” It is hard to have a second wave when we have not had the first wave. That appears to be one of the misconceptions. The purpose of sheltering in place was to give the medical systems in various states the time to prepare in terms of equipment, space, and personnel to deal with a major increase in cases. Somewhere along the line, the message became: when the economies have reopened, the virus has gone away. Wrong. The spread of the virus was suppressed. It is still there and will continue to be there until there is either a truly effective treatment, a vaccine that is at least 50% effective, some degree of herd immunity has built up in the populace, or some combination thereof.

“Chancellor Angela Merkel on March 10 announced that 60% to 70% of Germans should expect to be infected. The idea seems to have permeated her own people’s consciousness that the virus was a fact that must be accepted. Germany has its own vociferous anti-lockdown lobby but tempered by a realistic understanding that the virus is a problem that must be managed. And Germans have been managing well: Their mask-wearing and other daily precautions have kept cases substantially below what their well-equipped hospital system can handle.”
Holman Jenkins. 6/30/20

Expectations were not realistically set, again politicians being politicians. I would point to Angela Merkel of Germany (see Holman Jenkins, “Angela Merkel’s Viral Moment,” Wall Street Journal, 6/30/2020) as the gold standard of the political class – what we should have expected and gotten. On March 10th, Ms. Merkel, trained as a scientist, announced that sixty to seventy percent of Germans should expect to be infected. That statement resonated with Germans. They understood that the virus was real and was going to have to be accepted. They were going to have to learn to deal with it. There was no sugar-coating of expectations. Which led people to understand what needed to be done in terms of testing, facial coverings, and distancing, and resolve to follow through on the same.

But What About My Investments

Once again, we see passive investing and some quantitative methodologies of investing outperforming active managers. Now think about this. If you are an active manager, generally that involves visiting companies, going to trade shows, traveling to see plants, and meeting management, either at their home office or at a conference. It is hard to do that if no one is on the road and no one is seeing people. Video conferencing just does not cut it in that regard.

The problem is exacerbated if you are an international or emerging market manager who does not have offices and staff sited overseas. If your analysts were expected to be overseas fifty percent of the time, and they cannot travel? It should not be a surprise that your returns are going down the sewer and your clients leaving, once they figure out that you are overcharging for what you are delivering. The silver lining here? Analyst days attended by hundreds of people or investment conferences hosted by brokerage firms may be a thing of the past, as no one will want to get their information that way.

Thoughts of a Legend

The other day I decided to look and see if Bob Rodriguez, the now-retired CEO of First Pacific Advisors had given any interviews recently. As I mentioned a few years ago, I had spoken with him in 2009 when he attended the Morningstar Conference in Chicago and later spoke to the Investment Analysts Society of Chicago. Bob had forecast the dot-com debacle and predicted the financial crisis of 2008-2009.

In an interview given to ThinkAdvisor (Bob Rodriguez: Welcome to the ‘End of the Capital Markets as We Know Them’, 3/27/2020), Rodriquez is predicting a small v-shaped recovery, as opposed to a V-Rocket Ship recovery. Among other things, he reasons that share repurchase will be banned for companies that took the financial stimulus money (as we saw last week with the big banks).

He thinks that given the magnitude of the drawdowns that investors saw in their equity investments in the first and second quarters, some as large as 50%, that they will be reluctant to return to the same degree to equities. Increased volatility and the absence of any business continuity and transparency in a multitude of industries adds a level of uncertainty that even professionals are having trouble comprehending.

… that means gold and silver closed-end funds, cash, some short-term bonds, rare commodities, and collectibles and equities only if they were to get crushed again.

Rodriguez’s conclusion – the capital markets as we knew them are gone. The central banks with their zero or negative rates, as well as unlimited quantitative easing, are changing the economic system. Ultimately, he sees monetary inflation coming as the only way out since the central banks will not have the will to eliminate the socialization of risk. That thinking has led him to concentrate his investments in areas with minimal governmental interference. In practical terms that means gold and silver closed-end funds, cash, some short-term bonds, rare commodities, and collectibles such as rare coins. He would consider going back into equities if they were to get crushed again.

While I find it difficult to do some of the things he is doing, especially as I lack the expertise in collectibles, philosophically I agree with much of what he says. And I remember him as someone who always put his investors’ interests above the business interests of his firm, very much a rarity in today’s world. I would also agree that we can expect to see the equity markets in a downdraft again as the paucity of earnings and slowness of recovery becomes apparent, there will be opportunities in unlevered situations with real cash flow. Things to be avoided will be most real estate, and what had been viewed as “hot” collectibles, to wit, the contemporary art market. In many respects contemporary art will be an area for the foreseeable future best thought of as a marketplace of tchotchkes.