Each month we chronicle the funds newly in registration with the SEC. You could think of them as akin to all of the players who declare their eligibility for the NFL draft each year. “Put me in, coach,” they cry. “I’m ready to play!”

Here’s the football math: each year, around 3500 players are eligible for the NFL draft. Two hundred fifty-four will actually get drafted. Of the drafted players and undrafted free agents, about a third make it to a training camp. By the calculations in Pro Football Reference, of those making the final roster, only 20% of those players earn a “good” rating or better as professional players.

Ummm … 7% of hopefuls are drafted, half wash out early, and 80% of the remainder end up as mediocre or worse.

And, somewhere in that marsh, you also find Patrick Mahomes.

Mutual funds, likewise. Lots of people with lots of letters after their names and delusions of adequacy conclude that (a) the world needs an 11,000th mutual fund and (b) they’re just the person to give it to them.

And, sometimes, they’re right. Below we profile all of the funds which appeared one year ago, November 2019, in our Funds in Registration feature. Consider it the league’s rookie class. Academic research tends to support the idea that younger, smaller funds tend to have better than expected performance; that is, better risk-adjusted returns than their peers. While not a rigorous test of that hypothesis, we thought we’d let you see who’s held up during one of the industry’s craziest, if not worst, years.

We’d placed all funds into one of four categories:

Stars: the rookie starters on good teams, with top tier performance and enough money to keep the lights on.

Guys in the trenches: funds that aren’t embarrassing themselves and have enough assets to push through to next season.

The guys on the benches: funds which unsustainably small asset bases and, often, really discouraging performance.

Didn’t even make it on the bus: funds that failed to launch or were liquidated within months of birth.

AdvisorShares DWA FSM US Core ETF (DWUS) uses the FSM Core Solution US Core Model, constructed by Dorsey, Wright, to build a portfolio of ETFs. The fund may move toward cash if the markets turn ugly. The fund has assets of $59 million and top 1% performance, up 25% YTD through 10/23

Aperture Discover Equity Fund (ADSRX) – formerly called Aperture Small Cap Opportunities Fund, takes “long and short positions in equity securities of companies that the Adviser believes are undergoing transformational change.” The focus is on North American small-cap stocks. Its opening expense ratio is 2.45%. Nonetheless, it has gathered $295 million and has results in the top 1% of the small-cap core universe with a gain of 33% YTD.

Franklin Disruptive Commerce ETF (BUYX) has ridden Covid-friendly names like Amazon.com, PayPal, and Shopify to a 69% YTD return. Still, it has drawn only $27 million.

Grandeur Peak US Stalwarts Fund (GUYSX) invests in the sorts of stocks that have graduated from Grandeur Peak’s core micro-to-small cap growth funds. While registered in fall 2019, the fund didn’t launch until March 19, 2020. Which is to say, it launched around the time the bear market crash ended and has posted a 71% gain since then—about $37 million in assets in a strategy designed to accommodate billions. 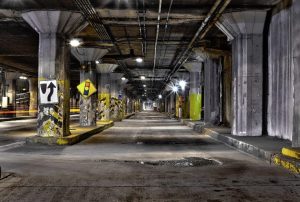 Segall Bryant & Hamill Small Cap Core Fund (SBHCX) is another converted hedge fund, Lower Wacker Small Cap Investment Fund, LLC, (Ummm … Lower Wacker Drive in Chicago is a subterranean stretch that could easily double for the set of a post-apocalyptic zombie flick.) It is crushing its small-cap peers, but that still translates to returns of under 1% YTD. $37 million has found its way to the fund. Morningstar likes it (Bronze Q) though only one of the two managers has invested in it.

Axonic Strategic Income Fund (AXSIX) invests primarily in asset-backed, income-producing securities with the slightly worrisome note that “for speculative or hedging purposes, the Fund may use various cleared and uncleared over-the-counter and exchange-traded derivatives.” Good news: $630 million in assets. Bad news: underwater since launch and slightly behind its multisector bond peers.

Baron FinTech Fund (BFINX) invests in tech-driven financial service companies. $14 million in assets, a Silver Q rating from Morningstar, with returns in the bottom third of their peer group. To be clear: that’s a 23% YTD gain.

Catalyst/Teza Algorithmic Allocation Income Fund (TEZAX) uses futures contracts to gain broad exposure to different asset classes, with the exposure changing daily. They aim at 9-12% volatility and get whatever return that allows. So far, $7.5 million in assets and a 3.5% YTD loss, which is in the middle of its global allocation peer group.

First Trust Vivaldi Merger Arbitrage ETF (MARB) does regular merger arbitrage stuff. $13 million in assets, underwater YTD, and about in the middle of its pack.

FMI International Fund II – Currency Unhedged (FMIFX) uses the same strategy as FMI International (FMIJX, large-cap, value-oriented, quality-oriented, successful) without the currency hedge. $45 million in assets but down 15% YTD, which puts it in the bottom 10% of its peer group. That performance is about comparable to its Gold-rated sibling.

Lebenthal Ultra Short Tax-Free Income Fund (LETAX) buys munis with a maturity of a year or less. (Yawn.) $9 million in assets and a 0.5% YTD return. That’s at the bottom of the short-term muni peer group, which isn’t awful for an ultra-short-term fund.

LHA Market State Alpha Seeker ETF (MSVX) uses the S&P 500 and VIX futures to pursue market-free returns. Since its inception, it has drawn $25 million and is underwater by a couple of percent.

SP Funds Dow Jones Global Sukuk ETF (SPSK) is the equivalent of an investment-grade bond fund for Muslim investors. The fund has returned just under 2%, which puts it at the bottom of its Morningstar world bond peer group. But sukuk are not bonds, which makes the comparison problematic. The fund has drawn about $30 million in assets.

The Guys whose stomachs clench every time coach looks at them – funds that are not financially sustainable, perhaps because their early performance is … painful.

Archer Focus Fund (AFOCX) owns 40 stocks. That’s about all the detail we had. They’ve got. $2 million, bottom 3% of large growth peer group

Archer Multi Cap Fund  (ALSMX) buys stock in about 100 domestic companies that are financially sound and have good prospects for the future. $2.3 million in assets, slightly underwater bottom third of large-cap core group.

Midwood Long/Short Equity Fund (MDWDX) is a former hedge fund that planned to buy small-value and short small-growth. This was probably not the year to do that. The fund appears to be down about 20% YTD while its peers are down 4%. $23 million, including a chunk of the manager’s personal money, found its way in the door.

Q3 All-Weather Sector Rotation Fund (QAWSX) is a fund of funds with the usual plan: use a computer to target which sectors to buy and which to sell, then move to bonds if the equity market is getting too ugly. $4 million worth of investors found that attractive; presumably, they’re a bit concerned about the weather since the fund is down 10% and trails three-quarters of its peers.

Acclivity Broad Equity Multi-Style Fund may not have launched. Can’t find any record unless it was renamed Acclivity Mid-Cap Multi-Style, which launched December 31. If that’s the case, it’s a fund with $124,000 AUM and performance in the bottom third of its peer group.

Alphacentric Energy Income Fund (AEIIX) peaked at $1.2 million before being liquidated in July 2020. The fund was down 18%, which might well be the top 1% of its peer group, given the energy sector’s travails.

Dynamic Global Diversified Fund appears not to have launched.

Trend Aggregation Cannabis ETF did not launch. Good decision! Despite the fact that hundreds of millions in assets have flooded into cannabis ETFs (what were they smoking?), the typical performance chart (The Cannabis ETF THCX in this case) looks a lot like: 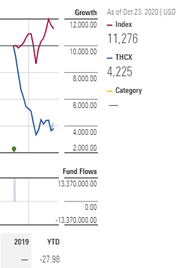 A surprising number of the rookie funds are legitimately top-tier performers. We’d place seven of the 27 funds profiled (25%) as first-tier performers. The other categories’ distribution remains nearly constant: nine palookas, six funds on life support, and five that were DOA.

Some of the short-term successes are attributable to luck: Grandeur Peak launched after the crash, Franklin and S&P 500 Sharia likely benefited from covid-induced shifts. Still, investors looking for a portfolio refresh could do a lot worse than looking at young funds with experienced managers and a good start out the gate!