“What is this optimism?” asked Cacambo.
“Alas!” said Candide, “it is the madness of maintaining that everything is right when it is wrong.”

Suffice it to say that September was not an easy month for equity investors. The equity markets entered the month overextended in terms of valuation metrics. And by the end of the month, we had seen the worst period for underperformance since March of 2020. And that comes as we have increasingly seen not consistency from day to day, but rather greater volatility. 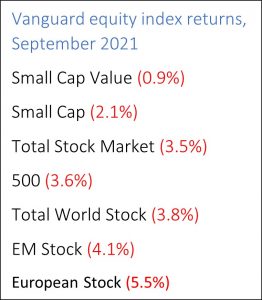 The inflation reading for August came in at a higher level than it has for many years, confirming what the average individual has seen as that person does the grocery shopping, purchases fuel for the car, pays insurance bills, and tries to maintain his home in good repair. Inflation is here, and not at the 2% rate that the Federal Reserve had targeted. And while the political talking heads make obeisance in the direction of a “transitory” period of inflation, the definition of transitory is starting to look as if it might be greater than three years. In that vein, one must wonder if, in their own private conversations and briefings, Speaker Pelosi and Leader Schumer acknowledge to each other that we are on the edge of a period of hyperinflation. Which on the one hand might be viewed as good, since it would inflate away the debt being undertaken to finance a new paradigm. At the same time, hyperinflation would destroy the purchasing power of the earnings and savings of most likely all but the top two percent.

I will simply state that I believe we are on the cusp of a period coming that will be a hyperinflationary period, much as we saw at the end of the 1970s and beginning of the 1980s, all of which led to the election of Ronald Reagan. At this time, the focus of personal investing should be on wealth protection rather than growth. How should assets be allocated then? That is a question that requires an evolving answer, as the usual suspects are either not working, or facing political headwinds that haven’t usually been seen (energy). And we need to add to the mix the fact that supply chain issues are again beginning to bedevil us. For example, Costco is again putting purchasing limits on paper products (toilet paper) and bottled water. And in your regular supermarket forays, you will see more half-filled shelves along with prices on milk, butter, bacon, beef, pork, and chicken that are substantially higher than at the beginning of the year.

One factor contributing to that is the general unavailability of labor to fill open positions. Earlier this week I was speaking with a friend who banks with a $14B in assets bank in eastern Massachusetts. She wanted to go into her local branch to open a savings account for her son as a birthday present. She called her relationship banker, who told her the branch lobby was closed, she had to make an appointment. Which she did, and when they were in the branch, there was one bank account officer and one person on the teller line. When she asked what was going on, she was told that the bank had ninety open positions that it could not fill. I mentioned that story to someone at another bank in a different part of the state, who told me their problem was that the news media have made people so frightened of the Delta variant of the virus, that bank customers are doing most of their banking by phone, online, or by mail (not really by mail, which has its own problems presently). And all of this contributes to the hiccup in achieving a business revival.

What to do? I have never been a fan of investing in commodities (and never made money investing in them). In terms of agriculture, one had to deal with projecting and understanding the issues of weather, pests, plant disease, and the like. The same could be said for the extractive industries such as mining or energy. I still remember sitting at a gold mining conference in the 90’s outside of London where it dawned on me and one of my conference neighbors simultaneously that the problem with the business model was the culture of the management and the engineers. There was always another project to start, which SHOULD be cash flow positive in the future. It is a problem that we saw in the energy industry in this country – there were always more wells to be drilled, and with financing available, one could keep drilling. That said, 2020 was a wake-up call to energy, and the focus shifted to rational capital allocation.

Unfortunately, an energy surplus is now in danger of being something else, which if oil hits $90 a barrel by the end of the year, there will be a major impact on the economy and the way of life for most of America.

Put differently, 73% of the electricity generated in China comes from coal, natural gas, and nuclear. I don’t expect the leadership there to be willing to tell their population to sit in the dark and cold during the coming winter to fight global warming. I do expect to see as much Liquified Natural Gas as possible being shipped out of Texas and Virginia to Asia and Europe so companies in that arena will be minting money for the foreseeable future.

So, back to asset allocation – obviously have enough cash reserves to fund at least two years of living expenses, in insured certificates of deposit. There is a market to be shopped there in smaller banks and credit unions, with nine to twelve month certificate yields running between 35 and 45 basis points. In terms of currencies, if your liabilities are dollar-denominated, your investments also should be. The exception is using international funds that do not hedge back their foreign currency exposure to dollars.

In terms of bonds, favor those with maturities of less than a year, generally using some of the ultra-short bond funds available from Vanguard or Northern Funds. And in terms of equities, this is probably not the time to be making wholesale changes. If you have been comfortable with the funds you have been using in terms of management and holdings, and I mean that in terms of being willing to ride down with them in a drawdown, there is probably no good reason to make a shift now. On the other hand, if we are seeing management and ownership turnover as we have seen at Walthausen, or managements doing something new and out of character, such as going into small-cap investments when they don’t have the talent pool to do quality research in that area, be very careful.

China – I am not going to say much here, since I think the story is too complex to cover in a few sentences. You have people like Ray Dalio at Bridgewater saying it will be a mistake not to be invested in China going forward. You have others like George Soros questioning the wisdom of any investments in China, indeed questioning whether what you own is in effect anything other than a piece of paper. I suspect I would be more comfortable limiting myself to holding investments in Asian countries that have solid trade and economic relationships with China, such as Singapore.

Finally, the next two months will require careful attention to any tax law changes that make it into law, as well as the proposed effective dates. Some of the changes being bandied about could have major impacts in the areas of energy, real estate, master limited partnerships, and family-owned businesses.

And above all, when in doubt, sometimes the best thing to do is – nothing.