Thanks for your patience. The end of July and beginning of August brought a bunch of challenges.

This month’s issue has a lot of interesting content; just not quite so much as we’d planned. With luck, we’ll shift the vast bulk of it to September.

Zoom in to Charles and the MFO Premium walk-through

MFO Premium offers a ridiculous wealth of information for a pittance. I am always in awe of Charles’s energy and his drive to adapt the site to the needs and interests of its readers. This month he’s introducing a new analytic tool, the Ferguson Metrics. They’re a fund evaluation tool used by Brad Ferguson of Halter Ferguson Financial in Indianapolis. Brad reached out to us to discuss adding them to the MFO screener suite; Charles was intrigued and, voila, he adapted the Premium site to accommodate them.

That’s precisely how a lot of capabilities – from correlation matrixes to rolling averages – have come to be included: readers identified a sensible addition and Charles took their suggestions to heart. Thanks to him and you both for your roles in making Premium premium.

For folks interested in learning more about the site and, in particular, learning how to use the tools to their greatest advantage, should plan on joining us for a free, lively, interactive webinar.

Or, here for second session:

Just migrated MFO Premium to DreamHost from SiteGround, which has hosted the site since launch in November 2015. The reason for the change is that Paypal recently started enforcing more up-to-date versions of TLS (Transport Layer Security) than were available on SiteGround’s server, so it stopped handshaking with our subscriber management software, called UserBase. That meant we had to manually approve subscribers after they paid on PayPal.

We apologize for any hassle! That issue should be fixed now.

The site appears fully functional and the transition should be transparent, but if you see anything amiss (for example, missing newer WatchLists), please email ([email protected]) and we will address soonest.

If you’ve signed up for MFO Premium, your site access may have been affected by a danged annoying software glitch. At base, when you choose to make a contribution and gain Premium access, the PayPal software has to pass a thumbs-up to the UserBase software. A recent update to the program has goofed up that link, so new Premium members might not be getting immediate access. We’re working with the programmers behind UserBase to get that straightened out.

If you’ve contributed $100 or more in support of MFO through the MFO Premium signup link, you should get a confirmation email and almost immediate site access. If you’ve contributed (bless you!) and haven’t been able to get in quickly, write Chip or Charles and they’ll manually create an account for you, pronto.

Many apologies for the inconvenience, many thanks for the support.

Thanks so much to Brad from Indiana and William from San Clemente. Your donations help more than you might know. As ever, thanks to our faithful subscribers, Greg and Deb. We appreciate you!

Here are some quick snippets, rather longer than Briefly Noted pieces (Briefly Noted is, by the way, my favorite feature each month; it’s where I hide some of the Easter eggs), but noticeably shorter than stories.

The folks at MFWire ran a couple stories in July based on analyses of fund flow data. “A Value Equity Shop Leads This Pack” (07/09/2018) highlights LSV as the small firm with the greatest inflows. JOHCM and AlphaCentric. Interested parties might check our recent pieces on LSV , JOHCM Global Income Builder and AlphaCentric Income Opportunities.

On the flip side, people (I’m hopeful that it’s “people who don’t read MFO”) yanked a quarter billion out of Seafarer Overseas Growth & Income, as well as smaller but still substantial amounts from Leuthold, Hennessey, Wasatch and Homestead. By and large, those are investors surrendering to the temptation to let short-term performance drive their long-term decisions. Seafarer, for example, returned 26% to its investors last year which put it near the back of the EM pack. I nod: Seafarer’s strength is that it produces strong absolute returns in frothy markets though its relative returns lag because it refuses to toss shareholder money into the froth. In general, when the markets turn down, Seafarer’s caution repays its investors and sets them up for the next upturn. So, 2017, no problem for me. It trailed its peers by about 300 bps in the first four months of the year, at which point two things happened: (1) shareholders fled and (2) the fund began solidly outperforming its peers again.

In general, if your long-term plan hasn’t been revised and your managers continue to maintain their discipline, you’ll find it more profitable to maintain your discipline.

Brad Ferguson wrote to offer his nominee for most ironic mutual fund name ever, Columbia Contrarian Core (LCCAX). The irony is embodied in this list of the fund’s top six holdings: 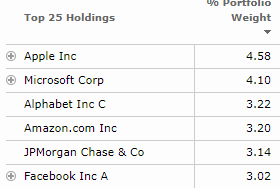 Hmmm … well, they don’t own Netflix. Maybe Columbia Go With The Mo was taken?

LCCAX strikes me as a perfectly fine fund but only modestly “contrarian.” Morningstar shows it has a 95-96% correlation to the S&P 500 depending on which time period you test. MFO Premium shows it with a 98% correlation in the current market cycle with a 99% correlation during the market crisis of 2007-09.

It takes exceptional mental gymnastics to conclude that the U.S. stock market is not broadly and substantially expensive. (Congrats to those who’ve convinced themselves of it; your returns over the past five years have been exceptional!) The evidence presented by the Leuthold Group and others is that overvaluation now is worse than it was before the 2000 crash, because it’s broader now than it was then. Value investors flourished in 2000-01 because the late 1990s bubble led investors to ignore rock-solid companies and their stocks remained undervalued. Leuthold argues that’s no longer the case: the race to the top infected middling companies as well as market darlings. 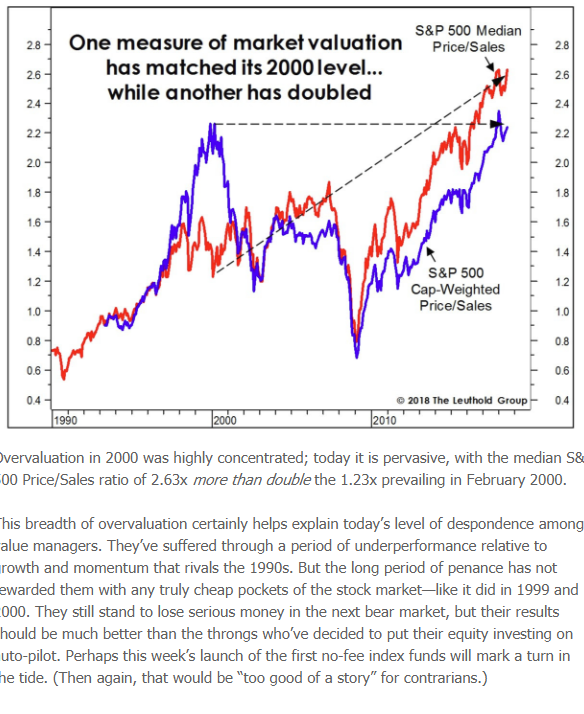 That’s back to a fascinating bit of news. A Marketwatch story quoted the head of Morningstar Europe as saying that, based on valuations alone, the US stock market is poised to return zero for the next decade:

“Our expectation at the moment is that you won’t have any real return from U.S. equities over the next 10 years,” said Dan Kemp, chief investment officer for Europe, the Middle East and Africa, at a company event Wednesday in London. In the chart he shared below, the black line is pretty close to zero for American stocks. (“Brace for a lost decade for U.S. stocks, warn Morningstar strategists,” 07/05/2018)

That forecast is based on a top-down analysis of “the market” rather than an analysis of each individual firm and it assumes that valuations drive returns over the long-term. The accompanying chart is a little less dour than GMO’s monthly projections, but not much: 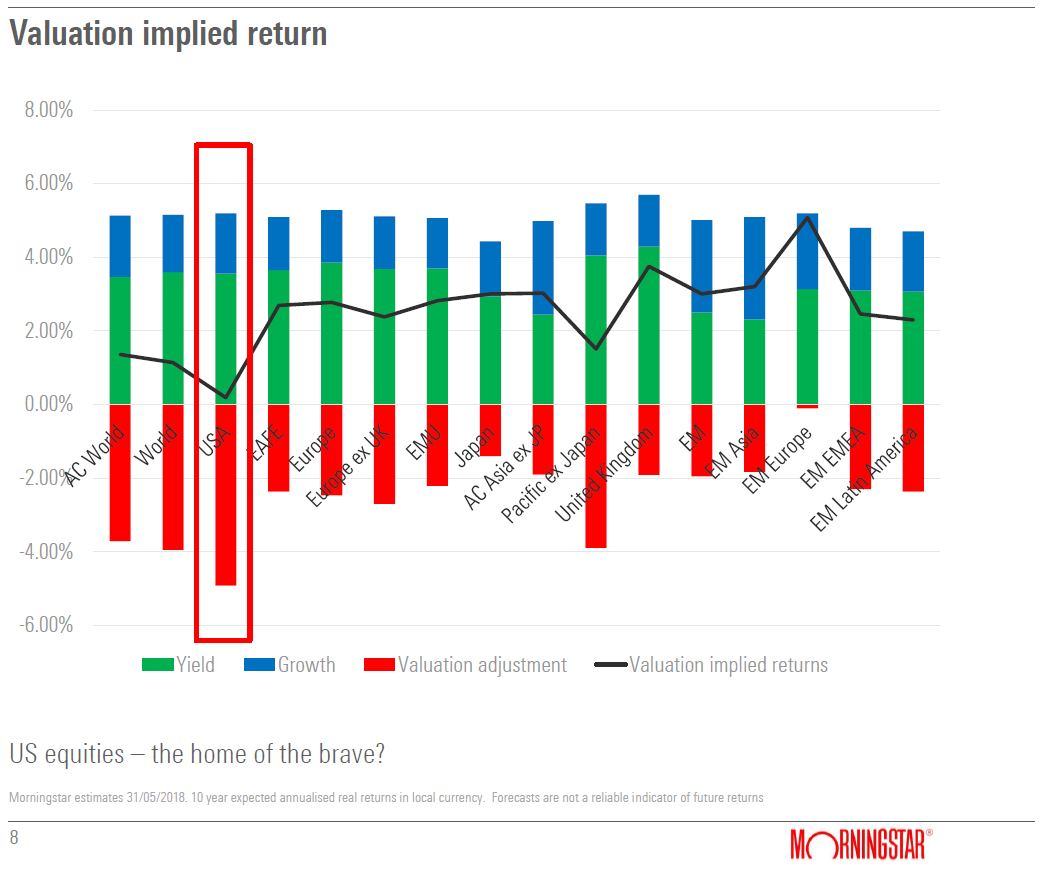 A rough translation is that there’s enough economic value to support market returns – worldwide – of about 5% (that’s the top of the blue line) but investors have so egregiously overpaid for some stocks that their prices will inevitably come back to earth (that’s the bottom of the red line). So if you reduce possible gains to account for overpaying, you end up at the black line. US – zero, emerging Europe – up 5%.

That implies that the US market is the world’s most overpriced. On the same day that the head of Morningstar Europe made that announcement, Morningstar US estimated that the broad US market was undervalued by 2%. I asked the folks at Morningstar about the difference; they reached out to Mr. Kemp on our behalf and he attributed it to “a slightly different valuation methodology” and the difference between top-down and bottom-up valuation calculations.

Because those are dramatically different conclusions, I followed-up by asking for “Any thoughts on how to reconcile the two conflicting messages: the market’s undervalued, we’re fine versus the market’s so overvalued that we’re toast for the next decade?”

The folks at Morningstar haven’t responded yet to that question but they have removed their fair market calculations from the Morningstar.com website:

It’s good to conscientiously test, review and refine your methodologies. I’ll be curious to see whether the new methodology materially changes the old conclusion. More to come!

And then there’s Tamiflu…

A note in closing that, I know, affects very few of you directly. It appears that something like 9% of East Asians have a genetic mutation that causes one of their brain proteins to look a bit like a flu virus. Some researchers believe that Tamiflu mistakes the brains of such folks for the enemy and attacks it. The result can include “side effects, ranging from neuropsychiatric, gastrointestinal, to hyperthermia and skin problems.” In Japan, for instance, there were a disturbing number of suicides – especially among teens – in Tamiflu users which led the government in 2007 to ban use of Tamiflu for children between 10 and 19. That ban is now under review. Folks at the Mayo Clinic agree that the risk is not widely perceived in the US, likely because the average practitioner sees too few teenaged East Asians to recognize a pattern of problems.

If you’re the parent of a child of East Asian ancestry, you might want to talk with your health care provider before agreeing to the drug. For other groups, the consensus seems to be that serious side effects are rare enough that the benefits of Tamiflu might outweigh the risks. I’m not competent to judge those claims.

Will’s off to college, beginning August 29th. Pray for the good folks at the University of St. Thomas and for the unsuspecting citizens of the Twin Cities in general. My child’s about to descend on them.

Wishing you a grand end of summer,