Snow on the pines

Otaka Gengo Tadeo (one of the forty-seven samurai).

So, another month of volatility come and gone. I think back to about this time almost a year ago, when one of my dinner companions at an event in New York was Byron Wien. Byron had just released his famous annual predictions, one of which was that the market would correct towards the fall, but then rally back to a new high by year-end. It will be interesting to see how that plays out, across the capitalizations of equities (micro, small, mid, large, and mega) as well as across other asset classes (bonds, cash, and real estate to name a few). As my former partner Clyde McGregor recently opined to me, there have not been any safe places to hide.

Over the next few weeks, we will be seeing the capital gains and income distributions from many funds, unless like so many precious metals or natural resources funds, they still have large tax-loss carry forwards to offset distributions. Thus, investors holding mutual funds in taxable accounts, rather than in retirement or other tax-exempt situations, will find themselves with a distribution from a fund’s net asset value. They will have to pay taxes on those distributions. And that is on top of showing perhaps a negative ten or fifteen per cent return on the share price of the fund since the first of the year. What to do, what to do? If they are under water with regards to the basis in the fund, they can certainly liquidate the fund to take a loss and offset the distribution gains from the fund. But that only works if they have a basis loss to take. Many, if they have held the funds for some years, will still have a gain on their original investment cost. If they sell the fund for another gain it only exacerbates the problem.

In that vein, as accountants meet with individuals for their year-end tax planning, and to make sure that the client’s estimated tax payments are where they need to be, they will be delivering a lot of bad news. This will be especially true in states with high personal income tax rates and high property tax rates, with those deductions capped at $10,000. Many will find themselves needing to raise cash to pay taxes. Last month I advanced the argument that increasingly I thought mutual funds should be owned only in tax-free accounts. This also ends up being another argument for the tax-efficiency of equity index funds in taxable accounts, since the distributions as a per cent of a fund’s net asset value are generally less than 2%. In many actively-managed balanced and equity funds, the distributions as a per cent of a fund’s net asset value run the gamut from five per cent to as high as eighteen per cent, at least of the funds I have seen. Those numbers will not be insignificant to individual investors.

Two for Me, One for You

Another cultural shock for me that is ongoing is to observe how firms treat not just their investors but their own employees in a year like this one. One surprise, which I think reflects the combination of performance issues and continual fee pressure from passive and exchange-traded products, has been to look at the number of firms, like long-term value firm Chieftain Capital, that are shutting down. Some of that is a function of not being able to sustain a founder’s culture. Some of it is a function of the owners having decided that they have about sucked the golden goose dry, that is, pure greed.

It will be interesting to see how many firms, notwithstanding how poorly their investors have done this year, will pay huge bonuses to the already highly-compensated employees. Some firms historically have been quite willing to eliminate the 401 (k) match for the non-professional staff while still paying the highly-compensated bonuses. This reminds me of a discussion I had recently with a former official in a prior administration about TARP money. That person had indicated that they expected the large banks and financial institutions to do the “right thing” and pump the money into the economy and NOT pay the executives huge bonuses. Instead the financial institutions sat on the money. They started down the path of paying out huge bonuses, until they were told they could not. That caused all kinds of wailing and gnashing of teeth – “we won’t be able to recruit and retain the right kind of people.” It was of course exactly those “right kind of people” that put us into the mess we were in in 2008. And one suspects that it is those same “right kind of people” at the private equity firms, hedge funds, and asset management firms that are again going to drop us into the toilet. But I digress. As you are looking at your year-end investment statements, try and figure out how you will feel if notwithstanding your pain, your fund manager has felt no pain.

THE MOST IMPORTANT THING

I have been a paying subscriber for many years now to Grant’s Interest Rate Observer, especially for its somewhat irreverent and contrarian views. In the November 30th issue, there is a reference to an academic article, that article being one that I suggest all of you should read. The article is entitled “Stock Market Charts You Never Saw” and it is by Edward F. McQuarrie, Professor Emeritus at the Leavey School of Business, Santa Clara University. Most of us, when looking at the long-term results of the asset classes of stocks, bonds, and cash, use as a reference the Ibbotson tables and numbers, which start at the end of 1925 and run up to the present. On that basis, one usually concludes that stocks for the long-run provide superior returns over time, and a 60/40 stock/bond allocation smooths out the peaks and valleys nicely for such things as pension accounts, continuing that allocation through the payout period of the pension. McQuarrie and the current issue of Grant’s raise questions about whether this time, it is different, given the effects of Quantitative Easing and other such niceties. McQuarrie raises the question of whether we are under-rating the risk of equities and not paying enough attention to bonds.

McQuarrie’s point, and why I commend his monograph to you – it all depends on the period you are looking at. Remember also the effects of inflation and stock dividends over time. And the charts he has put together looks at many different periods rather than just starting at the beginning of 1926. I will let you draw your own conclusions, but it is a piece that I strongly suggest should be part of your year-end investment reading and planning. 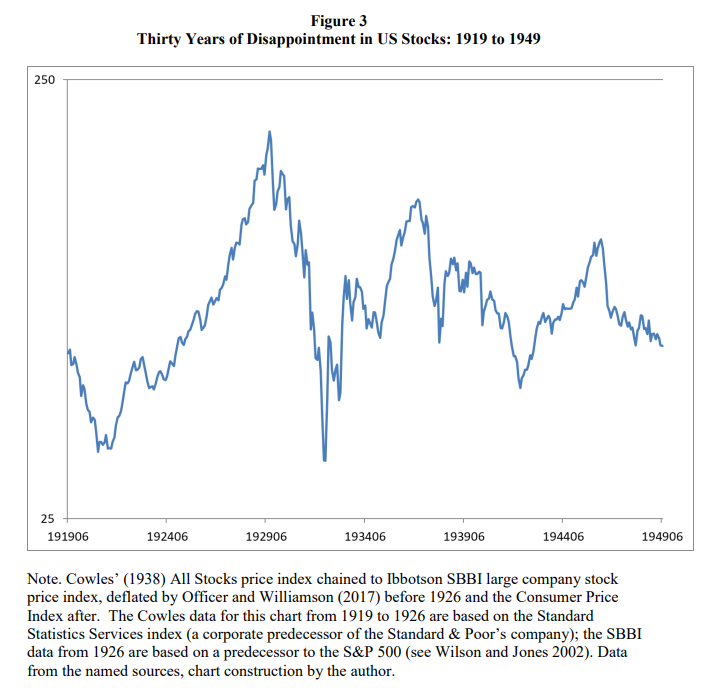