GMO monthly issues their “7‐Year Asset Class Real Return Forecasts” for 10 – and, beginning this month, 11 – asset classes. Their method is fairly simple: assume that things – P/E ratio, profit margin, sales growth and dividend yield – will revert to “normal” over the next 5-7 years and sketch the line from here to there. The “real” part is that you deduct the effect of inflation from the resulting “nominal” returns.

Several scholars have examined their predictive validity and found it to be pretty robust. One, examining projections from 2000-2010 then comparing them with Vanguard index funds concluded:

The correlation between the GMO predicted returns and the Vanguard realized returns for equities, bonds, and all assets taken together are 0.954, 0.959 and 0.677 respectively. (Tower, 2010)

Others found that even when the absolute values are off (i.e., GMO was too pessimistic during the frothier parts of bull markets), the relative values are right: GMO’s top-ranked asset class tends to outperform its second-ranked class, and so on. Ben Inker, their chief strategist, claimed a 94.5% accuracy (2012).

As recently as September, the real return projections were negative for every asset class except cash. They were least negative about the emerging markets. The newest projection, released on November 21, begins to factor-in the effect of the recent market turbulence. 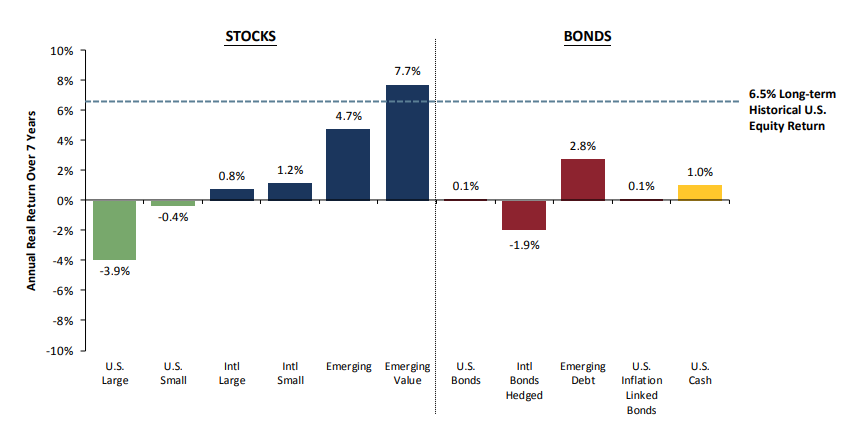 Bad news: cash remains the most promising US asset class, with US equities in the red over the next 5-7 years and US fixed income breaking even.

Good news: there is one asset class now poised for historically exceptional returns, emerging market value equity. GMO projects a 7.7% annualized real return for EM value, well above the historic 6.5% real return in the US stock market. Emerging equity, as a whole, is the second-highest asset class (4.4% real) and emerging debt (2.8%) is third. The one caveat: these asset class return projections are not risk-adjusted; that is, there’s no suggestion about how much volatility you’ll need to accept in return for your hoped-for 7.7% real.

Robert Arnott and the folks at Research Affiliates reach the same, broad conclusion: over the coming decade, emerging markets are priced to offer dramatically higher returns than the US and developed international markets, though at the price of dramatically higher volatility as well. 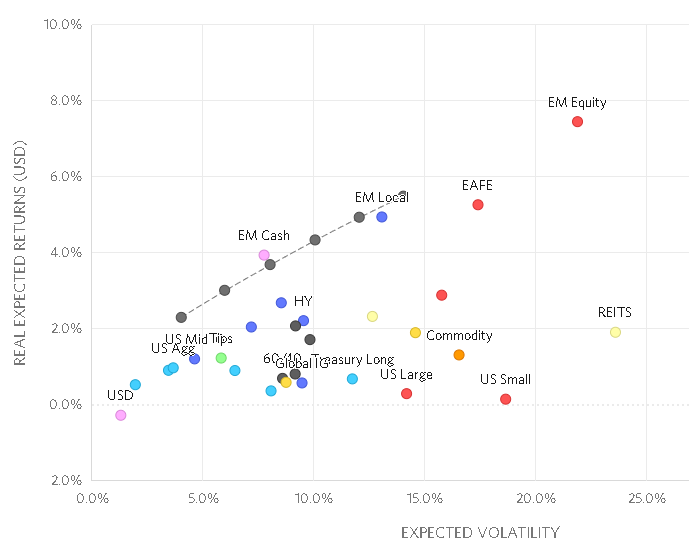 Traditionally value investing in the emerging markets has been painful and, mostly, unprofitable. Folks on MFO’s discussion board shared a thoughtful skepticism about their experience with EM investing and the future of EM value investing.

Nonetheless, managers at Seafarer and elsewhere argue that structural changes in the emerging markets – largely marked by local investor activism – have fundamentally changed that equation and that long-ignored value plays offer … well, exceptional value. Ben Inker, the head of GMO’s asset allocation team, pretty much pounded the table on the subject:

Emerging equities are more volatile than developed market equities. This owes little to the volatility of emerging stock markets in local terms and much more to the strong positive correlation between their local stock markets and movements in their currencies. The spring of 2018 was a classic example of this, with US dollar strength driving significant emerging weakness. Emerging markets do exhibit momentum, so it would not be odd for the weakness to persist for another quarter, although after transaction costs the momentum effect is probably not capturable. Our analysis of the underlying fundamentals for emerging markets, on the other hand, gives us confidence that the assumptions behind our forecasts are sound and emerging value stocks represent the most attractive asset we can find by a large margin, and in the longer term we believe valuation is much more predictive of returns for emerging than momentum is. Our models do not take into account the potential effects of a trade war, but while a trade war is presumably a negative for emerging assets, it should arguably be at least as negative for US assets and seems unlikely to change much about the relative attractiveness of emerging markets in global portfolios.

As a result, there are relatively few EM value funds though their ranks are growing. As a starter set for folks interesting in pulling together a due diligence list, below are the top 10 EM value funds based on 2018 YTD performance. We defined “EM value” as funds falling in Morningstar’s EM category whose equity style box is “value.”

While MSCI publishes the MSCI Emerging Markets Value Index, they report “there are no active ETFs associated with this index.”

Beyond dedicated EM funds, some domestic value investors who have the freedom to invest globally have begun adding EM value stocks to their portfolios. David Hobbs, president of The Cook & Bynum Fund (COBYX) writes that “we are finding the opportunity set outside of the US (and particularly in emerging markets) much more interesting these days.” Their most recent shareholder letter reflects their judgment that the stocks of some good non-US firms are now so beaten down that they have been able to put a meaningful portion of fund’s cash to work this year:

Since their peaks on January 26, 2018 through late October, the MSCI ACWI excluding the U.S. is down 18%, and the MSCI Emerging Markets Index is down 25%…When political and macroeconomic risks in these countries emerge – say the election of a socialist-leaning leader or weakness in the prices of a country’s primary exports – capital will flow out of these markets, oftentimes chaotically. We like and carefully look for indiscriminate selling where speculators dump stakes in good businesses for non-fundamental reasons. Our efforts to buy undervalued businesses are easier when fear pervades, and international markets are increasingly riddled with trepidation. Indeed, we were able to build a position in a new investment and increase the size of our existing holdings in several existing holdings during the last six months.

Bottom line:  the whole EM apple cart might well be upset if the rising conflicts between the US and China are not successfully managed. Speaking to the Bloomberg New Economy Forum, former Treasury Secretary Henry Paulson described that conflict as “a systemic risk of monumental proportions” and warns of “a long winter in US-China relations” (WSJ, 11/8/2018). One EM manager, speaking off the record, worries that conflict between the US and China, stoked by dysfunctional jingoism and risk of escalating reciprocal retaliation, might eventually make the emerging markets uninvestable.

If you believe that both sides will somehow muddle through again, it would be prudent to begin now to deepen your understanding of what appears to be your best hope for reasonable returns in the decade ahead.