It’s been an especially distressing month. Rapid and widespread flooding following a hard winter destroyed the lives and livelihoods of many thousands of good folks in eastern Nebraska and western Iowa. Levees failed, bridges and roads were swept away, homes and equipment left mangled. Many are in despair at the loss of thousands of newborn calves, with loss to private and public property exceeding a billion dollars. At the same time, Cyclone Idai, the second-worst in the region’s history, swept across eastern Africa, likely killing more than a thousand and leaving hundreds of thousands homeless and hungry. While it is only “weather,” persistent patterns in the weather define our climate and the pattern of the past five years has been increasing numbers of extreme weather events.  We really need to work together to figure out how best to manage these challenges.

Speaking of challenges, presidential wannabees are beginning to descend on Iowa. We’ve even got a website to keep track of the invasion. There are days when you can’t get your oil changed without tripping over one of them. Okay, so here’s our little state secret. You know all those pictures where would-be presidents have donned plaid shirts with rolled-up sleeves and are sitting down to some “real Iowa food”? 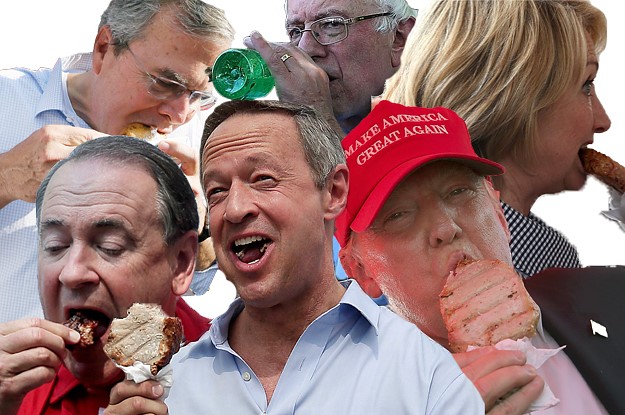 Yeah, actually we don’t eat any of that crap. It started as a sort of party game called “what do you think we can convince those rubes to stuff in their mouths?” which ended up with deep-fried, bacon-studded pork nuggets on a stick and four pound, two foot wide pork tenderloin sandwiches. (Had I mentioned our experiment with deep-fried butter? Took out two Republicans and a Democrat with that one.)

To the folks on the discussion board, who daily share Virtual Excedrin and chuckles.

To the journalists with whom we’ve had increasingly frequent conversations. I’m hopeful they help us all be smarter.

To Marty (We know what you’re looking for. Be patient, the profile is on the way), the good folks at Gardey Financial for their years of support, Richard, Himu from Florida, Peter from Medina, Paul K., James (extra strength Exedrin – Thanks!), and Jonathan.

Thanks, most especially, to the small but growing circle of folks who’ve chosen to make a (generally modest, universally appreciated) monthly contribution in support of MFO. We think of you – Doug, Deborah, Greg, William, Brian, David – as “our subscribers” and are hopeful of sharing a small thank-you later this week. Sadly, I have almost no snail mail addresses so look for a query in your inbox!

David, Charles and Ed will be in Chicago, at or near the Morningstar conference, in the second week of May. Please do drop us a note if you’d like to catch up while we’re there.

Chip and I will be in western Ireland during the first 10 days of June. She’s masterminded a day-by-day itinerary for our time around Dingle, Doolin and Galway. If you’ve got strong opinions about “can’t miss” meals or experiences, let her know and we’ll share pics!

Given our sense that the investment climate feels nearly as parlous as the physical one, we’re hopeful of highlighting more, and more interesting, safe harbor and ESG investment opportunities. If you’ve spotted something that you think we should know more about (that happens a lot), please do pass along your reflections and we’ll see what we can learn.

As the One Minute Manager guy, Kenneth Blanchard, notes and the Make Me Smart podcast guy, Kai Ryssdal, repeats: “none of us is as smart as all of us.”