I teach about propaganda and persuasion for a living. “Propaganda” in the Hitler, Goebbels, rise of the Nazis sense of the term. It’s an important and fascinating study, though it seems reasonably tangential to contemporary investing.

Then I started reading about ETF marketing.

The Institute for Propaganda Analysis, 1937-1942, was an honest attempt to help American citizens detect and dissect trickery and deceptive messages. They were, then as now, rife. The Institute’s most famous publication was The Fine Art of Propaganda (1939) which offered a “candid and impartial study of the devices and apparent objectives of specialists in the distortion of public opinions.” They devoted a chapter to each of seven tricks:

That last one, the bandwagon, “is a means for making us follow the crowd and accept a propagandist’s program as a whole and without examining the evidence for and against it. His theme is: ‘Everybody’s doing it. Why not you?’ His techniques range from the street-corner medicine show to those of the vast pageant” (105).

So here’s the propagandist’s tale: “passively-managed ETFs are taking over the world. The only fools who invest in futile attempts by active managers to beat the market are old men in frock coats and gardenia-scented spinsters!” Those are buttressed by analyses showing the passive strategies will control over half the markets assets by mid-2019.

Excellent question! My skepticism about passive cap-weighted or debt-weighted index investing, especially through ETFs, has had three sources:

Many, including many who market ETFs, disagree.

A series of recent reports suggest that marketers might be consciously gaming the system to generate a self-sustaining bandwagon effect. Take the case of one of the most explosive ETF launches ever … a JPMorgan Japan fund?

The Invesco QQQ Trust (QQQ) was the ETF to capture the largest inflows this week―$1.2 billion―but the week belonged to another fund, the JPMorgan BetaBuilders Japan ETF (BBJP). Inflows for BBJP totaled more than $1 billion during the period, which is remarkable considering the fund had less than $10 million in assets a little over a week ago. (‘BBJP’ 2nd-Fastest ETF To $1B Assets, 28 July 2018)

How can you explain a billion dollars swooping in over the course of a week? A carefully constructed bandwagon and, it seems, just one of many. Asjylyn Loder of The Wall Street Journal reports:

JPMorgan Chase & Co. launched an exchange-traded fund last June that invests in Japanese stocks. The fund raised $1.7 billion in six weeks, making it one of the fastest ETFs ever to surpass $1 billion in assets.

By buying JPMorgan’s ETFs on behalf of customers, JPMorgan’s private bank and wealth management divisions helped the JPMorgan BetaBuilders Japan reach $3.3 billion in assets by the end of the year.

It wasn’t an isolated case. JPMorgan’s ETFs raised $15.6 billion last year, most of it from JPMorgan affiliates … The tide of client money helped boost the New York bank from an ETF also-ran to the 10th largest ETF issuer. By the end of 2018, JPMorgan affiliates owned 53% of the firm’s ETF assets, and the bank was the top shareholder of 23 of its 31 ETFs.

JPMorgan isn’t the only ETF issuer that steers clients into in-house funds. Almost every issuer has repackaged some of their ETFs into other investment products … The practice has even earned its own nickname: BYOA, for “Bring Your Own Assets.” (JPMorgan ETFs Are a Hit, but With Its Own Clients, 11 March 2019 – with thanks to Ms. Loder for her excellent reporting and Ted, the MFO discussion board’s senior member, for urging us to highlight it)

That essentially corroborates the investigative work done by Elizabeth Kashner at ETF.com. In “Tough Times for New ETFs” (2/21/2019), she makes two interesting points: ETF liquidations are rising steadily and almost no new ETF launches lead to sustainable asset levels. In general, the only ETFs make serious money are the ETFs that are used in the portfolios of other funds. Beyond that, for all the hype and pageantry, it looks like the market has peaked.

Bottom line: the argument “but everyone’s doing it!” is the hallmark of the reasoning of a petulant, hormonally-imbalanced teen. That’s not really a good reason to use the same logic to drive your investment decisions, is it? And yet, it works. It worked for demagogues in the 1930s. It works for convincing people to read, usually the first chapter of, mediocre nonsense (a New York Times bestseller!) And it drives marketing money on the web, where popular seven-year-olds can claim a $20 million payday because everybody who’s anybody is watching them.

“ETFs are winning” is not a reason to buy ETFs, especially when “winning” is just a synonym for “attracting money.” The hallmarks of good investments are that they meet your needs, make sense in your world and will serve you in good times and bad. Very few active funds bear those hallmarks, and very few ETFs do. 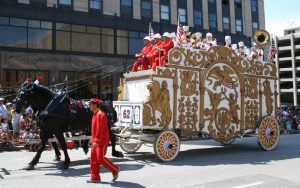 Caution is especially warranted when the bandwagon rolls into town with hype and hoopla and cheering crowds. That’s often a good signal to put your hand securely over your wallet and move quietly toward an exit.

Next month MFO will, by the way, highlight actively-managed ETFs that have the greatest record of strong, consistent achievement. Do drop by.