“Okay … you smoke Hoyo de Monterreys. You’re a scotch man, single malt, not because it’s trendy
but because you’ve been doing it for forty years, and you stay with what works.
You have two great loves in your life, your horses and this company.
You wept openly the day the Dow hit ten thousand …”

MFO first introduced its rating system in the June 2013 commentary. That’s also when the first “Great Owl” designations were assigned to 48 funds. Great Owl (aka GO) funds have consistently delivered top quintile risk adjusted returns (based on Martin Ratio) in their categories for evaluation periods 3 years and longer. The most senior are 20-year GOs. These select funds have received an MFO Rating 5 (top quintile) for evaluation periods of 3, 5, 10, and 20 years.

We’ve had some methodology and database changes since 2013. We now use Lipper categorization versus Morningstar. We now exclude any load in our ratings. And, we now also require lifetime ratings to be 5 for funds less than 20 years old to make the GO designation.

All that said, we’ve promised to check-in periodically on our GOs.

Recently, Jason Zweig published a WSJ piece entitled: What You Gain—And Lose—When You Lock Money Up For The Long Run. And, concurrently, in NYT, Jeff Sommer published: Investors Are Usually Wrong. I’m One of Them.

The amount of conflicting financial advice each of us are bombarded with never ceases to give me pause.

Jason mentions Meb Faber’s refreshing podcasts, which I listen to often. His guests are on opposite sides of the spectrum from month to month, if not week to week.

“How can you not invest in the future of America?,” one guest will ask whole heartedly. While the next will state “US markets are all over-priced by every historical measure.” And, each provides passionate and convincing arguments.

My colleague David Snowball offer’s one way of dealing with the conflict. Basically, nobody wants their funds (or the advice they follow) to suck. Other than that, perhaps it’s all good enough over the long run.

So, David is constantly asking himself: Do the recommendations given, implicitly or not, by us or others, suck?

Some of our readers devotedly follow our Great Owls, so we’re sensitive to how they perform.

Here’s a look back at the past 6 years on those original GOs and I’m happy to report that, with rare exception, they do not suck … just the opposite. (A handful were closed/merged.)

Sorted by risk (or volatility) over past 6 years through June 2019, here’s risk and return performance for the funds in the lowest MFO Risk quintiles … very conservative and conservative: 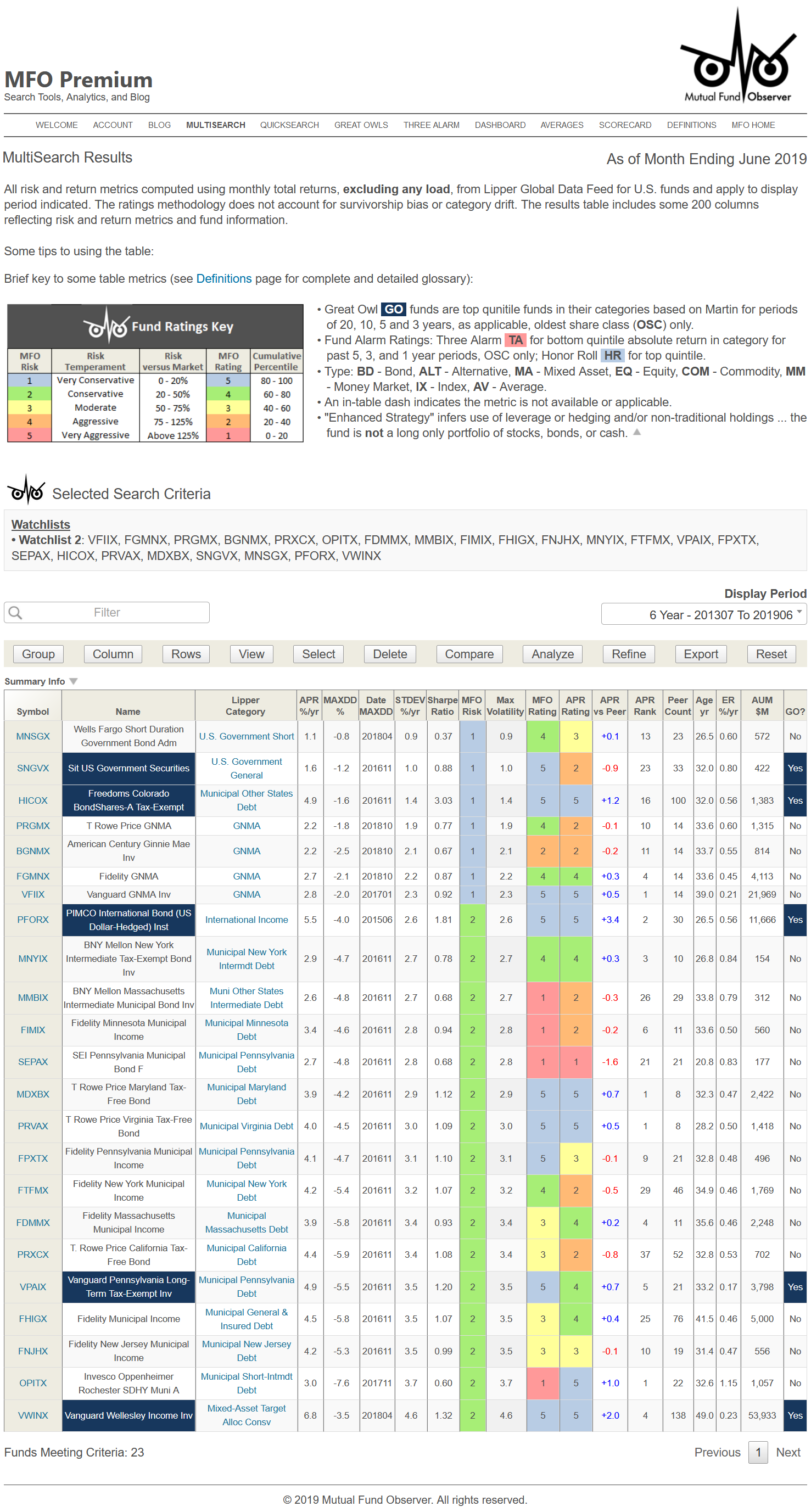 I think Vanguard Wellesley Income (VWINX) must be one of greatest funds of our generation. It’s returned nearly 7% annualized during the past 6 years. (Its lifetime performance is eye-watering.) Who would not take that in this risk category … during a period of a near-zero interest rate Fed policy?

Of the 23 lower-risk original GO funds, only one ended up in the cellar of both absolute and risk adjust returns: SEI Pennsylvania Municipal Bond (SEPAX). (The actual share class in 2013 was SEIPX, since shuttered.)

Granted, only 5 of these funds remain GOs … but that’s not the point.

In nearly every case, investors would have done well to own any of these funds since 2013. 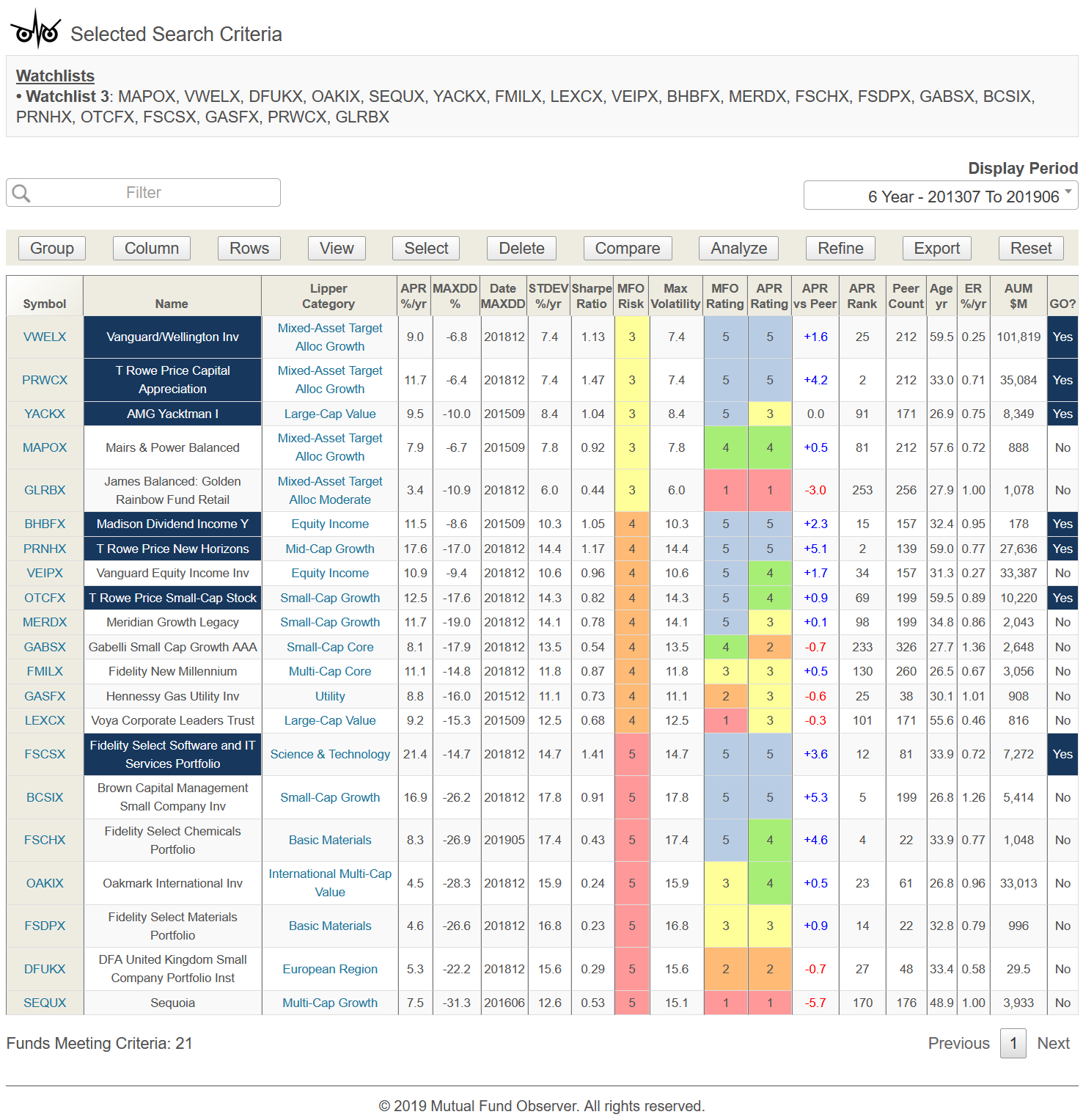 Vanguard Wellington (VWELX), T Rowe Price Capital Allocation (PRWCX), Yacktman (YACKX), and Mairs and Power Balanced (MAPOX) all delivered very strong returns in the six years since being designated 20-year GOs, ranging from 8-12% annualized return in our moderate risk group. It may be easy to say well, of course, ex-post. But not back in 2013.

Of the 21 higher risk GOs, two seriously disappointed: James Balanced Golden Rainbow (GLRBX), which we positively profiled in 2015, and the once-legendary Sequoia (SEQUX). Neither lost money but both well under-performed versus their category peers.

The latter David has reported on here and here  … it basically comes down to the fund’s excessive allocation to Valeant Pharmaceuticals.

The former, well. Perhaps it can be attributed to the passing, sadly, of its quant founder earlier this year Dr. Frank E. James, who was 83 at the time we profiled and no longer actively managed the fund. Perhaps its due to James’ stronger shift to “biblically responsible” investment. But, whatever the culprit, the fund has disappointed. Its strategy historically follows a near 50/50 stock/bond allocation. These past 6 years SP500/USBOND would have earned 8.1% annualized. GLRBX has earned just 3.4%. Bad on us.

Which brings-up a whole other topic of good people managing funds with good strategies (research based, transparent, methodical, low fees), yet somehow delivering subpar performance to investors. How is that possible? Somehow though it is … and, we should better confront it.

In the meantime, it’s encouraging to see how well our MFO Great Owls have performed over time.

Do you know who your Great Owls are? 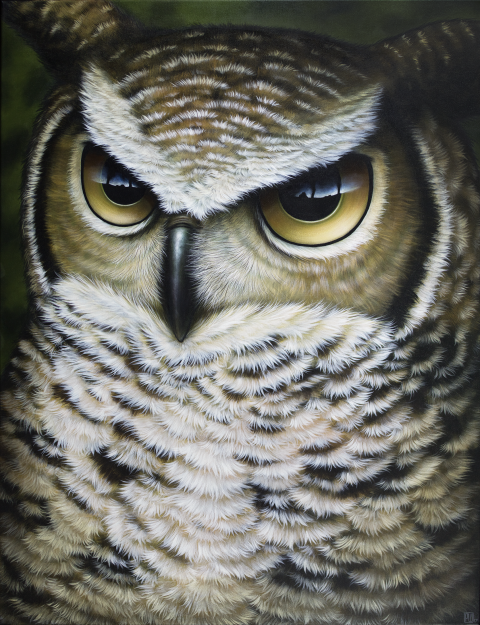