Active management, as a discipline, is hard.

Active management, as a sustainable business, is harder.

Active management, as a sustainable business run by an independent investment boutique, no matter how skilled, is crazy hard, getting crazier and getting harder.

When, on top of all that, it feels like a megalithic corporation has it out for you, you’d surely feel like it’s time to surrender and put Sisyphus on the management team. 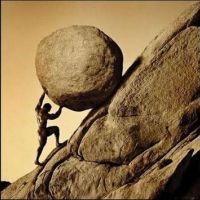 Remember Sisyphus? Woven into the Iliad and the Odyssey but brought to life for many college-educated folks of a certain generation by Albert Camus, The Myth of Sisyphus (1942). King of Corinth. By all accounts, pretty much a bastard. But, also, by all accounts, the smartest and trickiest guy ever. Got a reputation for being able to trick the gods of Olympus. That was jolly in the short term, hellacious in the long term (by which I mean “for all eternity”). Zeus sentenced him to an eternity in Hades, with the sole hope that if he could roll a boulder to the top of a hill, he could get out. Or not: enchanted boulder that always slipped from his grasp a foot from the top and rolled all the way back down.

Steven Vanelli, manager of KL Allocation (GAVIX), suspects that that’s where he’s at.

We profiled his fund in 2014, when it was called GaveKal Knowledge Leaders Fund (GAVAX/GAVIX). We described it as “a very solid, mildly-mannered portfolio” but “not a fund for investors seeking unwaveringly high exposure to the global equities market. Its cautious, nearly absolute-return, approach has led many advisors to slot it in as part of their “nontraditional/liquid alts” allocation.” In March 2015, the fund was renamed GaveKal Knowledge Leaders Allocation Fund, then GaveKal KL Allocation and finally (May 2017) KL Allocation Fund.

On July 30, 2019, he published a short white paper entitled, Are There Inefficiencies in Mutual Fund Ratings?  (2019). The teaser text for the piece was clear:

Morningstar wiped GAVIX’s first five years of history from the star-ratings system and called it a “significant restructure” in 2015. We believe this action may be misleading investors about the fund’s history. Our appeal to correct it was declined. We believe it’s time to provide investors with a fuller performance and asset allocation history.

The short version of the argument is that by calculating only the last 36 months of performance and excluding the 70 months before that, Morningstar creates a short-sighted and unfairly negative capsule of the fund’s performance. 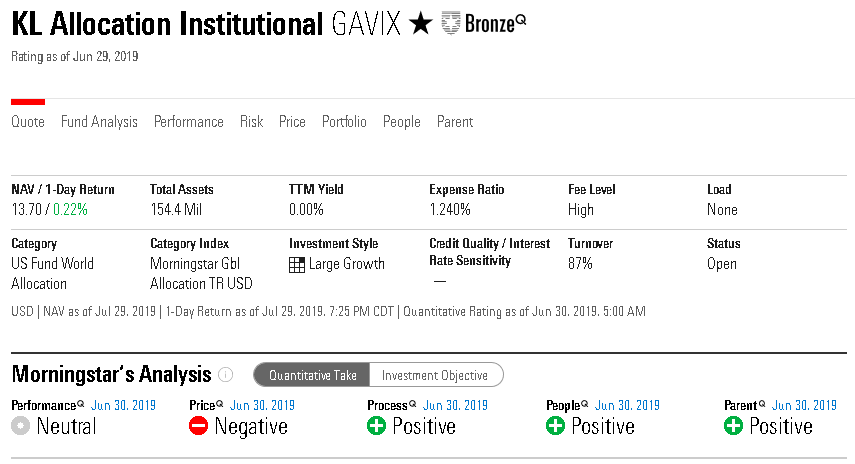 The good news is encapsulated in the designation BronzeQ  where “Bronze” signals “above average prospects” and “Q” means the judgment was made by Morningstar’s artificial intelligence program. Most of the pillars are positive, which helps explain the medal.

The bad news is the one-star rating, which is driven by the fund’s performance since January 2015. 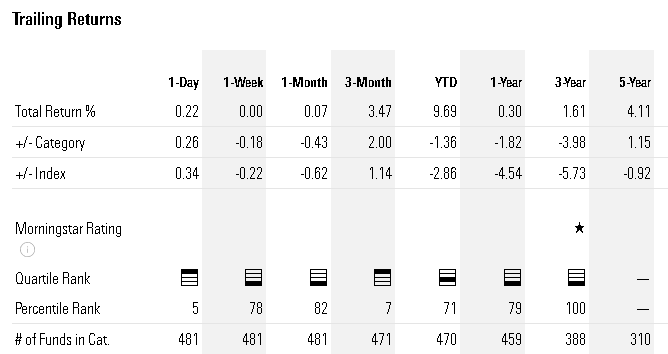 The three-year return is, effectively, dead last in its category but the five-year number is substantially above average. Mr. V. notes:

Using third-party data pulled from Morningstar Direct, of which we are subscribers, Morningstar ranks the fund’s total return in the top 19th percentile of 381 peer funds in the World Allocation Category, as of 6/30/19.

Looking at Morningstar’s report on risk-adjusted total return, the KL Allocation Fund appreciated at a 2.57% annualized rate over the last five years. According to Morningstar, this puts the fund in the top 15th percentile among 381 peers in the Morningstar World Allocation category, as of 6/30/19.

Mr. Vannelli doesn’t dispute the shorter-term stats; he just argues that it’s malpractice to direct investors’ attention to the short term when data for the same strategy for the longer-term is relevant and readily available.

And there’s the rub: is it the same strategy?

On face, the fund documents suggest a substantial repositioning at the start of 2015. Here’s the prospectus language before 2015 and since.

The investment objectives of the GaveKal Knowledge Leaders Fund are to seek long-term growth of capital and to exceed the performance of the MSCI World Index.

Under normal market conditions, the Fund invests primarily in common stock of companies of any size located throughout the world, including the United States. … The Fund also may invest in exchange-traded funds (“ETFs”). ETFs are investment companies that invest in portfolios of securities designed to track particular market segments or indices and whose shares are bought and sold on securities exchanges. The Fund invests primarily in companies included in the MSCI World Index.

The investment objective of the GaveKal Knowledge Leaders Allocation Fund is to seek long-term capital appreciation with an emphasis on capital preservation.

The Fund invests primarily in equity securities, fixed income securities and exchange-traded funds. Using a tactical allocation strategy focused on companies with significant intangible capital, or “Knowledge Leaders,” the Fund’s advisor shifts the Fund’s allocation among asset types, equity sectors and geographies to pursue the Fund’s objective. This flexibility is key to the Fund’s investment strategy. The proportion the Fund invests in each asset type at any given time depends on the Fund advisor’s analysis of market factors, including economic growth, inflation, credit spreads and relative valuations.

The folks at Morningstar, understandably, read those as fundamental changes in strategy:

During our investigation of the strategy change, we reviewed the fund literature. The name change accompanied with the investment strategy language in the prospectus led us to assign a significant restructure tag upon the change to prospectus. This decision was reviewed by senior members of both our methodology and manager research teams.

Mr. Vannelli argues that the 2015 language did not reflect a change in investment behavior, it simply clarified what the fund had been doing all along.

The team did not make an “abrupt” portfolio shift, in our opinion. We did not sell most of the fund’s holdings or have any new holdings that were of “substantially different character than the old holdings.” There was no change in the fund’s legal structure. In short, there was no significant restructuring event in our view, as the holdings breakdown below shows. Furthermore, portfolio holdings suggest the fund has been an allocation fund from its inception.  (emphasis in the original)

He offers this snapshot of the portfolio’s asset allocation before and after the prospectus change:

He laments “questionable and arbitrary categorizations, measurements and data methodologies from the largest provider of mutual fund data for investors.” Morningstar argues that they’re doing their honest best:

Successful appeals are not uncommon; the recent average of successful appeals is approximately 70%. Successful appeals are of a mixed variety; common themes are: the appeal notifies Morningstar of strategy investment changes, which Morningstar substantiates generally through two portfolio disclosures; the appeal elucidates a strategy that may not be born out adequately by Morningstar’s holdings-based statistical calculation (particularly for alternative strategies); and funds that share attributes with multiple categories and request a review to see which is their best peer-group.

GAVIX’s current one-star rating is driven by two factors: (1) it’s based on only three years’ worth of data and (2) one of those three years – 2018 – was the worst in the fund’s history. Long-term investors, as is their wont, reacted to short-term adversity by fleeing.

In both the short and long term, the fund has stayed true to its concern for capital preservation. Because the fund screener at MFO Premium is far more flexible than what’s usually available to individual investors, we were able to generate the relevant performance of GAVIX against its Lipper “flexible portfolio” peers for nine different time windows. We’ve shaded a cell green whenever GAVIX outperformed its peers and red (well, pink) whenever it underperformed them.

In most trailing periods, GAVIX had a lower volatility portfolio than its peers; even when it had above-average volatility, the difference was minor. The key driver is falling returns: the portfolio is now just  10% US equities and 28% international equities, roughly half its historic weighting. With the US equity market up 21% YTD (through 7/29/2019), against international equities up 13% and bonds up 6%, the fund’s 10% gain is reasonable, understandable … any still behind 70% of its Morningstar peers.

Should you look beyond the one-star rating? Hell, yeah. Even Morningstar, with its forward-looking Bronze designation, does. The “flexible portfolio” or “world allocation” business is harder than most, because you’ve got to both get your asset allocation right and get security selection right, and then survive being benchmarked against a bunch of funds that have nothing in common except for a refusal to color within the lines. That requires substantially more research and better understanding of what the manager is doing – and why – than a simple star or pile of stars can capture.

If you’re going to go there, read carefully and focus on whether the manager is doing what you hired them to do, not on an external snapshot.