on September 20, 2019, they announced the closing of BBH Core Select (BBTEX) to new investors

BBH Core Select was a superstar fund from 2005-12, and assets poured in. Over those years, it grew 20-fold in size to $6 billion. 2017 is the fund’s first above-average year since then and money has been rushing out the door: it appears to have had net inflows in one month between 2013-2018 and the incessant outflows have forced the managers to liquidate a portfolio with lots of embedded capital gains, which is causing more flight and is deterring new investments. Closing BBTEX at the same moment you open BBLIX effectively flips on a neon sign that reads “BBH Core Select without the tax risk: enter here!”

BBH Select Series-Large Cap Fund (BBLRX / BBLIX) is a clone of Core Select The prospectus is pretty explicit about the connection, as when it discusses “the performance of a composite of accounts managed by BBH&Co. that have investment objectives, policies and strategies substantially similar to those of the Fund (i.e., BBH&Co.’s Core Select Strategy).” The new fund’s expense ratios are 0.80% and 1.05% for Institutional and Retail, respectively, and the minimum initial investments are $10,000 and $5,000.

Three consequences of the change:

We called BBH after the liquidation of BBTEX was announced, asking for comment on why they’d chosen to liquidate the fund. The phone representative was unable to address the question and promised to forward it to people who could. As of our publication deadline, we haven’t heard back.

The prospectus for the US Vegan Climate ETF (VEGN) is now available for interested parties. It aspires to track the Beyond Investing US Vegan Climate Index which seeks to address the concerns of vegans, animal lovers, and environmentalists. Ummm… why exclude tobacco and guns? There are certainly perfectly fine reasons for doing so, but neither seems much implicated in either of the fund’s titular concerns.

Thanks to The Shadow and the folks on MFO’s discussion board; the former for catching a bunch of interesting developments that were otherwise under the radar and the latter for helping to think through their significance. I enjoyed reading their discussions.

Effective December 2, 2019, purchases of Class A shares of PIMCO Short Asset Investment Fund (PAIAX) will no longer be subject to an initial sales charge or contingent deferred sales charge. This is a development worth noticing. When you see “cash” listed in the portfolio of one of the PIMCO funds, they don’t mean that the money is in a mayonnaise jar on Funk and Wagnall’s back porch. They mean it’s been invested, primarily, in commercial paper which is designed to be highly liquid with returns a bit greater than the rate of inflation. PAIAX is a mutual fund that gives retail investors access to that same conservative, strategic cash portfolio. Our profile of the fund, from 2013, concluded,

This fund will not make you rich but it may be integral to a strategy that does. Your success, like the ants, may be driven by two different strategies: never leaving a crumb behind and being ready to hop on the occasional compelling opportunity. PAIAX has a role to play in both. It does give you a strong prospect of picking up every little crumb every day, leaving you with the more of the resources you’ll need to exploit the occasional compelling opportunity.

Prospector Capital Appreciation (PCAFX) and Prospector Opportunity (POPFX) have both announced e.r. reductions of 5 bps. In the case of tiny but excellent funds, that’s sort of icing on the cake.

Effective September 13, 2019, Scharf Investments, will be reducing the Fund’s minimum initial investment for the Institutional of the Scharf Fund (LOGIX) from $5 million to $1 million.

Effective at the close of business on November 8, 2019, Cohen & Steers Real Estate Securities Fund (CSIEX) will be closed to new investors.

Effective September 10, 2019, James Alpha MLP Portfolio (JAMLX) closed to both new and existing shareholders. With $7 million in assets and a one-star rating, one imagines this is prelude to liquidation.

On or about November 1, 2019 Catalyst IPOX Allocation Fund (OIPAX) will become the Catalyst Enhanced Core Fund. When that happens, the mandate to focus on IPOs will be eliminated and expenses will drop substantially.

Sometime before year’s end (they’re not yet able to commit to a date) Cambria Core Equity ETF (CCOR) and its manager leave Cambria to become the Core Alternative ETF. They expect the e.r. to tick down, but everything else remains the same. It’s an options-based fund that’s had one relatively good year (top 3%) and one relatively bad one (bottom 10%), both with positive returns in the low single digits. The equation Core Equity = Core Alternative strikes me as odd since it suggests very different visions of the fund’s role and nature.

Effective on or about October 14, 2019, the First Western Funds become the Oakhurst Funds. In particular,

Steben Alternative Investment Funds, advisor to the Steben Managed Futures Fund (SKLAX) is being bought by Octavus Group, LLC, advisor to the LoCorr Funds. One senses a name change on the horizon. The fund isn’t as bad as it, at first glance, looks. It missed a massive move by its benchmark index that occurred during the fund’s first 11 months of operation, but it’s been solid since.

As of September 24, 2019, Wasatch Advisors has rebranded as Wasatch Global Investors. Wasatch’s president Eric Bergeson argues that “Global” better reflects “our global business” and the fact that almost half of their assets are in global and international strategies. Skeptics on the MFO discussion board promptly identified the change as a marketing strategy. Given five years of steady outflows, enhanced marketing is surely warranted. 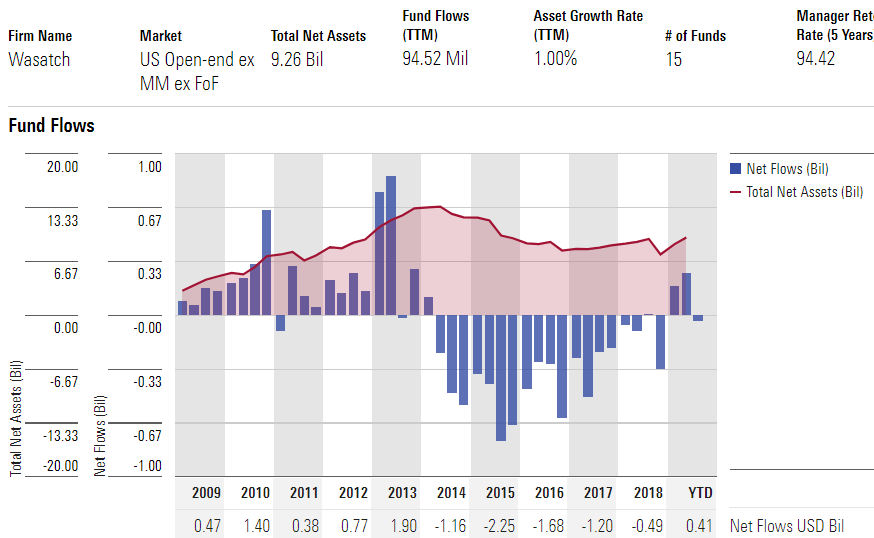 One speculation was that the firm might be marketing itself, potentially to a European acquirer.

Less low: On or around November 1, 2019 Westwood Low Volatility Equity Fund (WLVIX) becomes Westwood Total Return Fund. As now, it will seek total return but it will no longer promise “a lower level of volatility than traditional equity-oriented strategies over a market cycle” and it will no longer constrain itself to be 80% invested in equities.

AdvisorShares New Tech and Media ETF (FNG) will be liquidated on October 11, 2019. The fund managed to lose 27% last year and 34% so far this year, turning a $10,000 initial investment into $5,123 … and, I guess, a nice tax deduction? I’m guessing that the fund’s ticker is a nod to its initial enthusiasm for FAANG stocks.

Alambic Mid Cap Plus Fund (ALMGX) and Alambic Small Cap Plus Fund (ALGSX) closed to new investments on September 23, 2910 and will discontinue their operations effective October 28, 2019. The funds have $4 million between them; to their credit, much of it is their managers’ money. Small Cap started strong, then tailed off. Mid Cap never had noticeable traction in either performance or marketing.

The Board of Trustees of American Beacon Funds has approved a plan to liquidate and terminate the American Beacon Ionic Strategic Arbitrage Fund (IONAX) on or about October 15, 2019.

American Century Adaptive Equity (AMVIX) failed to adapt. It remains open to new investments until November 11 but will liquidate one month later.

The Chadwick & D’Amato Fund (CDFFX) will cease operations on October 28, 2019. It’s a $33 million tactical allocation fund whose tactics have earned it about 3% a year over the past decade.

In cleaning up after their acquisition of the Oppenheimer funds, Invesco has announced a long series of liquidations:

Folks following Invesco/Oppenheimer might want to review an extended and thoughtful discussion of the merger on MFO’s discussion board.

James Alpha MLP Portfolio (JAMLX) has closed to new investors. That announcement said nothing to imply the fund’s imminent demise but a $7 million asset base and one-star rating implies a short stay in hospice.

JOHCM US Small Mid Cap Equity Fund (JODIX) will liquidate on October 11, 2019. Tiny fund with tepid results. It was managed by a London-based team who’d moved from Fidelity’s quant division, Pyramis, to J O Hambro to manage the strategy.

JPMorgan Emerging Economies Fund (JEEAX) undergoes liquidation and dissolution on or about October 24, 2019

None of Lazard Emerging Markets Income (LEIOX), Lazard Explorer Total Return (LETOX) and Lazard US Realty Equity (LEROX) will survive Halloween, 2019. It’s in the best interest of their shareholders, we’re told, that they go. It’s easy to make that case for the first two (small and stumbling) funds, harder with the four-star, Bronze-rated Realty Equity fund. The fund, in both good years and bad, leaked assets.

The $7 million Mount Lucas U.S. Focused Equity Fund (BMLEX) will cease its business, liquidate its assets and distribute its liquidation proceeds on or about October 25, 2019. It’s not a bad little fund, but it appears that a major investor left in late 2016, taking two-thirds of the fund’s assets when it left. They haven’t been able to gain market traction since.

Segall Bryant & Hamill Smid Cap Value Dividend Fund (WTSDX) will be liquidated on or about October 29, 2019. The good news was that flows were pretty stable, the bad news was that the fund still had under a million in assets.

Trillium All Cap Fund was authorized in 2015 but never launched. The advisor has determined that the shares will never be offered. I keep rooting for Trillium: a rare women-owned advisor, experienced managers, ESG focus, $500 million in assets, one pretty solid fund and one pretty weak one.

Early this year, the NYSE gave USCF Summerhaven SHPEN Index Fund (BUYN) six months to find at least 50 shareholders or face delisting. They haven’t managed that yet, but have been given an additional three months before facing the prospect of delisting. Losing money in each of its two years of existence, and losing money this year while its peers are nearing double-digit gains, has made that task difficult.

VanEck Vectors High Income Infrastructure MLP ETF (YMLI) is winding down, a process which is expected to be complete on or about October 25, 2019.