Net equity exposure (percentage long minus percentage short) averaged 24% since inception (June 19, 2017) through August 2019. Among the tools available for hedging its equity exposure are investments in high-yield bonds and options.

Invenomic Capital Management, LP. Invenomic was founded in 2015 to provide investment management services to institutional clients and high net worth individuals worldwide. The firm has five investment professionals and about $226 million in assets, as of August 2019. They offer their services through a ’40 Act fund and a private partnership; driven by external demand, within four to six months, the strategy should be available globally through a UCITS.

Originally, Invenomic served as the fund’s sub-advisor. In the spring of 2019, the fund’s original advisor, Balter Liquid Alternatives, made a strategic change-of-direction which led the fund to become an independent offering. In a considerable vote of confidence, “virtually everyone who touched the product at Balter” (Mr. Motamed’s estimation) has chosen to join Invenomic Capital: former Balter CEO Brad Balter, former Balter COO Jay Warner, former Balter CIO Ben Deschaine, and former Balter CCO Rebecca Gompper among them. From the potential investor’s perspective, that’s relevant because it means this is a small shop with an exceptionally strong team even beyond the investment side of the operation.

Ali Motamed and Ben Deschaine. Before launching Invenomic Capital, Mr. Motamed was a Senior Analyst and a Portfolio Manager with Robeco Investment Management for over 12 years (Portfolio Manager from July 2013 – October 2015) where he co-managed Boston Partners Long/Short Equity Fund (BPLEX) and a related strategy. He was awarded Portfolio Manager of the Year in the Alternatives Category by Morningstar in 2014.

Mr. Deschaine joined Invenomic when the group split with their former partner, Balter. Mr. Deschaine was Balter’s CIO and now serves as Invenomic’s president. While Mr. Motamed is responsible for the fund’s day-to-day construction, Mr. Deschaine is not only responsible for all of Invenomic’s non-investment business activities, but also helps to track and assess factor-based risks to the portfolio.  “It’s a funny world,” Mr. Motamed notes, “where investing has become so factorized that factor volatility exceeds market volatility; need to understand those masked sources of risk.” Before Balter, he worked with Sabertooth Capital Management and Federal Street.

Messrs. Motamed and Deschaine are assisted on the investment side by three analysts, Paul Goncalves Jr., Nate Victor, and Brendan Triano. Mr. Motamed was looking for bright and ambitious younger colleagues and screened, in particular, for analysts who had voluntarily pursued the rigorous, multi-year process of becoming a CFA charterholder or had backgrounds in computer science. He found that in Mr. Goncalves, who has experience analyzing cyclical businesses, Mr. Victor whose specialty is in tech and Mr. Triano whose special strengths are in computer science.

The strategy capacity across all vehicles is about $3 billion.

Mr. Motamed has invested more than $1 million in his fund. Mr. Deschaine has “a substantial investment,” but a more precise range won’t be available until after the publication of the fund’s new Statement of Additional Information.

$5,000 (BIVRX), $50,000 (BIVIX) and $50 million (BIVSX). The Super Institutional BIVSX share class will probably be capped at three or four investors; currently there is one investor in the share class.

This is an update of our May, 2019 profile. This is a good fund that had a bad summer. While the summer months have seen two major developments surrounding the fund, neither of those developments changes our bottom line:

Invenomic has had an exceedingly promising start … Their approach is distinct, their strategy is disciplined, and their manager is well-tested. On whole, investors anxious about both preserving capital and generating positive returns in turbulent markets should consider putting Invenomic high on their due-diligence list.

Development #1: Balter is out of the picture.

As we noted, briefly, in June:

The Balter Invenomic Fund (BIVIX) is in the process of shedding Balter. As a practical matter, that will translate to a name change, Invenomic Fund, and little more. The proxy document offers this somewhat cryptic explanation for the change:

BLA (i.e., Balter Liquid Alts) informed the Board that it was making this request because it is currently exiting the investment advisory business due to uncertainty involving a “seed investor” which could potentially affect its ability to provide services to the Fund and other funds in the future. BLA believes that this transition is in the best interest of the Fund and its shareholders as it will provide continuity for the Fund and create a more direct relationship between shareholders and Invenomic. The seed investor currently holds a non-voting equity interest in BLA and initially contributed seed capital for the Fund.

On whole, the development appears to be amicable and driven by Balter’s business needs rather than any tension between Balter and Invenomic.

For Invenomic investors, this might be a blessing in disguise. Many of the Balter investment-support professionals chose to accept positions with Invenomic. That represents a substantial inflow of talent, much of which once divided its attention between a host of Balter funds and which now will focus their energy exclusively on Invenomic. That also allows Mr. Motamed to maintain his focus on the portfolio. In a September 2019 conversation, Mr. Motamed noted, with an almost gleeful note in his voice, “I have never felt better. I feel so calm. I understand exactly what’s going on because I have no one else in my way, I don’t have to spend time justifying things to a corporate parent.”

Fund flows have been consistently and, in some cases, dramatically positive. The prospect that a European investment house will commit large amounts to an upcoming UCITS version of the portfolio, while not guaranteed, is surely helpful.

As additional depth and redundancy, Invenomic has hired Blue River Partners out of Dallas to come in monthly to go over operations with a fine-tune comb, which helps with back-up and business continuity protection.

Really bad. The fund dropped 3.4%, which had it trailing 99% of its peers. The manager described it as “the worst stretch” in memory. Mr. Motamed and I spoke for about a half hour in early September. His explanation for the summer swoon is that his long book is value-oriented and does not favor high-momentum stocks.

This was arguably the most historic momentum run in a four-month period, ever. It was driven by a flight to quality over the summer: everyone fled everything that had the slightest question. It was a market positioned for maximum insanity.

On the long side, that crazy flight has fed us opportunities. We are finding companies with no trade war risk, companies whose free-cash flow yields are in the mid-teens. It was a chance to buy incredible opportunities at insane valuations.

Frankly, I think our long book is amazing. The headwinds abated when narrative on tariffs abated: every tweet used to be about ratcheting-up the trade war, now every tweet is an opportunity to ratchet-down the dynamic. We were buying stocks that were priced for the worst-case; we can make a lot of profit on them if the news going forward is just “bad” rather than “awful.” For example, we were up 220 bps one day this week with no market exposure and no major news.

In support of his “most historic run” claim, Invenomic shared Bloomberg data on the divergence between high beta momentum and low beta momentum stocks, as measured by the Goldman Sachs High Beta Momentum Index (GSPRHIMO). GSPRHIMO is a pair trade that represents going long US High Beta Momentum Winners and short US High Beta Momentum Losers – essentially long the stocks up the most and short the stocks down the most recently. GSPRHIMO had its strongest 90 day return (56.1%) since inception from mid-April to late August. The chart below displays rolling 90 day returns of the index from GSPRHIMO inception (May 29, 2009) through August 2019. 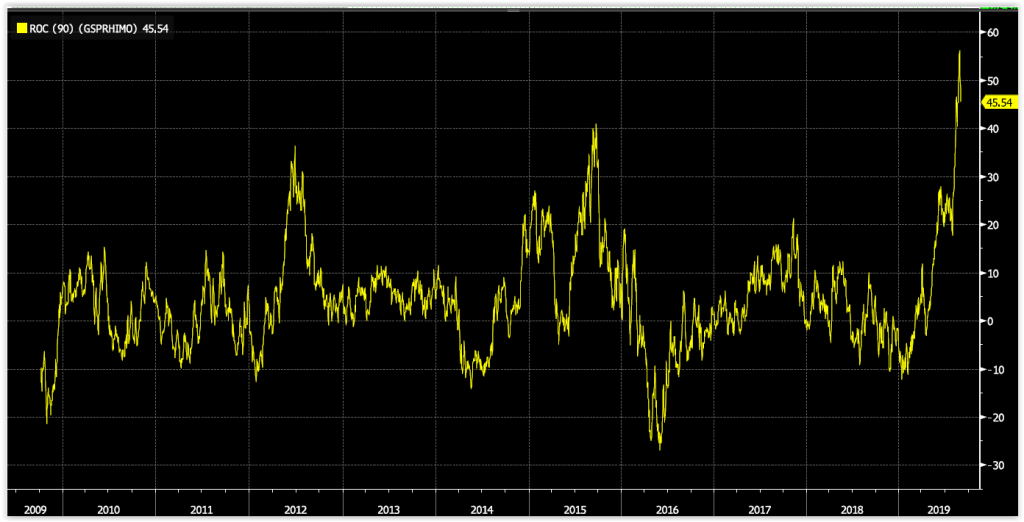 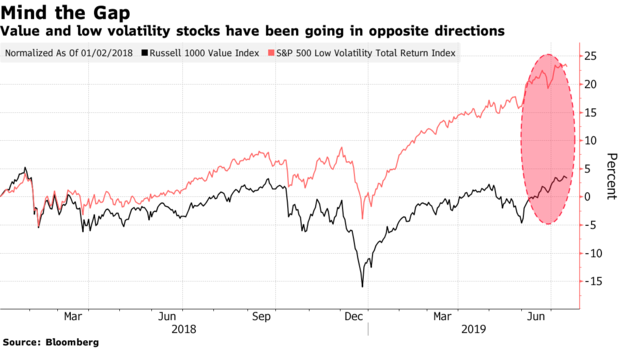 This effect is further illustrated by indexes that track low-vol stocks, as many low-vol stocks have benefited the most from this recent strong run for momentum. As of early September, the Fidelity Low-Volatility Factor ETF (FDLO) was up nearly 25% YTD, 400 bps above the market, with gains of 6.3% during the three, volatile summer months. The corresponding Value Factor ETF (FVAL) returned barely half as much over the summer with a portfolio of companies that had better growth prospects than FDLO’s and were selling at just over half the price (measured by free-cash flow).

For Invenomic investors, the summer does not provide any cause for real concern. For prospective investors, it might provide an interesting entry-point. Mr. Motamed’s description of his investment discipline is “grind, grind, grind, pull back, then explode.” While the fund’s expense ratios remain a concern for us, since they create a permanently high hurdle for the managers, they have, to date, earned their money. For prospective investors, they warrant attention, investigation and dialogue with the team.