The typical American of today has lost all the love of liberty that his forefathers had, and all their disgust of emotion, and pride in self-reliance. He is led no longer by Davy Crocketts; he is led by cheer  leaders, press agents, word-mongers, uplifters.

On balance, it is somewhat hard to believe that in a few short weeks, we have gone from the domestic markets hitting new record highs, albeit with a continuing narrowing of breadth, to what is a full blown correction, with the markets now off by more than ten percent. And as we look to Monday, the first trading day in March, the question is have we reached a floor, or is this going to continue on for some time, wiping out performance gains for all of this year and go on to erase all or a substantial part of 2019’s profits.

What triggered the sell off this past Monday, which was a global event? More than likely, it was fear of the unknown. The current known unknown is the corona virus and what its potential impact will be on  . . . everything? The simple answer, or at least my simple answer is, that we don’t know. Nor is there any good way to handicap things. For years, we have been moving towards a much more interconnected world and effectively, an integrated global economy. We can now see the downside of that when, globally, countries and their health care systems are at different levels of quality. There is effectively no ability for there to be a consistent and timely global response across borders to a health care crisis.

Jason Zweig of the Wall Street Journal had an interesting column the other day, “The Pros Have to Sell Stocks Now. You Don’t” (February 20, 2020). He made the point, in his usual elegant fashion, that retail investors had the luxury of sitting back and not being 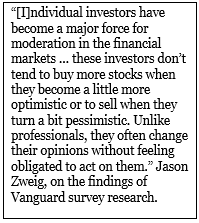 panicked or forced into liquidating investments. He felt that much of the carnage taking place could be attributed to the actions of professional investors, who were focused on preserving their jobs rather than doing what was best for their investor clients. After all, the consultants will be searching for someone to blame for the losses suffered by their clients. Without that pressure, the individual should be able to assess whether his strategy is still appropriate and if not, how it should be modified.

What should you do as an individual investor? My efforts are going in to assessing, as suggested many years ago by Mr. Buffett, that one should look at the investments in one’s portfolio one by one. Would you be comfortable owning them if the market were to close for one or more years, so you would be owning them as a truly long-term investor? As with the prospect of hanging, that analysis does a good bit to clarify the mind. One can see what is real, and in many circumstances, apply a much more draconian assessment to things like leverage and cash flow. And especially important is the consideration of the exposure of your investments to unintended consequences.

For example, it is now apparent that having sole source supply of the fine chemicals needed to manufacture certain pharmaceuticals only in China, is perhaps not such a wonderful thing. We had some hint of this last summer when certain drugs for hypertension were in short supply due to an inability to source the raw materials to make them. In sum, you are going to have to examine, redo, and rethink many of what were your assumptions, which are now not so certain. And it won’t take much to see how certain industries like travel may be impacted.

Why not just sell everything and go to cash? Well, aside from triggering some permanent losses 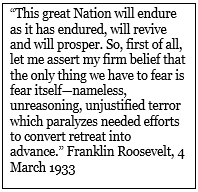 of capital, there are businesses that will continue to chug along and do quite well. Besides, if you sell everything and go to all cash, how will you know when to reinvest in equities? You won’t.

Rather than belabor the obvious, I am going to close with one quote from the Depression, when Franklin D. Roosevelt said in his 1933 inaugural address, “The only thing we have to fear is fear itself.” 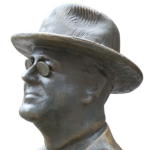