“Imagine the Creator as a low comedian, and at once the world becomes explicable.”

We have come into December with November having been one of the best performing stock market months ever. S&P 500 Index products have generated a total return of approximately 14%. Active-managed funds have had returns all over the lot, with value-oriented funds having crept into the positive return range, generally single digit, as a result of strong monthly performance. Growth funds, depending on their holdings generally performed better, with some such as Harbor’s Capital Appreciation Institutional Class Fund having a total return of 47% year-to-date. International funds are all over the lot as well, with the value-oriented ones generally performing positively but with single-digit or teens total returns. The growthier ones, especially those with exposure to Asia in general and China in particular, generally did much better. And if you owned the Matthews China Small Companies Fund, your year-to-date total return was in excess of 66%.

Now one month, one quarter, one year, or even three years of performance numbers does not make for the ability to discern a good investment from a mediocre or bad investment. To get a sense as to where the asset management industry is now, I commend to you the section that was a Special Report in the November 14th, 2020 issue of The Economist entitled “The money doctors.” Much of this you will know, such as the quality of the business (high operating margins) and competition in what is a commodity product driven by marketing, new product development, and security selection driving outperformance. Unfortunately, the asset management industry does not operate in Lake Wobegon. It is impossible for all investors to have an above average return.

One of the more interesting questions is why investors put up with subpar performance (at least relative to passive products) over a long period of time. The article makes the point that much medical advice given by physicians is generic and self-serving. Yet it is valued by patients. Likewise, asset managers also often give generic and self-serving advice whose purpose is to inspire in individuals the confidence to take on investment risk.

More on the piece I will not say, other than to strongly suggest it is worth the time to plow through it. Among other things, salvation for the industry, at least in the short to intermediate-term, may come from the growing pool of investments and investors that is China. As with all things involving the Chinese, where things go in the future is not easy to predict at this point. But, ignoring China and along with it, its capital markets would prove to be a rather short-sighted mistake with serious consequences. 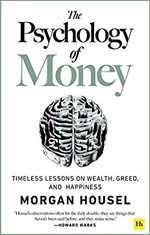 A second book which I commend to all of you for your Christmas reading is The Psychology of Money by Morgan Housel, which was recommended by my friend Jason Zweig at The Wall Street Journal. Housel does a great job of explaining hard things in an understandable manner. If I were still at an investment firm, this is the book that I would be recommending that the firm sends to all its clients.

Among other things, he closes out by making it clear (at least to me) how we got to the point that we find ourselves in American society now. Specifically, “expectations move slower than reality on the ground. ….. And even if a middle-class boom began today, expectations that the odds are stacked against everyone but those at the top may stick around.” The era of things not working and needing radical change may also stick around. And the important part of his conclusion is that this was the starter’s pistol for many similar events that in turn led to things like World War II. Hmmmm.

As I watch the concern about vaccine approval and distribution, I want to relate the information that I received from a friend involved with The Fred Hutchinson Institute in Seattle. They have been following the data from Pfizer and Moderna. One, they feel it astonishing that you had two large scale efficacy trials enrolled and completed independently. Two, the “spike” part of the RNA transcript is essentially identical, allowing a certain level of confidence about the veracity of the efficacy data. The relative similarity of the efficacy data means that either vaccine can do the job, making the logistics of distribution somewhat easier.  Finally, the U.S. Government (this administration, Operation Warp Speed) has contracted for 100 million doses of vaccine from each company. Although the timeline is not definitive, you should see those doses by April/May 2021. That means approximately 100 million people in this country should be able to be vaccinated by the end of the 2nd quarter. Depending on whom you talk to, herd immunity should be conferred when somewhere between 40 – 70% of the population has been vaccinated.

Estonia proves trust is at the heart of online voting, Marketplace, 11/02/2020

I had a talk with a cybersecurity expert about the stories one keeps hearing about fraud in the software programs sold to and used by various jurisdictions in this country. This individual thought that the likelihood of massive fraud to the degree that has been alleged was unlikely, if not impossible. That said, he indicated that there was a rather easy and elegant solution. And it is a solution that is apparently used in Estonia. Each person registering to vote, with the appropriate identification, would be given a digital cryptographic key, unique to that individual. For those for whom I am speaking in tongues, think “Bitcoin” and blockchains. You would be able to vote as many times as you wanted, but each time you voted in a particular election, the prior vote would be wiped out. Of course, in issuing that cryptographic key, each jurisdiction would have to set its own criteria for registering a voter and handing out the keys. And there would be other issues that would have to be worked out. But, there exists technology to make voting and other citizenship issues relatively fraud-proof.

I noticed not too long ago a discussion thread with Charles and others about whether Berkshire Hathaway should be considered the equivalent of a mutual fund or ETF. For my two cents, the major difference is that as pertains to Berkshire or Markel or Brookfield Asset Management, they are vehicles with permanent capital. With the mutual fund, in theory, all your investors could redeem and be out the door in a week (although laziness goes a long way to explaining the survival of investment mediocrities).