Rondure Overseas invests, primarily, in the stocks of corporations located in developed markets outside of the US. The managers pursue a benchmark-agnostic, active style that allows them to invest in stocks of any size. In general, they aspire to invest in great companies at good prices. They have the freedom to invest in good companies at great prices, but the wisdom to play that game rarely.

The quantitative markers of being a great company include strong balance sheets, stable free cash flows, and high returns on capital. The qualitative markers are “compelling competitive advantages,” which might include elements of the business niche and strong, responsible leadership.

The portfolio currently holds 95 names, with 25% of assets concentrated in its top 10 holdings. Its largest sector is consumer stocks (49%), which it overweights by 2:1 relative to its benchmark. It earns exceptionally high grades on sustainability and for the carbon footprint of its holdings.

Laura Geritz, CFA and Blake Clayton, DPhil. Ms. Geritz is Rondure’s founder, co-CIO, and CEO. She began her career at American Century as a bilingual investor relations representative, a position that continues to shape her thinking about her investors, their needs, and her obligations to them. She moved to the investing side in 1999 at American Century and eventually joined Wasatch Funds in 2006, where she spent a decade. Her portfolio included managing Wasatch Frontier Emerging Small Countries Fund (2012 – 2016), Wasatch International Opportunities Fund (2011 – 2016), and Wasatch Emerging Markets Small Cap Fund (2009 – 2015). Her Master of Arts is in East Asian Languages and Culture, she’s lived in Japan and speaks Japanese.

Dr. Clayton, a serial underachiever, has a Master of Philosophy from Cambridge, a Master of Arts from Chicago, a Ph.D. from Oxford, and served nine years at the Council on Foreign Relations.  He’s written two books, Commodity Markets and the Global Economy (2015) and Market Madness: A Century of Oil Panics, Crises, and Crashes (2015). The only negative Amazon review I found of the latter starts with the word “disssapointing.” Enough said. He joined Rondure as a research analyst in 2017 after a stint as a senior equity analyst at Citigroup and was appointed Rondure’s co-CIO in 2020.

Rondure reports that the asset capacity for the strategy is roughly $5 billion. They will evaluate a soft close at $2.5 to $3 billion, as determined by their ability to remain all cap and still purchase some of their smaller opportunities.

$1,000 for both Investor and Institutional shares. The fund is available for purchase directly and through Vanguard, TD Ameritrade, Schwab, and Commonwealth, among others. If you choose to buy the Investor shares, the higher expense ratio pays for no-transaction-fee purchases. If you plan to invest directly with Rondure, the Institutional class is the sensible option.

1.1%, after waivers, for Investor shares and 0.85% for Institutional ones.

Investing is hard. Professionals and amateurs alike struggle to sort through thousands of options while being buffeted by their own primal emotions and the endless roar of mostly-irrelevant noise from the media. Both sorting things out and keeping faith become difficult.

Investing can be easier. The Observer’s credo is simple: think through what you’re really trying to accomplish, find a high-quality partner to help, stay the course, get on with life.

Rondure Global would be an exceptionally high-quality partner for you, in part because they seem to practice what we preach. That conclusion is supported by long conversations with the firm’s founder, by a careful reading of the fairly rich literature they produce, and by an analysis of what they do and how they’ve done.

Rondure looks to invest in high-quality companies. The underlying argument is simple: quality succeeds. “Quality” is a debatable notion that might be embodied in a dozen different ways. The cool thing is that regardless of your precise definition, it succeeds over time across markets (it’s been tested in Hong Kong, Japan, Korea, Singapore, India, Australia, Taiwan, Central and Eastern Europe, as well as the US and other developed markets) and across market cycles, and it succeeds by a variety of return and risk-return measures.

Rondure’s efforts to find quality companies in which to invest comes in three ways. First, they look for firms with strong balance sheets, stable free cash flow, and high returns on capital. Those are all pretty conventional markers of corporate quality.

Second, they look at the business universe within which the corporation operates in order to find firms whose attractive metrics might endure. They’ve identified three characteristics that give a firm staying power in the market and aspire to invest in fairly-priced firms that show all three. Here’s their picture: 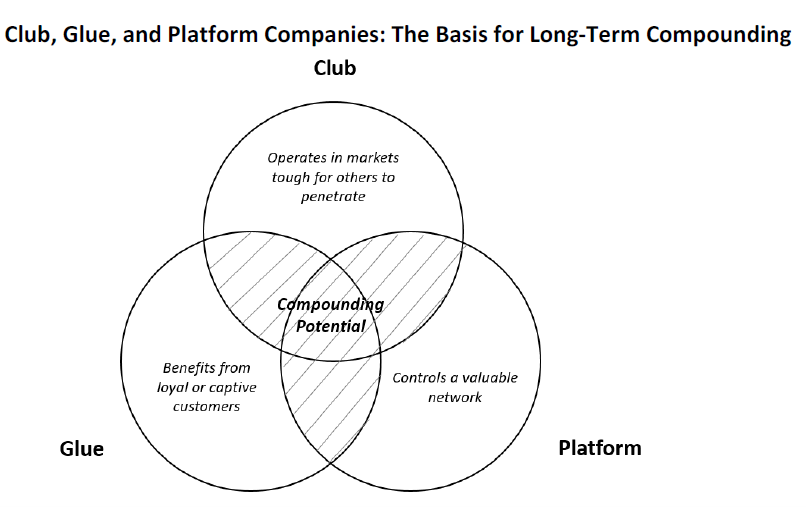 The goal isn’t to find the firms (hello, Tesla) that “won” in 2020. The goal is to find the firms that will still be winning in 2030 (take care, Elon!). The folks at Rondure argue that the combination of “moats,” captive customers, and a network effect allows a firm’s success to persist year after year. They are “quality compounders.”

Third, they look for firms that are managed responsibly. The quality of a firm’s governance has always mattered to its success; it is only recently that investors have also recognized that corporations operate within social structures and physical environments whose health also profoundly affects the firm’s long-term prospects. Put bluntly, starving neighbors and raging storms benefit no one.

Rondure approaches their assessment of a firm’s level of responsibility with a spirit of grace: given the culture within which they operate and the constraints of their industry, are they doing the best they can? Are they getting better? Are they willing to listen to informed and sympathetic critics who are looking to partner with them? If so, they are quality people.

Ms. Geritz, in her 2020 white paper on quality investing, expresses her firm’s bottom line this way:

Our aim at Rondure Global is to deliver clients excellent long‐term compounded returns and mitigate loss of capital from large drawdowns. We think that owning companies with exceptional profitability, strong balance sheets, and wide competitive moats is the best way to accomplish that. As we see it, holding companies of this profile raises the odds of outsized long‐term returns without the downside risks of owning lesser‐quality firms. It’s a relatively simple way to approach the market—which is partly why we think it works—if applied in a disciplined way over many years. Everything we do at Rondure in terms of our research and investment process is designed to work toward that goal.

They are, she concludes, “companies to whom we feel comfortable entrusting our clients’ capital, confident that they can do extraordinary things with it….”

By Morningstar’s calculation, the fund’s portfolio is substantially higher quality than its peers: far fewer “no moat” companies, higher grades on financial health and profitability, higher returns on invested capital, higher free cash flow and so on. Similarly, by Rondure’s calculation, it is substantially higher quality than its benchmark MSCI EAFE Index based on return on assets, return on equity, net debt and EV/EBIT.

All of which has led to very satisfying performance.

Since its inception, Rondure Overseas has produced solid returns pared with absolutely first-rate risk management. That’s less a matter of individual genius, she might argue, than an intrinsic characteristic of getting quality investing right.

The fund screener at MFO Premium offers a snapshot of Rondure Overseas’ performance since inception against its Lipper peer group.

Here’s how you read that.

APR, the fund’s annualized percentage returns, is 5.3%, which is a touch below its peers.

The fund’s maximum drawdown (17.6%) is far smaller than its peers, and its recovery from that drawdown (seven months) was far quicker.

The fund’s standard deviation (the most common measure of a portfolio’s volatility) is far lower than its peers, as is its measurement of downside (or “bad”) volatility.

In consequence, all four measures of risk-adjusted performance – the Ulcer Index (which factors together how far a fund falls and how long it stays down, with lower values signaling fewer ulcers on your part) and the Sharpe, Sortino and Martin ratios – are substantially better than their peers.

In most cases, those risk measures are not just a little better: they’re absolutely top-notch. Over the past three years, Rondure Overseas has the second-best bear market deviation among 141 funds, the best downside deviation, the best down market deviation, and the second-best downside capture (relative to the MSCI All Country World minus US Gross Dividends Reinvested Index, which gets shortened in the MFO data tables to ACIxUS index). It shows an admirable asymmetry over the same period, capturing 70% of the index’s upside and only 57% of its downside.

Rondure’s advantage over its peers was particularly striking during the Covid Bear at the beginning of 2020 when it posted a top 10% performance, losing 17.6% which was 3.5% better than its average peer.

In short, Rondure has succeeded.

In addition, Rondure strikes us as a quality partner for you. In a long and thoughtful shareholder letter, Ms. Geritz talks a bit about her own life and its movement from a young woman in rural Kansas to an investor on a world stage. She has been phenomenally successful as a professional investor. Lewis Braham, writing in Barron’s of her work at Wasatch International Opportunities, concluded that she “crushed” her peers (“Should You Follow a Star Money Manager?” Barron’s, 9/10/2016). Her signal charge, Wasatch Frontier Emerging Small Countries, returned 15-times what her competitors did. But as she traveled those challenged and striving countries, she came to a poignant and powerful conclusion:

Somewhere along the path of making money, I got too busy to do as much good as I aspired to.

Rondure works to change that with three core principles: make money for our clients, Do Good and be great partners. To that end, she’s constructed a diverse and brilliant staff, has invested enormously in her own funds and has yet to receive a dollar in salary. She writes and speaks sensibly. She’s earned the respect her peers have richly accorded her. She’s earned ours. She would earn yours.

As you’re pondering your interest in the funds, you really need to read Ms. Geritz’s letter to her investors. It’s intelligent, heartfelt, reassuring, and literate. Of her modest beginnings in the industry, she writes:

I started in this industry as a client relations representative. I have and never will forget my time on the phones dialoguing with all levels of clients. The lesson is and always will be that this is not our/my money; it’s yours. It is your dreams and goals we need to deliver. You deserve the utmost transparency from us. It is our goal to provide this. Our beliefs are simple. We are here for you, not for us.

It’s not a fund for everybody. None are. It is, it seems to us, a fund for people who prefer to get rich slowly and steadily, rather than those looking for “moonshots” in their portfolios. You might benefit from learning now, most especially if you imagine that the slow recovery from Covid and the weakening US dollar might begin to move the pendulum away from the narrow, manic rally that has recently dominated the US market.

Rondure Global. Their shareholder letters and white paper on quality investing live under the “resources – literature” tab. The “people” tab has been updated to reflect the recent additions of former Matthews Asia manager Lydia So, CFA to the investment team and former Cambiar Investors partner Karl R.S. Engelmann on the business development side.