“Finance is the art of passing currency from hand to hand until it finally disappears.”

So, to paraphrase Churchill, are we actually at the end of the beginning, at least as it pertains to the war against the coronavirus? Well, maybe. In this country, there are two vaccines approved, and globally we are looking at a total of four at this point that seem to meet the hurdle rate of at least fifty percent efficacy (Oxford-Astra Zeneca and Sinopharm (China) being the other two). Just as getting fiber optic cable laid that last mile to a home being the most challenging and most expensive exercise, getting the vaccines into the arms of the population seems to be the problem. And then, of course, there are now the politics of deciding which part of the population goes first.

Much to my surprise, the United Kingdom seems to have a solution that is working on getting a large part of the population inoculated. Prioritization is done based on age, oldest first, and appointments are given by postal code. This would seem to be a quick way to get large numbers of people inoculated on the first pass in Chicago, accessing databases for voting and driver’s licenses and mailing out the appointment cards. But that is probably too simple. 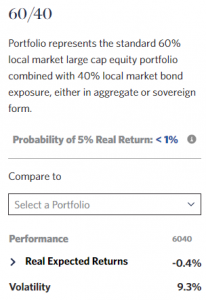 That is a good question with no immediate answer. With interest rates as low as they are and markets across the board as high as they are, what is the correct asset allocation? The traditional 60% equity/40% fixed income allocation, which is the classic balanced fund allocation used by many defined benefit pension plans, does not work at present. Specifically, looking forward to the next five to ten years, the expected returns from the equity portion as well as the fixed income portion are lower than they ever have been before in this country. One usually expected one to anchor and offset the other over time and in volatile markets. Not now. Put bluntly, there is no margin of safety in either asset class.

So, what is to be done? Certainly not cash, where if you are getting one or two basis points on a money market fund, you are doing quite well. But your purchasing power will be eaten away by inflation, especially given that the Federal Reserve will be trying to inflate away the nation’s debt (and will succeed in continuing to drive the dollar lower).

Previously I have argued for uncorrelated investments in periods such as this. Large capitalization, liquid equities, especially tech, are overvalued, even taking into account the low interest rate scenario. Smaller capitalization equities, especially value, are generally not. But in both instances, beware of situations where the business has too much debt leverage. You are looking for asymmetric opportunities. As Howard Marks of Oaktree has said, “If you find an investment where if things go well you’ll make 30 percent and if things go poorly you lose 30 percent, it’s not a great thing.” And he also makes one other point, which is that if you have a downward market or economic fluctuation, an unlevered portfolio will make it through, a levered portfolio will not.

One other point I think that Howard Marks makes so well applies to for-profit as well as not-for-profit businesses. “Most of the real challenges in economic history have come from people who have overestimated their ability to live through bad times with a leveraged structure.”

So, where to invest? I think ultra-short fixed income, especially very low duration, is an area of interest (and like David Snowball, I am a fan of RiverPark Short Term High Yield fund). I am also a fan of the now-closed FPA New Income fund, which I own. In terms of small-cap value funds, there are a number on our list. That is an area I am thinking about still, as a number of those funds are starting to embark on succession plans with new co-managers brought in. What I would say is, don’t be greedy in terms of what you should be thinking of at this time for an expected return.

Given the year we have had, why is governance important? At the investment management as well as the corporate level, you want to avoid situations where the portfolio managers or the corporate managers are putting themselves ahead of the investors or shareholders. This WILL be a year to be reading carefully the Statement of Additional Information from fund managements to see how much they have invested in their product, how much their board has invested in the product, and how they are being compensated.

For corporations, it will mean a very careful reading of the proxy to see how management compensation is being addressed. You need to be looking at total compensation in light of today’s environment. You also need to be looking at options or the other equivalents used to increase management compensation beyond salary and bonus. As many of those will be under-water at this point, look carefully to see whether they are what they are or whether a rejiggering is being proposed. Being an investor does not mean that you always come last relative to the management. Finally, look carefully at board composition, which will tell you something about whether you have a group of rubber stamps or a group of fiduciaries.