Chip and I escaped for a bit this month. We headed northeast to Door County, the peninsula that extends above Green Bay, Wisconsin. Like the Dingle Peninsula in Ireland, Door County represents “my happy place.” For folks unfamiliar with it, imagine a less commercialized version of Cape Cod: water on both sides, farms in between, cherries everywhere, no chain restaurants at all, and a series of small lakeside or bayside towns whose permanent populations number in the hundreds.

Here was the plan: disconnect from the outside world, and connect with each other.

It worked. We didn’t have a computer. Total TV time was zero. Our phones were dormant, except for checking restaurant hours. We started each day with ridiculously strong coffee and a snack, targeted one really good meal each day (lunch, which was cheaper and quieter than dinner), sensibly substituted dessert for our evening meal, and spent as much time in the woods and on the water as in shops or galleries. And then, sat happily in the really, really dark at Newport State Park, on the Lake Michigan side, which is one of only 48 internationally recognized Dark Sky Parks in the world. 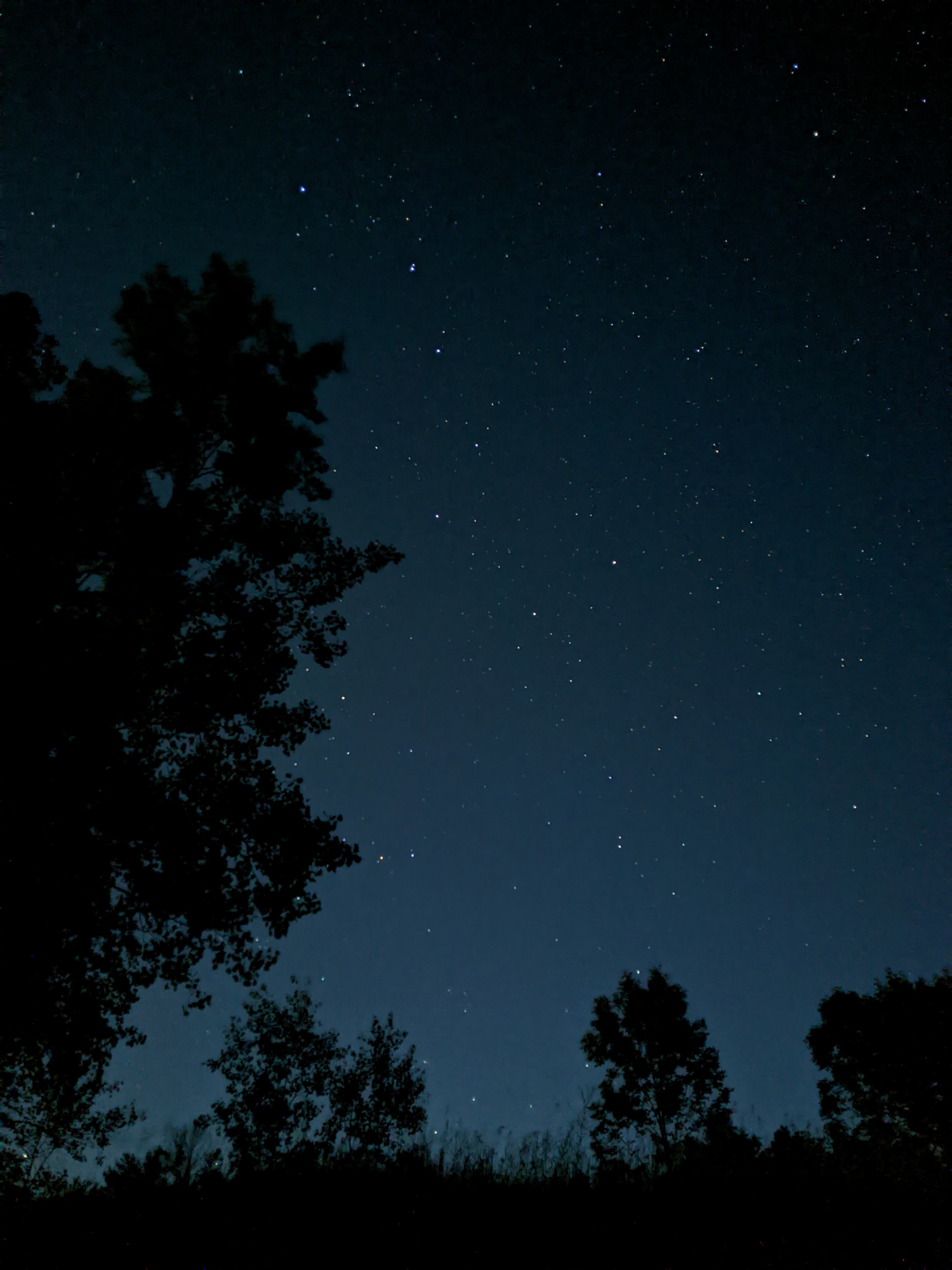 Shot with a Pixel 3 Android phone propped up on twigs in the sand.

The MFO homepage has a picture of me sitting on a dock in Ephraim, Wisconsin, at the site of the old Anderson’s General Store, which is now a gallery. Chip and I returned there this summer and, I must say, I like the look.

Regrets for the thousand bits of administrative stuff that I didn’t promptly pursue, from slow responses to your questions to late check deposits.

In the meantime, the guys have been working hard!

This month, Devesh gets serious about the abject and ongoing failure of TIPS. Really, they have only one job (“inflation protection” is right in the name), and they’re falling down at it. He works through why that’s the case and when it might be worth looking at them again.

Lynn Bolin celebrates his second month of retirement (a lot) and uses it as an opportunity to walk through the decisions and challenges that investors face in making that transition.

Mark Freeland begins a two-part series, walking through the weird and wild world of ESG investing. This month, he provides an ESG primer (pronounced “primmer” rather than “pry-mer”) that examines key concepts and constraints. In October, he’ll get more into the use of ESG by index makers and fund companies.

Charles Boccadoro, who is summering in Canada, shares the fate of The 100 Club with you. Near the end of the bull market, I wrote a bit about the hundreds of funds that were up over 100% in a year. Charles tracks down the fate of those former titans. (It’s not pretty.)

And a debut! Don Glickstein joins the conversation this month. As you know, we published a death notice for Morningstar’s fund screener, the new version of which has been dumbed down to the point that it occasionally forgets to breathe. Rather than merely mourning the mess, Don reached out to folks at the highest levels of Morningstar to criticize the bog. Perhaps surprisingly, they actually reached back out with explanations and promises.

Finally, The Shadow provides a recap of the industry news – though I have to admit that I’m the one guilty of the snark concerning inverse leveraged single-stock ETFs.

Thanks to them all for their stalwart public service. They make a difference, and I hope you enjoy their work.

A warning about letting your guard down: Don’t.

The most famous intervention by the Federal Reserve in the past half-century occurred in 1980, the last time the Fed was confronted with high, persistent, and pernicious inflation. The Fed chair, Paul Volcker (1927-2019), raised the Fed funds rate to 20% in May 1980, saw inflation rise the moment he tried to ease off, slammed the rate back to 20% in December, and kept it above 16% through May 1981.

By contrast, after 75 bps hikes at its last two meetings, the current Fed funds rate target is between 2.25-2.50%. Current options data shows that traders believe that the Fed won’t take rates above 3.3% – just one-seventh of the rate that they’ve imposed before.

The most common description of Volcker’s action is violent, graphic, and accurate: he broke the back of inflation.

To be clear, breaking one’s back is excruciating and crippling. The way he broke inflation’s back was to nearly break the back of every person exposed to the US financial system. The necessity was simple and brutal: he needed to impoverish hundreds of millions of people in order to get them to stop spending money and driving prices up. A recession ensued. Unemployment popped to its highest level since the Great Depression. The number of Americans living in poverty rose by two million. Angry voters raged against the president and the party then in power in the November 1980 elections.

But inflationary expectations and, with them, inflation, were crushed.

That’s all background to an important podcast from Marketplace (29 July 2022), entitled “Enjoy the summer because the Fed drops the hammer this fall.” July saw prodigious gains by risk assets – stocks up 9%, corporate bonds rose nearly 4%, and high-yield corporates up 6% (all measured by the performance of their respective Vanguard ETFs) – which telegraphed one unambiguous message from investors:

Pretty much the only possible response from the Fed is to move to inflict greater pain, quickly, and with less warning, as a way of shaking investor complacency. The Fed signaled that they want evidence that economic conditions are “appropriately tight,” and a 4% stock market rally in the two days after their latest hike conveys the opposite.

The Federal Reserve, in the person of chair Jay Powell, has been really clear they’re going to raise interest rate as much as they can [to force] people to spend less money, companies to less spend money and thus slow down the economy. [But falling bond yields in July means that money is getting cheaper, not more expensive.] But the markets are saying “hey Jay, pound sand, man. I don’t care what you think.” … This means that the Fed is going to have to, in their September meeting, drop the hammer. “No, no, no. We’re done screwing around.” They’re going to absolutely clobber us. They need to trim these expectations right the bleep now.

Sidebar: What is Marketplace?

A nonprofit news organization, Marketplace is part of American Public Media, one of the largest producers of public radio programming in the world. They have about 14 million daily listeners. And while American Public Media and NPR are both public media brands, we’re two different organizations. They produce some of the best, most accessible economic programming in English. Their mission is to help economics make sense “for the rest of us.” Their tone is light, intelligent, and balanced. Also informal, which might unsettle some. I’d strongly endorse Make Me Smart and Marketplace as daily listens.

What does this mean for investors?

First, it means you have a choice to make. You need to decide to what degree you believe the optimists – traders think the Fed is about done, FundStrat says “the bottom is in,” and we’ve got a 16% upside by year’s end, Morningstar declares that stocks are trading at historically cheap prices – and to what extent you’re willing to bet your financial future that they’re right. If you’re very confident, it’s risk-on time. If you’re not, it’s time for caution.

Second, you might start adding defensive stars to your due diligence list. Over the years, we’ve highlighted funds run by risk managers, that is, folks who understand that the surest path to long-term success is avoiding overconfidence and overexposure to risk. They tend to favor high-quality businesses purchased at a discount and generally have the ability to scale back equity exposure when things get frothy. Articles like the “dry powder gang” series give you a list of such folks. For the nonce, you really need to learn more about such managers.

This list is neither exhaustive nor a recommendation to buy. It represents some of the most solid investment vehicles we’ve seen, based on their ability to manage across a variety of markets.

Our recommendations: (1) don’t take silly risks. (2) do take time to learn more about options that have been out of the market’s liquidity-driven sweet spot: speculative, growth, large, and tech.

Bill Gates is a remarkable person. In many ways, amazing. In some ways, quite admirable. He’s a guy who changed the world with a project that he began as a 15-year-old. 1590 on the SAT. Started at Harvard, dropped out, wrote code, cut throats, and became the world’s richest person … once on a trajectory to become its first trillionaire.

And then … he changed? I won’t speculate as to why, but his more recent persona might lead us to look at ways To Be Like Bill.

As ever, to the tens of thousands of folks who share a part of each month with us. If you read something striking, please do take a moment to respond to the author … perhaps tweet the article (we embed links), post a comment to our discussion board, or drop them an admiring (or aggrieved) email. All of us are just [email protected]

Thanks most especially to the folks whose financial support helps keep the lights on and spirits up: The Suranjan Fund, Andrew from Ohio, Paul, Sherwin, and our faithful regulars Greg, William, Brian, William, David, Doug, Wilson, and the folks at S & F Investment Advisors. Cheers to you all!

I’ve spent much of July disconnecting from the need to dash around, recharging a bit, and marveling at our ability to make a difference. As a simple example, when I first bought my little 1970s split foyer house in 2014, I would have been lucky to see 20 bees a day in the yard. This month, after slow and serious attempts to reintroduce native plants in place of swathes of lawn, I wouldn’t be surprised to see 20 species of bees in a day, from carpenters and bumblebees (some big enough to cause flower stalks to bend under their weight) to hoverflies and mason bees. Goldfinches have been at their annual seed raids, and so many birds were plucking viburnum berries that whole bushes quaked. For the first time in rather a while, I’m sort of looking forward to the adventures ahead.

Those adventures will soon include a profile of DGI Balanced Fund (one of the best performing and most distinctive in its class), Harbor International Small Cap (run splendidly by the Cedar Street Asset Management folks), and Port Street Quality Growth (which has been “the next fund we really need to look into” for about two years).

Be good to yourselves!