“Maybe the mind’s best trick of all was to lead its owner to a feeling of certainty about inherently uncertain things.”

Took a while, but we’ve finally added rolling average analysis to the MFO Premium site.

The new Rolling Averages tool provides insight into how returns vary for selected rolling periods of interest. Each period overlaps the next, separated by one month, across the life of the fund. This insight is especially important when establishing expectations based on an investor’s risk tolerance and time-line, as it reveals best and worst performance history.

For example, the venerable Dodge & Cox Stock Fund (DODGX) has an outstanding long-term annualized return of more than 11%/yr from its inception more than 50 years ago through August 2017. But it’s incurred stretches of 3-year periods where the annualized return was a gut-wrenching -20%/yr (that’s per year!) and even 5-year periods where the annualized return was a discouraging -8%/yr. That said, the fund has never returned less than 1.2%/yr in any 10-year period. (For more insight on DODGX and rolling average analysis in general, see A Look Back at Dodge & Cox Stock Fund).

The rolling periods are 1, 3, 5, 10 and 20 years, as applicable, based on age of fund and selected display period.

For each rolling period, the table provides:

Display period defaults to Life (ie., performance since fund inception, or at least back to January 1960 … the limit of our Lipper database), but can also be selected for the past 20, 10, 5, or 3 years. The latter options are helpful when making direct fund-to-fund comparisons.

Here are their 10-year risk and return metrics (click table to enlarge): 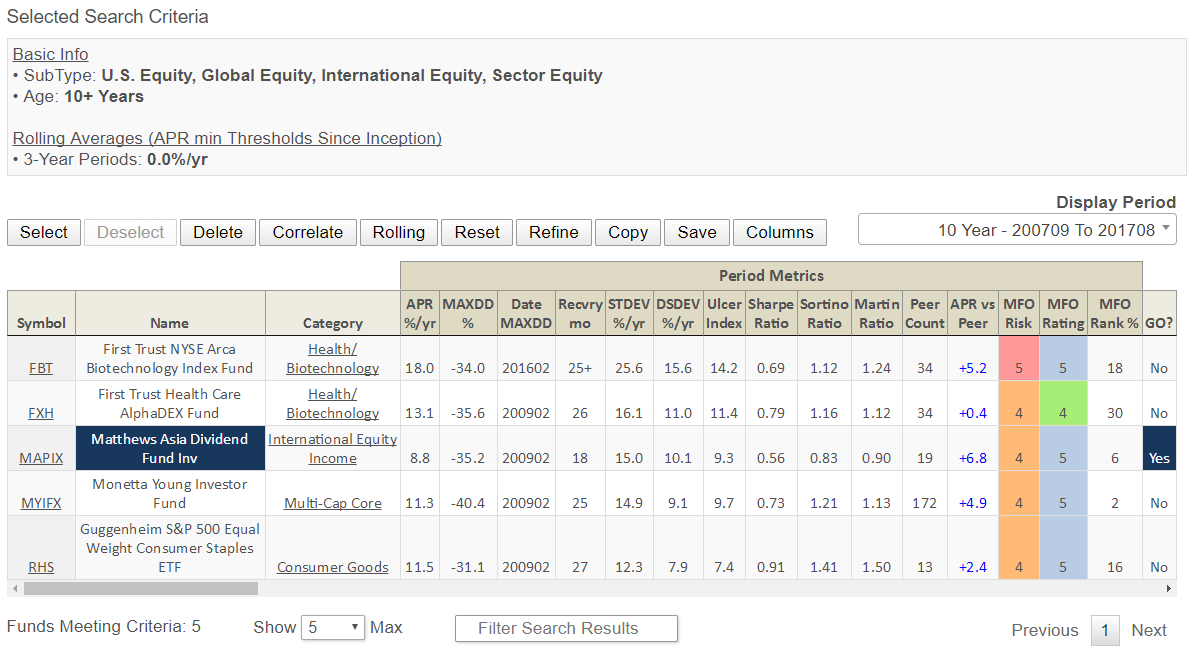 Then, performing rolling analysis results in the following (click table to enlarge):

What does that tell us? Using RHS as the focus of our discussion:

Do these calculations say that one of these funds is better for you than another? Definitely not, since they invest in very different universes and they all represent “best of class” offerings by this measure. If these were all, say, small-cap value funds of a similar vintage, you would get a far better sense of the consistency of a fund’s performance and of how to understand the experience you might have had with it in the last three years by comparing those three to all three year periods and even to the longer term.

Ideally, all fund performance should be presented in rolling analysis format, along with maximum drawdown, since that is only way can investors get a realistic assessment of how volatile a fund has returned historically.