“If someone invented levitation tomorrow, it would still take five years to catch on.”

The last panel, entitled “Meet the Pundits,” enjoyed a winner’s circle atmosphere this year. It included Barron’s Crystal Kim, Morningstar’s Ben Johnson, Matt Hougan of Inside ETFs , Tom Lydon of ETF Trends , and Dave Nadig of ETF.com. As reported in our July Commentary, ETFs recorded another banner year of inflows, twice those of last year, and seem poised to overtake assets of traditional open-ended mutual funds in the not-to-distant future.

As anticipated, Morningstar announced that this would be the last stand-alone ETF conference. Next years’ Investment Conference will include an “ETF Track.” Except for the fact that it will be in muggy June versus glorious September, combining the conferences is welcomed news. There were 714 attendees at this year’s event held September 6-8 at the Hyatt Regency Chicago. 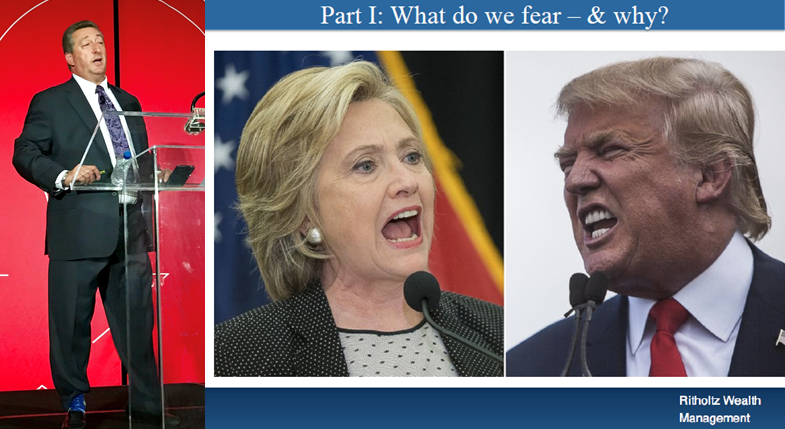 Barry Ritholtz gave a thoughtful presentation, entitled “Crashes & Terrorists & Sharks, Oh, My! Why investors FEAR the wrong things, and what you can do about it.” He was kind enough to share a clear pdf version, here.

Barry reminded us of our fear of sharks after Steven Spielberg’s Jaws and our fear of flying after 9/11. I personally remember walking through an empty airport at LAX on 9/11/2002 in route to a conference in Toronto. Besides the crew and air marshal, I was the only person onboard. Barry cited a statistic that estimates 15,000 more people died in car crashes as a result of their fear and avoidance of flying after 9/11. Similarly, there are more deaths around the world each year from selfies than sharks … and humans continue to obliterate the shark population. As you can guess, he sees many of the same fears and ironies with investing. 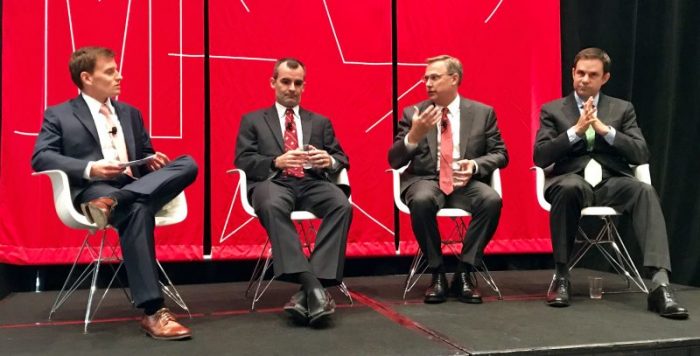 The elephant in the room, however, was John Ameriks, or more accurately the group he represents. He heads Vanguard’s Quantitative Equity Group (QEG), which we profiled last November. QEG currently does not manage any ETFs, but on last day of conference, Bloomberg’s Eric Balchunas tweeted a Barron’s news report that the SEC plans to approve Vanguard’s application to offer actively managed ETFs, which many suspect would be led by QEG.

Ben Johnson, Alex Bryan, and Adam McCullough presented a series of briefings on Morningstar’s latest research, ETF due diligence, and assessing stewardship practices. Here is link to their briefings and below is one of my favorite charts. Ben, who still prefers the term “Strategic Beta” over “Smart Beta,” says the colors were inspired by one of his children’s books! 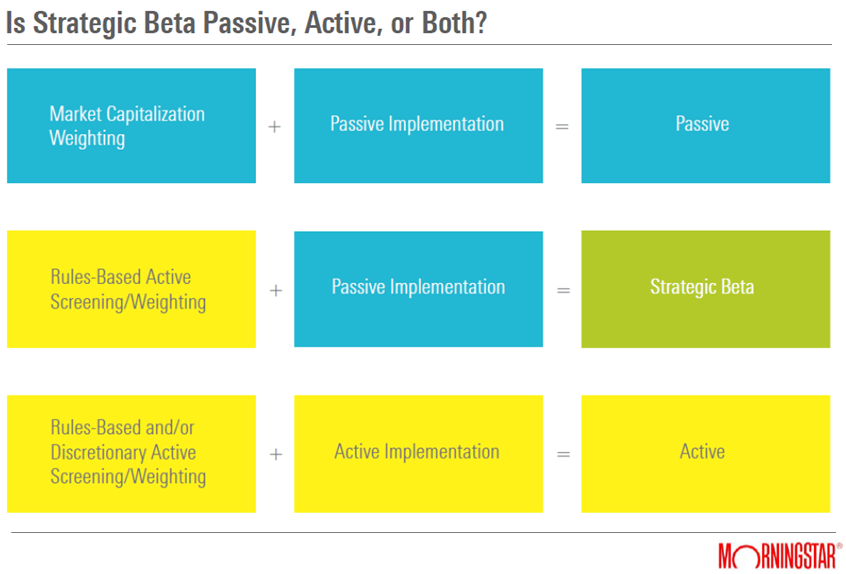 All three briefings are worth reviewing. You will learn why Alex prefers Vanguard’s Small Cap ETF (VB) over iShares Russell 2000 ETF (IWM), that “a handful of the largest fund companies have controlled passive U.S. fund assets for at least the past 15 years,” and why Adam thinks “fund closures are not a victimless crime.”

Vanguard’s Joe Davis gave the opening keynote, captivatingly entitled “The Trend That Will Define Our Lifetime.” He believes the changing nature of work driven by technological advances is the seminal issue of our time, and that traditional measures, like GDP, are missing forces driving the economy, especially productivity and prosperity. This situation has created three paradoxes: 1) low inflation, but full employment, 2) low growth, but high valuations, and 3) low volatility, but high uncertainty.

He explains that historically, work has shifted from “Basic” to “Repetitive” and in the future it will shift from “Repetitive” to “Advanced,” as depicted below:

He argues that automation threatens tasks, not jobs: “Tasks of any job change over time.” But he acknowledges that if a task is repetitive, “get out of the way!” “Advanced” work, like jobs involving creative thinking and “emotional IQ,” is more immune to automation. In fact, he predicts automation will bring new paradoxes, including labor shortages.

BlackRock’s Andrew Ang provided another keynote address, entitled “Frontier of Factor Investing.” It was my first exposure to Andrew, but he attracted a large crowd at the conference with many champions about his former teachings at Columbia and his book, Asset Management: A Systematic Approach to Factor Investing. Nathan Vardi of Forbes recently profiled him in “The New Face of Active Investing” and Morningstar’s Adam McCullough interviewed him at the conference in “BlackRock: Factors With Economic Rationale Should Endure.”

Andrew started his talk with this statement: “Investing is harder than ever.” But as he presented, I could not help but think, especially given the other presentations from Wes and Joe, that traditional forms of active management … no, more precisely, any form of active management that can be distilled into a formula based on publicly available information is being commoditized. Those tasks are now automated by quants developing and implementing systematic strategies more pragmatically, more consistently, and more efficiently than ever before.