In March, we highlighted some notable funds that had received Lipper Fund Awards for their excellence over the past three years. A couple people wrote to note, correctly, that they’d received five-year awards and those were even cooler, despite the fact that I hadn’t mentioned them. 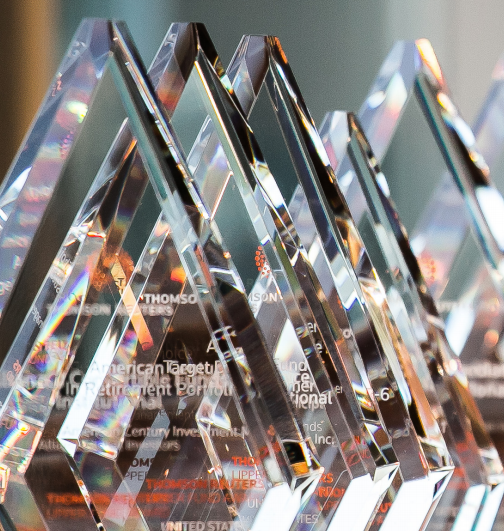 AQR Multi-Strategy Alternatives (ASANX) led the alternative multi-strategy group. I mention that in recognition of the fact that AQR seems remarkably successful across a range of such funds, none of which particularly welcome smaller investors.

Edgewood Growth topped the five year large-cap growth rankings while LSV Value Equity (LSVEX) was tops in large-cap value. Our profiles of them are too old to be worth linking for you, but we’ll check during April to see if we might offer updated profiles.

Broadly speaking, T. Rowe Price dominated the target-date retirement categories, in some cases winning the three-, five- and ten-year awards. TIAA-CREF made a strong showing, with Fidelity and Vanguard pretty much shut out.

And Oberweis International Opportunities (OBOIX) was the top international small- to mid-cap growth fund over the past 10 years.

I originally thought that PIMCO had updated the “glide path,” that is, the changes in their retirement funds’ asset allocation strategy, effective at the end of March, 2018.

It actually appears that they’re just updated the picture of the glide path, to the one above from the one below. 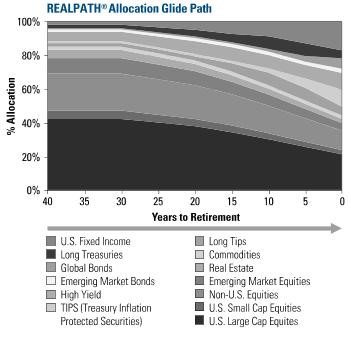 Hmmm … well, let’s look at the differences. (1) The new asset allocation glide path has the legend on the left, rather than underneath. And (2) the new glide path is higher res than the old one.

Especially in the face of increasingly unstable markets, many folks have been asking how much equity exposure they should have. PIMCO’s answer is, “it depends.” In particular it depends on how close you are to actually needing some of the money and how the markets are priced. Here’s the short version of their asset allocation guide.

For additional details on the whole “get your asset allocation right or else” thing, you might review the data from T. Rowe Price that we’ve periodically provided in our essays on a stock-light portfolio.

On March 30, 2018, Gator Focus Fund (GFFAX / GFFIX) redesignated its Investor shares as Institutional shares, and then dropped the minimum initial investment from $100,000 down to $5,000. The new institutional shares serve as a sort of universal share class for the fund, and do not impose 12b-1 fees. Nice people. $3 million fund. Disastrous performance.

Vanguard Wellington Fund (VWELX) has closed to all prospective financial advisory, institutional, and intermediary clients (other than clients who invest through a Vanguard brokerage account).

The former Collins Long/Short Credit Fund is now CrossingBridge Long/Short Credit Fund (CLCAX). The fund just received its first Morningstar rating, which placed it as a four-star fund in the long-short credit group. Notwithstanding, Morningstar’s new quantitative rating system (see this month’s “Morningstar Minute” article for details) places a negative rating on the fund for perceived weaknesses in its People, Parent and Price pillars. On the fund’s profile page, Morningstar shows 53 funds in its peer group, up from 50 at the end of 2017, but you get that number only by counting each share class (A, C, advisor, retirement, institutional and so on) of each fund as a separate fund. In reality, there are only 16 “distinct” funds in the group.

The Board of Trustees at GMO approved a change in the name of GMO U.S. Equity Allocation Series Fund (GMUEX) to GMO U.S. Equity Series Fund, but didn’t stipulate a date for the change. The fund’s investment minimums range from $10 million to $750 million, so relatively few of us will be waiting anxiously to learn the date.

After the close of the markets on April 6, 2018, the Guggenheim ETFs all become PowerShares ETFs. 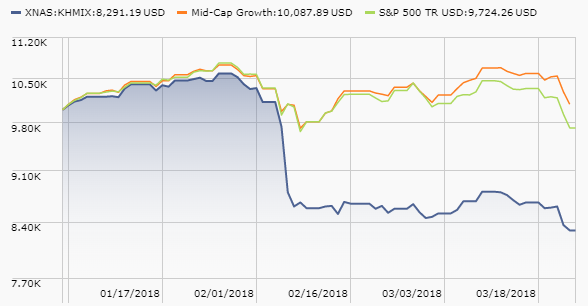 The advisor’s website is curiously silent on the collapse illustrated above. That, all by itself, seems a valid reason to avoid the fund.

Effective April 16, 2018, the name of the Sierra Strategic Income Fund (SSIZX) will be changed to Sierra Tactical Core Income Fund. Since “the investment objective, principal investment strategies and principal investment risks for the Fund have not changed,” we’re left to conclude that Sierra believes “strategic” is the same as “tactical” or, alternately, “strategic” is the same as “tactical core.”

Footnote 3 to the table entitled “Annual Fund Operating Expenses” of the Fund’s Prospectuses is deleted and replaced with the following:

AdvisorShares Meidell Tactical Advantage ETF(MATH) is expected “to cease operations, liquidate its assets, and distribute the liquidation proceeds” on April 6, 2018. I love the thoroughness of some of these “we’re killing it” announcements. A few include the “all references to the fund will be deleted from the prospectus and related documents,” but I am still waiting for “the managers’ images will be obscured, their belongings sold, salt poured deeply upon the places they trod and their names shall ne’er be spoken again.”

ALPS/Alerian MLP Infrastructure Index Fund (ALERX) will be closed and liquidated … with an effective date as determined by a committee of the Board of the Trust.”

The $3 million AMG Chicago Equity Partners Small Cap Value Fund (CESVX) has closed to new investment and will liquidate on May 18, 2018.

Amplify YieldShares Oil-Hedged MLP Income ETF (AMLX) will liquidate after the close of business on April 19, 2018.The fund has been around nine months and has lost about 25%.

The Trustees of Context Capital Funds have voted to liquidate and terminate Context Strategic Global Equity Fund (CGPGX) effective on or about March 29, 2018 which is to say, it’s gone already.

The Direxion iBillionaire Index ETF (IBLN) will close on April 6, 2018 and be liquidated within a week. At base, the ETF tried to invest in the same stocks that the 10 most successful billionaire investors or institutional investment managers invested in. Nice idea but the fund only outperformed the average large cap domestic equity fund by 100 bps over the course of three years, an amount insufficient to draw the attention of any billionaire investors, or millionaire investors or, judging from the AUM, even more thousandaire investors.

Fidelity is giving up the ghost on Fidelity Inflation-Protected Bond Fund (FINPX). The fund will be merged in Fidelity Inflation-Protected Bond Index Fund (FSIQX) on or about August 24, 2018. Neither fund is spectacular, but the index fund has nearly twice the assets at about half the cost which accounts for most of its slight performance advantage over FINPX. William Irving no longer serves as lead portfolio manager of the fund.

Hartford Global Equity Income Fund (HLEAX) is slated to merge into Hartford International Equity Fund (HDVAX) on or about June 25, 2018. The Global fund owns about $65 million in US stocks and is merging into a fund with just $70 million in assets; that implies a lot of liquidations and, potentially, a large tax bill for someone.

Janus Henderson Global Allocation Portfolio – Moderate (JMAPX) merges into Janus Henderson Balanced Portfolio (JABLX), hence out of existence, on or about the close of business on April 27, 2018

Johnson Growth Fund (JGRWX) is merging into the Johnson Equity Income Fund (JEQIX) on or about April 20, 2018.

What’s the rush? JPMorgan Multi-Cap Market Neutral Fund (OGNAX) liquidated on March 23, 2018. That date was moved up twice, from April 6 to March 29, then to March 23.

Lazard US Realty Income Portfolio (LRIOX) will, pending shareholder approval, merge into Lazard US Realty Equity Portfolio (LREOX) on or about June 29, 2018. The funds, between them, have $70 million in assets. Over the past two years, LREOX has had much stronger performance than LRIOX, but they did spend their first seven years neck-and-neck. They’re run by the same two managers, which raises the question of whether LREOX’s recent excellence represents brilliant management or just (temporarily) favorable market conditions.

Lord Abbett Emerging Markets Local Bond Fund (LEMAX) will liquidate and dissolve on or around April 19, 2018. (Fans of EM bond investing really owe it to themselves to look at Teresa Kong’s two funds, Matthews Asia Strategic Income and Matthews Asia Credit Opportunities. She, and they, are absolutely first-rate.)

Lord Abbett Multi-Asset Focused Growth Fund (LDSAX) will merge, at a not-yet-specified moment, into Lord Abbett Multi-Asset Growth Fund (LWSAX). Those affected by the move should note that LWSAX has a substantial bond component (17%) and about a third fewer international stocks than does the disappearing fund. That has translated to higher returns with higher volatility.

A proposal to merge Nuveen Concentrated Core Fund (NCADX) into Nuveen Large Cap Core Fund (NLACX) will be submitted to shareholders in May. The funds have the same managers, are the same age and have comparable expenses. Concentrated holds 20 stocks, Core holds 100. Core has higher returns and lower volatility but neither is particularly a star.

Nuveen Symphony High Yield Bond Fund (NSYAX) will be liquidated after the close of business on May 11, 2018. Solid fund, victim of the whims of the market, I suspect.

Huh? Putnam Investors launched in 1925 and has over $2 billion in assets, about three times the size of Multi-Cap Core. Statistically, the funds have nearly identical performance over the past five years though that seems like an awfully thin slice of data when you’re dealing with one fund that has a 93 year record. The correlation between the two is 99 and the statistical differences between the two are typically a tenth of a percent. Both have a four-star rating from Morningstar and have the same managers. The only consequential difference is that Investor tends to hold more large-cap names.

While they’re at it, Putnam is merging Putnam Capital Opportunities Fund (PCOAX) into Putnam Small Cap Growth Fund (PNSAX) and liquidating entirely Putnam Low Volatility Equity Fund on or about May 18, 2018.

Shelton European Growth & Income Fund (EUGIX) and Shelton Greater China Fund (SGCFX) are both fated to be eaten by Shelton International Select Equity Fund (SISLX). The two regional funds each has fewer than $10 million in assets.

TCW Focused Equities Fund (TGFVX) will liquidate on or about May 31, 2018. 2008 served as a turning point in the fund’s history; it performed excellently before the crash and miserably thereafter.

Pending shareholder approval, Thrivent Growth and Income Plus Fund (TEIAX) will merge into Thrivent Moderately Aggressive Allocation Fund (TMAAX) sometime this year, the filing was not particularly informative on the subject. The move is a good one for shareholders.

The Board of the Wasatch Funds Trust has decided to put Wasatch Long/Short Fund (FMLSX – who now remembers the 1st Source Monogram funds whose legacy lived in this ticker symbol?) out of its misery by merging it into Wasatch Global Value Fund (FMIEX – notice the odd coincidence in the ticker, this used to be 1st Source Monogram Income Equity Fund). Wasatch adopted both funds in 2008, assets in long/short popped from $100 million to $1.6 billion in three years, Wasatch replaced its 1st Source managers in 2013 and the fund promptly lost money in three of the next four calendar years. It’s now smaller than when Wasatch purchased it.