The fund pursues the reassuring objective of long-term total returns and capital preservation. Osterweis starts with a strategic allocation that’s 50% equities and 50% bonds. In bull markets, they can increase the equity exposure to as high as 75%. In bear markets, they can drop it to as low as 25%. Their argument is that “Over long periods of time, we believe a static balanced allocation of 50% equities and 50% fixed income has the potential to provide investors with returns rivaling an equity-only portfolio but with less principal risk, lower volatility, and greater income” achieved through the compounding of reasonable gains and the avoidance of major losses.

Both equity and debt are largely unconstrained, that is, the managers can buy pretty much anything, anywhere. That means that the fixed-income portfolio might at one point contain a large exposure to high-yield securities and, at another, to Treasuries. The equity portfolio is composed of companies with sustainable competitive advantages, particularly those likely to deliver consistent dividend growth, whose stocks are undervalued or out-of-favor.

Because they don’t like playing by other people’s rules, the Osterweis team does not automatically favor intermediate-term, investment-grade bonds in the portfolio.

Since 2017, the fund’s equity exposure has ranged from about 60-70%. They currently hold 40 stocks, the vast majority of which Morningstar recognizes as having a defensible economic “moat.”

Osterweis Capital Management. Osterweis Capital Management was founded in 1983 by John Osterweis to manage money for high-net-worth individuals, foundations, and endowments. The firm has 58 employees and $7.7 billion in assets under management in 2021. They manage both individually managed portfolios and five mutual funds. Osterweis once managed hedge funds but concluded that such vehicles served their investors poorly and so wound them down in 2012. The firm is privately held, mostly by its employees.

The fund is managed by a team of five portfolio managers.  Founder John Osterweis and co-CIO Carl Kaufman remain from the team of eight portfolio managers that launched the fund. Eddy Vataru joined Osterweis in 2016 and is an investment-grade fixed-income specialist. Larry Cordisco and Jim Callinan are both equity guys with distinguished careers at other shops. Mr. Cordisco was a co-manager for Meridian Contrarian Fund (2012-18) and, for almost a decade before that, one of the fund’s equity analysts. Mr. Callinan has one of the longest and most distinguished records of any active small growth manager. He was a cover-story manager when he was at Putnam OTC Emerging Growth Fund (1994-96), then Morningstar domestic equity Manager of the Year during his years with Robertson Stephens Emerging Growth and its RS-branded successor funds (1996-2010).

For many of us, there is a time in life when investing is a game and we approach it with all of the intensity and seriousness of fantasy football. A little shibu inu today along with a slice of the VIX, some cloud computing tomorrow plus three irresistible GameStop trades. Maybe short Cathie Woods and long Elon Musk next week and … hey, what’s this “fractional ownership of fine art” thing about?

Osterweis Growth & Income is a fund for people who’ve gotten over “the stock market as a game” fantasy and want to get on with their lives while entrusting their money to managers who don’t flirt with NFTs. Its aim is to be a more flexible alternative to the rigid 60% large caps / 40% investment-grade bonds that doesn’t lose sight of the fact that you’ve entrusted part of your financial future to them. They take that trust very seriously.

Why consider Osterweis Growth and Income?

There are two reasons. First, Osterweis makes sense in an uncertain world. Osterweis Growth & Income is essentially the marriage of the flagship Osterweis Fund (OSTFX) and Osterweis Strategic Income (OSTIX) with a twist. OSTFX is primarily a stock fund, but the managers have the freedom to move decisively into bonds and cash if need be. In the last 10 years, the fund’s lowest stock allocation was 60% and its highest was 96%, but it tends to have a neutral position in the upper-80s. Management has used that flexibility to deliver solid long-term returns (13% over the past decade) with 13% less volatility than the stock market’s. The equity selection in the Growth and Income Fund is born from the same investment philosophy and process as the Osterweis Fund, but with a greater emphasis on stocks that can deliver long-term dividend growth. Mr. Cordisco describes it as “quality at a reasonable price, with a dividend growth focus.” Their hope is that they select corporations whose dividends grow steadily by the high single digits. Osterweis Strategic Income (OSTIX) plays the same game within the bond universe, moving between bonds, convertibles and loans, investment grade and junk, domestic and dollar-denominated foreign. This plays hob with its long-term rankings at Morningstar, which has placed it in three very different categories (convertibles, multi-sector income, and high-yield bonds) over the past 12 years but now benchmarks all of its trailing returns as if it had been a high-yield bond fund all along.

Second, Osterweis Growth & Income has done a remarkably good job for a long while. The managers have resumes that date back 20 to almost 40 years. They’ve managed through a vast array of economic conditions and market states. They come across as smart, thoughtful, and disciplined, which has allowed them to succeed across market cycles and which gives investors some confidence that they can continue doing it.

Below is a quick snapshot of the judgments reflected by the three major fund analysts: MFO, Morningstar, and Lipper. In each of the first eight rows, funds are rated on a five-point scale with five being the highest. The last two rows are text-based. 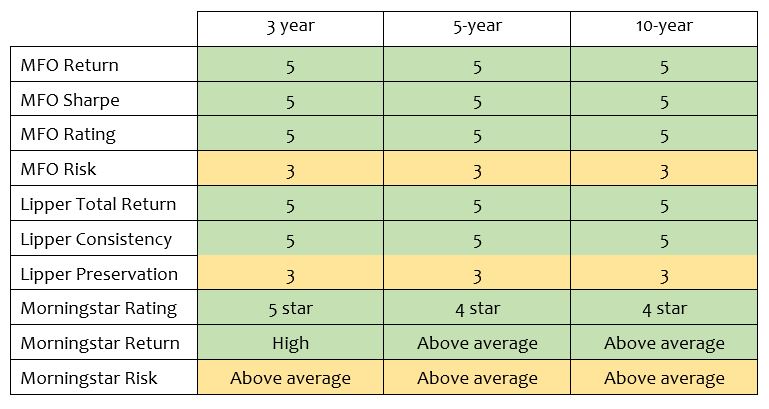 The record reveals a consistent and important pattern. Osterweis Growth and Income is consistently a top-tier fund, in both its Morningstar and Lipper peer groups, dating back to its launch 11 years ago. It produces strong absolute returns and top-tier risk-adjusted returns across all three periods.

At the same time, it is not a timid fund. The managers seek to accept rational risk, often by embracing investments at precisely the moment that other investors flee. That creates long-term opportunities, though at the price of short-term volatility.

The 0.94% ratio (as of the most recent prospectus) has been dropping steadily and is at the lower end for an active allocation fund, strikingly so for a small one.

If you believe that the market, like the global climate, seems to be increasingly unstable and inhospitable, it might make sense to invest with folks who are neither dogmatic nor still learning on the job. The team at Osterweis qualifies. “The opportunity set in fixed income is,” Mr. Cordisco notes, “not as robust.” A positive view of the US economy (“no major headwinds, no energy shortages, no mortgage crisis”) had led the team to cautiously overweight equities while at the same time recognizing that investors “should probably think about playing a little more defense. March/April 2020 was time for aggression. It’s a bit too manic now.” They’re finding “a lot of opportunities underneath the indices” in quality firms (think “Visa”) that have gotten pummeled. Still, they’re vigilant of “pockets of mania.”

It is easy to dismiss Osterweis Growth and Income Fund because it refuses to play by other people’s rules; it rejects the formulaic 60/40 split, it refuses to maintain a blind commitment to investment-grade bonds, its stock sector-, size- and country-weightings are all uncommon. Because rating systems value herd-like behavior and stolid consistency, independent funds may sometimes look bad. And yet, over time, Osterweis gets it right far more often than not. Osterweis Strategic Income has the highest Sharpe ratio in its Lipper peer group over the past 15 years, Growth & Income has the seventh-highest in its peer group since inception and Osterweis Fund is in the top 20% of its Lipper peer group over the past 15 years. The fund’s fixed-income portfolio, embodied by the Osterweis Strategic Income Fund, has managed a negative down-market capture over the past 15 years; that is, it rises when the bond market falls, then rises some more when the bond market rises. That’s doing business differently … and well. Given reasonable expenses, outstanding management, and a long, solid track record, Osterweis Growth and Income warrants a place on any grown-up investor’s due-diligence shortlist.

Osterweis Growth & Income Fund, whose homepage links to their quarterly webinar and most recent video interviews.  Folks trying to gain a broader understanding of the firm’s approach might be interesting in their most recent investment outlook or the Insights page to read perspectives from all of their portfolio management teams.