On the continuing theme of “rules are for the little people,” the Wall Street Journal reports

Sens. Pat Toomey (R., Pa.) and Cynthia Lummis (R., Wyo.) sit on the powerful Senate Banking Committee and have been advocates for a light government touch toward the growing—and largely unchecked—cryptocurrency market.

They also own cryptocurrency assets. Ms. Lummis’s roughly $250,000 of bitcoin makes her the most heavily invested U.S. lawmaker in the digital asset. Mr. Toomey has smaller holdings in crypto-related investment vehicles. Together they are the only two senators with such investments… (“Only Two Senators Own Crypto Assets. Both Are Shaping the Industry’s Rules,” 12/20/21).

To be clear, such investments do not violate any laws or the Senate’s own rules, as long as the senators disclose them. At yet, as with our earlier reports on dozens of members of Congress failing to disclose their stock trading and members of the Federal Reserve’s Board of Governors playing the bond market, it’s hard to imagine that having a vested financial interest in the outcome of your deliberations makes it easier to be clear-eyed and impartial.

Cohanzick will become the controlling shareholder of the new company, with the prospect of inheriting some useful tax losses to carry forward and gaining from the appreciation of the new company’s stock. They will, in turn, be able to leverage their logistical abilities to strengthen Willow Oak. From an outside investor’s perspective, it’s pretty much a non-event.

Thanks, as ever, to The Shadow for a rich collection of leads!

FPA launched its first ETF, FPA Global Equity ETF, on December 17, 2021. Stephen Romick and his team lead the fund, and it uses the Contrarian Value Equity strategy that’s also embodied in FPA Crescent. The ETF charges 0.49% and, unlike Crescent, is committed to being more-or-less fully invested all the time.

BlackRock has an owie. Assets in BlackRock’s iShares ESG MSCI EM Leaders ETF (LDEM) lost 91% of its investments in the days just before Christmas (Sydney Maki, A 91% asset plunge hits a BlackRock fund of sustainable EM stocks, 12/29/2021). In case you’re wondering what that might look like on your Bloomberg terminal: 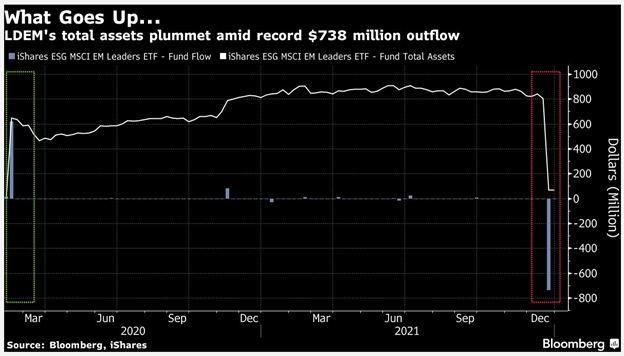 The fund invests in mid- to large-cap, ESG-screened EM stocks. It’s dirt cheap (16 bps) and has posted index-like performance since inception. It hasn’t been making money (6% total over two years, -1.8% in 2021), but neither has its asset class. Morningstar warns that it carries more stock-specific risk (28% of the portfolio is in its top 10 names) and more risk related to substantial investments in state-owned enterprises than most. The best explanation for the collapse is the withdrawal of a huge pension fund in Finland, which provided much of the seed capital for the fund at launch.

Speaking of owies. Despite a multitude of warnings, here at MFO, at Morningstar, and elsewhere, investors absolutely poured money into the ARKK Innovation ETF in December 2020 and January 2021. The warnings were pretty straightforward: (1) you can’t buy last year’s returns, so don’t let those sway your decisions, (2) ARK was wildly understaffed and inundated (net $20 billion in 2020) with dumb money, and (3) manager Cathy Woods has a consistent long-term boom-and-crash track record, with the boom having just occurred.

Good news for investors committing their money on December 1st: you’re only down 13% since then. Less good news for folks who made ARKK one of their New Years 2020 resolutions: you’re down 24%. Folks who gave shares as a Valentine’s Day present? They’re underwater by 39%. On the bright side, at least they didn’t spend the money on a near-suicidal gesture, like:

Conestoga Capital Advisors has converted a relatively young hedge fund into a micro-cap mutual fund, Conestoga Micro Cap Fund. The LP averaged 38.42% per year in 2019-2020, substantially all of which was generated by 2020’s 75% return. The fund will be managed by David Neiderer and Joseph F. Monahan. Mr. Monahan co-manages their four-star Conestoga Small Cap (CCASX) and SMid Cap (CCSMX) funds. Mr. Neiderer is an equity analyst on both funds. The expense ratio for Investor shares is 1.50%, and the minimum initial investment is $2,500.

The only ones we’ve spotted seem to be precursors to liquidation rather than celebrations of success and unmanageable affluence.

As of February 23, 2022, First Trust CEF Income Opportunity ETF drops the “CEF” bit and becomes First Trust Income Opportunities ETF. Currently, the fund invests in closed-end funds but plans to add ETFs as a second option, hence the broader name. It’s been a bit streaky, but it’s not clear that adding more options is the answer.

On the theme of codifying stupid, immemorable fund names, the Litman Gregory Masters Funds, which became the uninspired PartnerSelect Funds, have now become the unpronounceable and inexplicable iMGP Funds.

On March 1, 2022, iShares Global Green Bond ETF becomes iShares USD Green Bond ETF. My best understanding is that the fund moves from a dollar-hedged global bond portfolio to a dollar-denominated one. Subsequently, the expense ratio drops by 5 bps.

Prudential Financial took a half-step back from their embrace of unexplained acronyms, replacing QMA with Quant Solutions in the names of a dozen funds and ETFs. So, for example, PGIM QMA International Equity Fund becomes PGIM Quant Solutions International Equity Fund. Now, if they’d do a quick gut check and dump PGIM in favor of Prudential, it would be a win all the way around.

The Board of Directors has approved a plan of liquidation for the AC Alternatives Market Neutral Value Fund. Under the plan, the liquidation date of the fund will be March 11, 2022. Over ten years, the fund has returned 0.7% annually, making it slightly less profitable than a lemonade stand, though slightly more profitable than the average market-neutral fund. While money poured in in late 2015 and 2016, the fund has been leaking assets for years and stands at just over $35 million.

Callin’ off the wedding: “At a meeting held on December 16, 2021, the Board of Trustees of Allspring Funds Trust unanimously approved the termination of the Amended and Restated Agreement and Plan of Reorganization with respect to the merger of each Allspring Target Date Fund into a corresponding Allspring Dynamic Target Date Fund and the abandonment of the Reorganizations.”

On December 17, 2021, the minuscule, two-star AXS Aspect Core Diversified Strategy Fund was swallowed by its tiny, three-star sibling AXS Chesapeake Strategy Fund. The funds’ five managers have, collectively, zero invested in either fund. You might take that as their recommendation.

On December 10, 2021, the BMO – originally, Bank of Montreal – funds were either merged into comparable Columbia funds or were simply rebranded as Columbia’s.

BNY Mellon Ultra Short Income Fund was liquidated on December 21, 2021. If you have a BNY Mellon adviser, they should have already told you that your balance was shifted to the Dreyfus Government Cash Management Fund.

On December 15, 2021, the Boston Partners Global Equity Advantage Fund was liquidated after 2.5 years (it was launched on my birthday in 2019, woohoo!), presumably for mediocre performance and mediocre asset gathering.

On February 22, 2021, Cavanal Hill Active Core Fund will be liquidated.

Effective December 7, 2021, FS Long/Short Equity Fund was hard-closed. While a liquidation was not announced, a $4.5 million dollar fund with an atrocious record (and no inside ownership) is not likely to be closing in order to stanch the tidal wave of new money.

On or about February 11, 2022, Goldman Sachs Alternative Premia Fund takes a dirt nap. The decision occurred “after careful consideration of a number of factors,” none of which are explained in the death notice. I’m guessing that the tendency to generate long-term returns under 1% per year and the subsequent reluctance of investors to negative real returns were factors.

Here’s one for fans of Nicholas Cage movies and dark conspiracies in general. The tiny, five-star John Hancock Retirement Income 2040 Fund is slated to be liquidated in spring. Here’s the official explanation:

continuation of the fund is not in the best interests of the fund or its shareholders as a result of factors or events adversely affecting the fund’s ability to conduct its business and operations in an economically viable manner. As of the close of business on or about April 22, 2022, there are not expected to be any shareholders in the fund, and the fund will be liquidated on such date.

“There are not expected to be any shareholders.” If I owned shares now, I think I’d be worried about what Hancock knows that I don’t.

Effective December 27, 2021, Muzinich High Income Floating Rate Fund closed to new purchases, whether from existing or new investors. The fund has faithfully tracked the Credit Suisse Leveraged Loan Index since inception but has drawn just $33 million in assets. The inference is that the closure precedes a death notice, though that’s not confirmed.

VanEck NDR Managed Allocation Fund will be disallocated and dissolved on or about January 19, 2022.