Justice Potter Stewart’s most famous line is the one that he most regretted:

I shall not today attempt further to define the kinds of material I understand to be embraced within that shorthand description [“hard-core pornography”], and perhaps I could never succeed in intelligibly doing so. But I know it when I see it, and the motion picture involved in this case is not that. Concurring Opinion, Jacobellis v. Ohio, 378 U.S. 184 @ 197 (1964)

In 1981 he lamented “having said what I said about obscenity—that’s going to be on my tombstone.”

Many investors have the same difficulty with risk that Justice Stewart had with “hard-core pornography,” they are not quite able to define it though they’re pretty sure they know it when they see it. Given that we seem to have entered a period when risk is going to be on a lot of minds, it’s important to understand what it actually is in order to avoid succumbing to it. In the next couple of pages I would like to do four things:

Like many people, as a child, what I did with the money that I didn’t spend immediately was deposit it into a savings account. It’s easy for children to understand a simplified idea of safety. To use ten-dollar words, bank deposits have no risk of nominal loss. Back then, when banks paid what looked like real money, one even got growth at least in nominal (not inflation-adjusted) dollars. 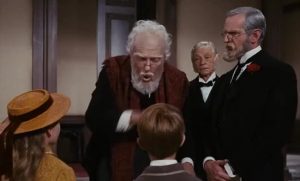 As the banker, the elder Mr. Dawes (Dick Van Dyke), sang in Mary Poppins: “If you invest your tuppence wisely in the bank, safe and sound. Soon that tuppence safely invested in the bank will compound ….”

As investors, we all know that investing entails risk. Whatever that means. Yet the nagging aversion to nominal loss remains. Reviewing my old records of how I invested in my first employer’s company retirement plan, I find that even after several years, about half of my money was in a stable value portfolio.

Meanwhile, coworkers were investing in stocks. They would say they could make money throwing darts at a stock page. And at the time, that was largely true. Still, my reaction was: invest in stocks, are you crazy? It takes a while to get accustomed to risk.

So what is this risk that we’re all averse to? It’s easy to say that the objective of investing is never to lose money, to make a lot of money, and to do that smoothly. It’s also easy to say “Bernie Madoff.” That’s just not the real world. More than that, these objectives hint at risk, but they don’t define it.

A good definition of risk was given by Warren Buffett in his 2011 shareholder letter: “The riskiness of an investment is … measured … by the probability – the reasoned probability – of that investment causing its owner a loss of purchasing-power over his contemplated holding period.” One might refine or modify this slightly to say that risk is the probability of not having enough money available when it is needed (or desired).

This refinement helps in a couple of ways. It incorporates a sense of why we invest. Not losing money is nice, but if we don’t make enough to cover our expenses, that’s still a problem. And it implicitly absorbs problems like having to sell at the wrong time (e.g., sequence of return risk). Selling at a bad time is part of this view of risk because one might not be able to handle the next expense, or the next. By thinking about how one meets spending needs, rather than just about whether a particular investment is profitable (in real terms), one works with a broader concept of risk.

With this idea of risk in mind, if one doesn’t need to draw on money for more than a decade, invest in equities. A diversified portfolio is, at least based on many decades of history, nearly certain to be worth more when that money is finally needed. The greater growth of equities reduces the risk of not having the money needed when investing over long horizons.

What about money that might be needed in less than a decade? It’s over these shorter timeframes that metrics like volatility, maximum drawdown, and time to recovery become significant. In and of themselves, they are not measures of risk. What they do is help investors think about the risk of not having enough money when needed – the likelihood of falling short and the magnitude of the shortfall.

When one holds an investment for a given period of time, what matters is how much one paid for the investment and how much it is worth in the end. What happens in between doesn’t matter. Sure, there’s the matter of whether one can sleep at night with wild gyrations. There’s also the possibility that an investment simply goes south. One should be continually reviewing one’s holdings for unexpected changes. But if the reason one chose the investment hasn’t changed, the zigs and zags along the way are objectively rather unimportant.

While volatility isn’t risk, it still matters. With bad luck, one may wind up buying high (market up) and selling low (market down). The greater the volatility, the more this bad luck may be amplified. A tame investment might be down 5% from its peak when one needs to cash out, while a highly volatile investment might be down 25% at that same moment.

Over longer investment horizons, the greater returns that are associated with higher volatility will tend to more than make up for this worst-case possibility. But over shorter periods of time, volatility at the endpoints (buying and selling) can swamp average expected returns. Because of this, investors tend to use less volatile investments (or a glide path approach) for shorter-term investing.

This fits with the concept of risk as having money at the right time. Investing in less volatile investments over the short term reduces the likelihood of a big loss and thus not having enough money when it is needed. There’s a tradeoff here. One is forfeiting expected gain in exchange for lower risk. Instead of investing in something which, seven times out of ten, leaves one better off, one invests in the “almost sure thing” in order to reduce the risk of a shortfall. In effect, one is buying insurance.

Broadly speaking, insurance is paying to shift risk to ensure that we have money when needed. Or at least to reduce the probability that the money won’t be there. How much we insure depends on how much it will hurt if it isn’t there. As an example, we buy health insurance, even as we hope never to be afflicted by something costing six, seven figures, or more to treat. But we may not insure for 100%. It’s often not worth the extra cost to us.

Unlike individual investors, mutual funds have no money needs that they are targeting. They are designed to be perpetual vehicles. So for mutual funds, we can introduce the concept of a “risk profile.” How much do they expect to gain (or lose) under what conditions? As with individual investors, there is a tradeoff between how much they expect to gain long term and the probabilities of falling short by how much.

With “vanilla” funds, your typical stock, bond, or hybrid fund, the risk profiles are pretty straightforward. People understand how stocks and bonds broadly speaking behave. One can think of an allocation fund as buying insurance to the extent that it allocates money to bonds as opposed to stocks.

Where things get interesting is where funds use derivatives or other techniques to alter their risk profiles. Sometimes what they do is straightforward, and investors can gauge how that investment affects their personal risk – the likelihood of being unable to satisfy cash needs. But often, “elegant” funds are relatively opaque.

Derivatives are used to shift the risks (alter the consequences) of different events. “Hedging” is often mentioned, presumably involving the use of a derivative as insurance to protect against something bad happening. Unlike simple insurance, this risk-shifting may have the effect of moving risk around. It can concentrate risk so that most, perhaps the vast majority of the time, things work well and the fund benefits. But on that rare occasion when things don’t work well, the result can be catastrophic.

A consequence is that funds may “work until they don’t.” A fund may suddenly drop through the floor while doing exactly what it is designed to do. Unfortunately, standard techniques, like checking correlation with other funds, do not necessarily provide much insight into that design since most of the time, the fund behaves “normally.” Until it doesn’t.

Mortgage-backed securities (MBSs) strike me as something that can have this type of behavior. Though I may be nearly alone with my concerns here. Mortgage holders can prepay their mortgages. That’s effectively a call option. This causes MBSs to behave differently in some situations. They are different even from conventional callable bonds, which are typically called if and only if market rates fall below coupon rates.

Generally, MBSs pay more than other debt of similar quality and maturity. They have higher yields because of a “risk premium.” They have extension risk – the risk that mortgage holders will tend not to prepay their mortgages as expected because rates are rising. So just as bond prices are going down due to rising rates, MBS prices will fall faster than other bonds because their effective maturities are growing. The flip side is prepayment risk – that mortgage holders will prepay their mortgages faster than expected (e.g., refinance) because rates are going down. Likewise, this is not good for MBS investors.

That risk premium pays off until it doesn’t. If interest rates change too quickly, these bonds can get battered.

All the mathematically precise figures that one can look up for a fund – volatility, drawdown, and the rest – may not actually be risk, but they still inform us. They give a sense of the risk profile of a fund. We can use that to estimate the chances of meeting our goals, of having enough money for expenses as they are incurred. The more “elegant” a fund is, the more it uses sophisticated techniques to manage (alter) its risk profile, the more one needs to look past the basic metrics and understand the fund in-depth.