Many people are heartsick after watching the stock market’s gyrations. Some of the people who are queasiest are the young investors who thought, “this is so easy!” as they booked a year’s worth of profit in a single morning, trading meme stocks or NFTs or cryptos or any of a dozen other securities they could barely explain, much less analyze. More will find their moment of reckoning as they confront enormous capital gains tax bills, and sadly reduced portfolios.

I am not criticizing them because, once upon a time, I was them. I would like to share a bit of biography that might help you …and them … and me, manage in the turbulence to come.

The month was May, and the year was 2000. For the first time in my life, I had both the money and the opportunity to get involved in the stock market.

Let me start with the money. I came to America in 1994 from India, sight unseen, for an undergraduate degree at Indiana University. I had exactly one semester’s worth of tuition money, a lot of debt, and family expectations. I had walked away from a full scholarship in Singapore and was “all in” on America. I graduated from IU in three years and then worked at Merrill Lynch in New York from 1997-2000.

The stock market was red hot in the second half of the 1990s. Fellow colleagues, friends I knew from IU, people I had met in New York, were all involved in stocks. I had no money in the stock market. During that time, I was paying down debts in India and student loans from IU. For the first time, around 1999, I was able to save some money, and my attention drifted toward the stock market. But the opportunity to trade was still limited.

I had no family in the US, no background in investment, and no understanding of how the American economy worked. The only difference in my mind from one company to another was the stock name and ticker. In those days, trading required calling an actual broker. I mostly avoided trading because I did not want to sound foolish by buying or selling based on rumors and news stories. Then in May 2000, I joined Goldman Sachs as a derivatives trader. There, things were different. Goldman had an online trading platform. That meant I could trade any stock, and no one would know that I knew nothing. That made me foolishly courageous to trade excessively, and of course, I learnt my lesson the hard way.

The Nasdaq, over the next few years, went on to become the Nas-dawg, and I managed to lose close to fifty thousand dollars! A lot of people lost a lot of money, but I took it very personally. Just a few years earlier, I was wearing second-hand clothes, ironing my own shirts, and walking from the train station in Jersey City to my apartment at two in the night to avoid spending money on a cab. How could I get carried away and risk so much money in the market?

The loss turned me off stocks for personal trading. But I also wanted to learn how to get it right and not waste the loss. At Goldman Sachs, I was surrounded by the best and brightest minds in finance. KK was a senior trader from Tokyo who had been asked to come to New York. Being no fool, he never participated in the stock market bubble. Each time I got overly excited about picking some stock or timing the market, he would only smile and brush away my suggestion. One day, I asked him why he always smiled but never listened to my suggestions. That day he didn’t smile.

KK-san told me he had heard all my stock market babble for months, and he had only one question for me: “What is your edge?”

“What do you mean edge? Isn’t it our job to speculate?” I naively asked.

“Edge,” said KK-san, slowly, “means what do you know about the stock that you are pitching, or about timing the market that gives you conviction? Edge means what do you know that no one else does? Edge means what is your understanding of risk and rewards and the probabilities attached with the distribution of risk and reward, and how is that superior to everyone else’s? A trader’s job is not to speculate. A good trader makes informed risk-reward decisions. A great trader makes those decisions in a big way.”

“How do I get Edge?” I asked attentively. KK-san once again put on his smile and went back to work.

Almost immediately, I understood why I lost a bundle in the stock market. I never had any EDGE. I was simply trading based on rumors and price patterns and whatever garbage news stories everyone else was parroting. Thenceforth, I immersed myself, mind and body, in finding Edge in the markets. I learnt the science and art of options and derivatives trading inside out, first from KK-san, then from reading lots of books, and finally becoming my own teacher through hard work. Knowing when I didn’t have edge made me choose my words carefully when I spoke to others. Instead of talking, I listened, and the edge started coming. The dots started connecting.

Traders weren’t expected to work evenings and weekends, but I started staying late at work and going into work almost every Sunday afternoon. I learnt a lot from building and running hundreds of fundamental and technical reports on my derivatives positions to calibrate the risks versus rewards available in the market. 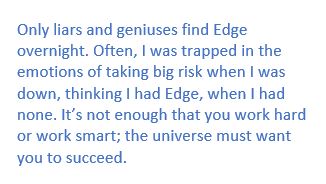 Was it easy to find Edge? Never, and not by a million miles. Only liars and geniuses find Edge overnight. Often, I was trapped in the emotions of taking a big risk when I was down, thinking I had Edge when I had none. The market was never friendly. And many other times, I was sure I had Edge, but the market did not support my judgment. It’s not enough that you work hard or work smart; the universe must want you to succeed. But every year, there was some progress.

Did Edge always bring results? Far from it. Despite having the correct positions, the market is notorious for penalizing traders and testing convictions. There were nights I went home and went straight to sleep. The losses were gut-wrenching. Does having Edge mean I became George Soros or Warren Buffett? No, because there is a certain talent, drive, and ambition, maybe intelligence required, maybe luck and wisdom, that I did not have. Having Edge only means you can do one or a few things well and about as well as the universe allows you to do. But you must knock hard on the Universe’s door and ask for the chance.

I often wonder what would have happened if I had ignored KK-san that day. I know so many other fellow derivative traders from that time who didn’t think it was necessary to get Edge, who continued trading based on guts and instinct rather than finding deep-rooted conviction through hard work and research. They mostly drifted away. On the flip side, I have also seen the people in markets and captains of industry who bring with them wisdom, hyper consciousness, a bold vision, ambition, aggressiveness, humility, and confidence, and they get the fruits they deserve but only after they have been tested. All our modern-day heroes clearly have, or had, Edge in what they are doing.

The GameStop episode is a wake-up call for those without Edge.

One year in the life of GameStop stock

If you think about the winners, they were in early, and they had done the research. They knew enough of the fundamentals and had focused enough on the technical shorts to understand why the stock could have a lopsided outcome. They had some Edge.

Who didn’t have Edge? The hedge funds that were shorting the stock and were too confident of their fundamental analysis over the technical positioning. Who else didn’t have Edge? The me-too traders who bought the stock high and are still nursing the losses. Edge usually defines who loses and who wins. If one truly accepts and believes that Edge matters, then one needs to decide if they have Edge before diving into the next wave of speculative stock trading.

We know we live in a winner take all world. To be a winner, first, we must define which world we are competing in. And we must know who else is competing. We must bring something to that world that is unique so that people will want to come listen to us. In the process, maybe they will say something wise that they have learnt. When others talk, we should listen because when we listen carefully, we might pick up some EDGE.

For most investors, our most reliable Edge lies in a series of virtues that seem painfully out of fashion these days: patience, humility, and diligence. Patience reflects the understanding that we will be holding for years the stuff that others buy and sell a dozen times a day. Humility discourages us from making “big bets” when we’re better off spreading out risks and tempering our expectations. Diligence is the willingness to study, learn, grow and adapt. It teaches us the Art of Adulthood: following our minds rather than our impulses.

What is your Edge?