Closed-end funds? Hard to remember that they’re alive and well. That slice of the industry originated in the 1890s and they’re sort of an open-end mutual/active ETF hybrid. They trade throughout the day on secondary exchanges like ETFs, which means that their price per share can diverge dramatically from their net asset value per share. During the financial crisis, for example, a lot of CEF categories traded at double-digit discounts to their NAV. What does that mean? It means that the manager owned, say, $100 worth of stocks and you could buy those $100 for $85 because owners were panicked and willing to give money away. Weird. There are 554 closed-end funds in operation with about a quarter trillion in assets. Here’s a snapshot of the highest YTD returns, through 10/31/2019. 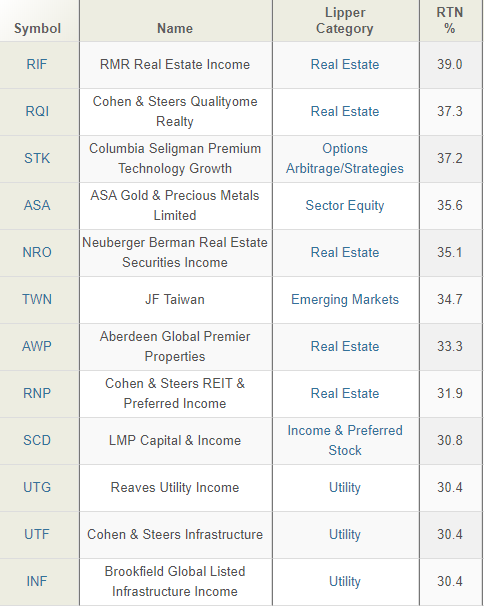 Never mind! The Cannabis Growth Fund (CANNX) had announced a long series of changes: conversion of Institutional shares to Investor ones, liquidation of the Institutional share class, termination of the 12(b)1 plan and a reduction in the e.r. for Investor shares. On November 13, they admitted that they had their fingers crossed when they said they were going to do all that stuff. The plan is now to do none of it. 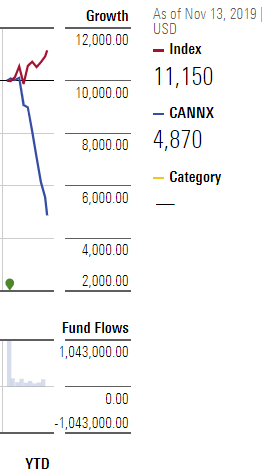 On November 14, 2019, the FundX Investment Trust Board of Trustees approved a change in the strategy of the FundX Sustainable Impact Fund (SRIFX) to align with Morningstar’s ESG/sustainability methodology. (Talk about the tail-wagging dog.)

Gator Financial Fund (GFFIX, formerly Gator Focus) just added a new Principal Risk of Investing, viz Large Shareholder Risk. Curious about what might have triggered the addition, I went to the fund’s most recent SAI which shows that just three guys, two sharing the same surname, own 67% of the fund’s shares. One of those three accounts for nearly half of the tiny fund’s shares.

Effective December 13, 2019, the minimum initial investment for Class I shares of Aegis Value (AVALX) is being lowered from $1 million to $10,000 for non-IRA accounts and $5,000 for IRA accounts. They’re simultaneously getting rid of the low-load, low minimum “A” shares. It’s a fascinating fund: Scott Barbee has been managing it since 1998, it’s almost purely microcaps (75%), it has about the highest active share possible (99.7) and periodically explodes:

Effective as of November 1, 2019, CrossingBridge Advisors reduced the operating expense limit on CrossingBridge Low Duration High Yield Fund (CBVLX) by 0.10% so to not exceed 0.80%.

Vanguard Alternative Strategies Fund (VASFX) has reduced its minimum investment from $250,000 to $50,000 but appears open only to clients of certain financial advisors. The Bogleheads are, alternately, disappointed by its limited availability and irked by a change in its investment objective.

Closings and other inconveniences

In an unusual and seemingly aggressive move, Westwood has opted to increase the minimum initial investment on institutional class shares of Westwood SMidCap Fund, SmallCap Fund, Strategic Convertibles Fund, and Flexible Income Fund (WFLEX) from the current $5,000 t0 $100,000. The difference is small, but the decision is odd.

The Aptus Behavioral Momentum ETF (BEMO) was very bad at what it did, trailing 100% of its peers. For visual learners, there appears to have been an unmanaged drawdown that looked like

They’re the blue line. Fortunately, it’s not doing Behavioral Momentum anymore. With the change of name, objective, strategy, status (from passive to active) and enumerated risks, it’s now Aptus Drawdown Managed Equity ETF (ADME). May all their drawdowns be managed ones.

Cambria Core ETF (CCOR) is on its way to a new home, the Listed Funds Trust. David Pursell, one of the CCOR’s two managers, is leaving Cambria. (As you might imagine, no reason has been given.) to form Core Alternatives LLC. Under the proposed reorganization, sometime in early 2020 Cambria Core will become the Core Alternatives ETF and Mebane Faber will no longer serve as a co-manager for the fund. So far the $100 million fund has had one great year (2018, up 4.6%, top 3% of its options-based fund peer group) and one horrible one (2019, up 3.8%, bottom 8% of its peer group). At base, it dodged its peer group’s horrendous crash at the end of 2018 and subsequent ferocious rebound. Measured since inception, the fund has been good but not great.

Just a bit later, on January 31, 2020, Highland Long/Short Equity Fund (HEOZX) will merge into Highland Merger Arbitrage Fund (HMEZX). The explanation is refreshingly straightforward: the funds have the same managers but Merger Arbitrage is working better and the merger will allow them to drop expenses a bit. We ran an analysis of the funds’ rolling 12-month averages and a correlation matrix. Merger averages 6% over any given 12-month period while Long/Short clocks in at 3.6% and, measured by the worst 12-month performance, the downside on Long/Short (-9.5%) is far greater than the downside of Merger (-0.1%). The funds don’t have much similarity (R-squared of .26) but Merger is the better diversifier and is far steadier, so it looks to be a good development.

Effective December 28, 2019, the Tortoise Select Opportunity Fund (TOPTX) will be renamed the Tortoise Energy Evolution Fund. The “evolution” in the title means “investing in companies in the lower-carbon / zero-space business.” That’s about 180 degrees from its current portfolio which is filled with oil companies which implies a near-complete liquidation of the portfolio and potentially large capital gains bills.

Sort of a kinder, gentler take on vice. The prospectus notes that they target “aerospace and defense industries, casinos and gaming facilities, manufacturers of cigarettes and brewers, distillers, vintners and producers of other alcoholic beverages.” The argument in their favor is that such industries have high barriers to entry, low economic sensitivity and customers whose loyalty verges on, well, addiction. The argument against it is that this portfolio, through its various renaming and leanings, trails 69-98% of its over various trailing periods from 3 – 15 years.

In a sort of cautionary tale, there’s a move afoot to boot Rampart Investment Management from the Virtus Rampart Alternatives Diversifier Fund (PDPAX). The hang-up is that the fund’s rules were written in a way that requires formal shareholder approval for such hirings and firings. The risk isn’t that shareholders will disapprove (which happens rarely), it’s that they won’t get around to vote (which happens a lot). So the shareholders are meetings on January 14 to bring Duff & Phelps onboard, change the fund’s name to Virtus Duff & Phelps Real Asset Fund and change the rules to let the Board handle hiring and firing.

Effective November 22, 2019, the Trillium P21 Global Equity Fund (PORTX) became Trillium ESG Global Equity Fund and boldly changed its objective from “capital growth” to “capital appreciation.” An article at TheNest.com helpfully explains the significance of the change: “Capital appreciation, also known as capital growth, refers to the increase in the value of an investment over time.” Which is to say, there is none. At the same time, the Trillium Small/Mid Cap Fund (TSMDX) changed Trillium ESG Small/Mid Cap Fund. In case you’re wondering, the objective here remains “long-term capital appreciation.” In case you’re wondering about the more consequential question, both of these funds have been ESG funds since launch. The name just highlights that fact.

AGFiQ U.S. Market Neutral Size Fund (SIZ) will be liquidated on or about December 30, 2019

BMO Global Long/Short Equity Fund (BGAQX) will be liquidated on December 23, 2019 “or such other date as determined by management.” (Isn’t that always the way?)

In a spectacularly unclear filing, the shareholders of Comstock Capital Value Fund (COMVX), a perma-bear Gabelli fund, voted to be something. Something really big. Read it three times. Mailed it off to Ed Studzinski. Got no real idea except that it will “cease to be an investment company under the Investment Company Act of 1940.” They’re issuing stock and transferring assets to New Comstock, Inc. and liquidating old Comstock unInc.  While New Comstock “will no longer hold itself out as an investment company,” it will be a company that makes investments as soon as the SEC de-registers it as an investment company.

Defiance Next Gen Video Gaming ETF (VIDG) will be AFK for the last time on December 27, 2019.

Equinox IPM Systematic Macro Fund (EQIPX) was scheduled to be reorganized out of existence on November 15, 2019. Its Board now affirms that “certain conditions … were not met as of that date.” And so the fund will “continue its operations for the present time.” No idea what those conditions were, either.

Franklin Flexible Alpha Bond Fund’s reorganization into Franklin Low Duration Total Return Fund (FLDAX) has been delayed until December 6, 2019, but may occur earlier or later if circumstances should change. It was originally slated for October 25, 2019. No hint about what “circumstances” are at play.

The Board of Trustees of Harbor Funds has determined to liquidate and dissolve the $32 million Harbor Small Cap Value Opportunities Fund (HSOVX). The liquidation of the Fund is expected to occur on December 20, 2019.

Highland Energy MLP Fund (HEFAX) will be liquidated on or about January 20, 2020

Lord Abbett Global Select Equity Fund (LGSAX) will be liquidated and dissolved on or around January 15, 2020

The $10 million Morgan Dempsey Small/Micro Cap Value Fund (MITYX) has been closed and will be liquidated on December 12, 2019.

PIMCO 1-3 Year U.S. Treasury Index Exchange-Traded Fund (TUZ) will be liquidated on or about December 18, 2019.

Powell Alternative Income Strategies Fund (PAISX) is expected to liquidate on or about December 13, 2019.

Timothy Plan Emerging Markets Fund (TPEMX) has terminated the public offering of its shares and will discontinue operations on or about December 27, 2019. The decision came, in part, because of “the general lack of interest among Trust shareholders in the Fund.”

The Westwood Strategic Convertibles Fund (WSCIX) is expected to cease operations and liquidate on or about December 13, 2019.