Democracy is grounded upon so childish a complex of fallacies that they must be protected by a rigid system of taboos, else even half-wits would argue it to pieces. Its first concern must thus be to penalize the free play of ideas. In the United States, this is not only its first concern, but also its last concern.

We are at that time of year when people should be reviewing their investment portfolios with a view towards adding or removing investments that (a) no longer suit their goals and objectives or (b) have met their goals or objectives and need to be replaced or (c) the investments have fundamentally changed. There is also the need to review tax or estate planning issues, as well as liquidity needs.

Following My Own Advice, At Last

Years back I observed that too many of us, myself included, owned too many mutual funds/pooled investments in publicly traded securities. If memory serves correct, I found to my horror that while I thought ten or less was the appropriate number, I had around twenty. Apropos of David’s comments this month about portfolio pruning, I have been doing a substantial amount of it. Some of it has been driven by the realization that I had become over-diversified (and I strongly suggest that one look at the holdings of the funds that one owns to see if you have drifted into that situation – you don’t need three funds that all own in their top ten J.P. Morgan Chase, Alphabet, Bank of America, Amazon, and the like). Often you will find that large cap active managers have effectively indexed themselves. I have moved to do what I have told others to do, seek uncorrelated investments. And then there is the control issue. I realized that I could do at least as good a job selecting individual equity investments as most of the fund managers whose products I was looking at. With that came the control over when to realize gains or losses from an individual tax perspective.

Parts of this process are relatively easy to implement. One does not need to have three different tax-free money market funds, a commercial paper and a U.S. government money market fund. Depending on your situation, one should be enough. You may find that your brokerage firm, for liquidity reasons, will probably force you into a government money market fund as a clearing vehicle. Find a provider that is large enough to deal with the vagaries of money market instruments. It should also be large enough to not “break the buck” when money markets go haywire. Which means we are talking about a Schwab, a Fidelity, a Vanguard, or a Northern. Costs are key. You are best off with the low-cost provider with the best back office service.

The equity portion of the assets will be the most difficult area for individuals to handle. Increasingly, given the governance structure of most 1940 Act mutual funds, you have a board of trustees, and an announced investment methodology. Most likely there is an investment committee or committees. In today’s world, that is a cumbersome process where a day’s delay can eliminate an inefficiency and investment opportunity. I look for vehicles where the process has a smaller number of steps to go through.

The ideal is the one-person investment committee. You are more likely to see a shortened chain in a limited partnership investment vehicle (with restricted liquidity, for qualified investors) or, in some closed-end funds. And closed-end funds may give you a greater bang for your buck given that they are often selling at a 10 to 15% discount to net asset value. But that discount only becomes real to you in a tax-free situation, which is why some closed end funds are the ideal vehicle for a Roth IRA. And now that we are living in a zero trading-commission world, the disadvantage relative to no-load funds is gone. Since the capital structure is fixed, there is no potential redemption problem. Assuming an ethical management that does not dilute you with rights offerings, but rather repurchases stock when appropriate, you have a value investor’s preferred structure.

There is a column about closed-end funds in this weekend’s Barrons (12/2/2019) by Leslie Norton on page 29 entitled “These Ancient Funds Keep Beating the S&P.” I recommend it. These are funds that survived the 1929 Crash. Of course, one reason the funds have achieved that kind of long-term success is that they are not getting cash at the wrong time (top of the market) that they have to invest nor do they have to sell things at the wrong time to meet redemptions. To buy something they generally must sell something. I would suggest that the three funds that she highlights first – Central Securities (CET), Adams Diversified Equity (ADX), and General American Investors (GAM) are worthy of a look by those with a long-term focus. I would also strongly suggest that one read the annual and semi-annual reports for those funds, to get a sense as to how they communicate with their investors.

Besides the spate of stories about funds, especially small cap funds, liquidating, there have been a number of hedge funds shuttering. Funds that have taken a “macro” approach have been especially hard hit. The most recent to announce a closing, at least to outside investors, has been Moore Capital, run by Louis Bacon. He joins others such as Stan Druckenmiller, who has scaled back his Duquesne Capital to a family office operation.

Last month, I wrote about the ability to earn a positive alpha having been arbitraged away in many instances. The increase in the number of algorithmic quantitative hedge funds that will exploit even the most minute inefficiency in the marketplace has made life even more difficult, nay impossible, for the traditional global macro hedge funds. For the twenty years from 1990 to 2010, those funds gained an average of 14.4 per cent a year. In 2019 to date, they barely exceed 5%.

This complements the failure of active stock pickers to succeed in the current environment. On the one hand, firms such as AQR have launched funds that quantitatively try to mimic the types of investments made by Warren Buffett (good luck with that). At the same time, investors such as Jeff Vinik have dipped their toes back into the investment water, only to pull them out rather quickly. A lack of patience by institutional investors, coupled with caution about high fees in general, has made investors such as David Scarozza, head of equities at the Commonfund unwilling to pay high fees for “simple ideas he could easily access through an index.” One thus finds the active stock pickers who are relative value players continually falling behind as well. They are using the approach of regression to the mean to rather cheaply endeavor to provide a strategy that generates excess returns without overpaying for deep research analytical talent. They end up lagging in terms of both performance and asset retention. It remains to be seen whether the absolute value investors will end up similarly or be able to provide a differentiation that provides an excess return over time over the germane benchmark. 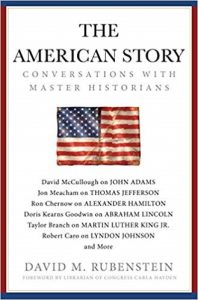 finance books that talk about gambling, poker playing, horse racing, blackjack, and other skills thought to provide an edge in investment management. I find myself in agreement with David Rubenstein, of Carlyle, who is of the opinion that too few Americans these days know anything about their history. To solve that problem, he has come out with a book entitled The American Story: Conversations with Master Historians, which is a collection of interviews with famous historians. They are discussing famous individuals in American history, such as John Adams, Alexander Hamilton, Lincoln, Martin Luther King, and Lyndon Johnson. I would agree with the thought that those who are ignorant of history are condemned to repeat it, which should be of great concern. 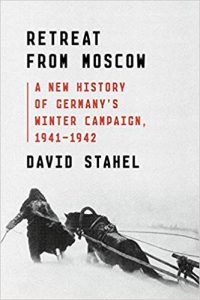 Museum and Library. The Australian historian David Stahel was speaking about his new book, Retreat from Moscow, about the German army’s retreat in 1941 from Moscow. Mr. Stahel’s specialty is researching and writing about the Eastern Front in WWII. He has published several books on that topic. We as Americans tend to know a lot about the Western front in Europe in WWII, the battles in North Africa, western Europe, and Italy. We tend to know very little about the Pacific War, which was really the American war and a separate one. And we know next to nothing about the Eastern Front.

One of the questions that I put to Mr. Stahel at his presentation was how the Americans and British would have fared had the German army taken up static defensive positions in Russia after October of 1941. Mr. Stahel indicated he hates hypotheticals, but then proceeded to answer me. Seventy-five per cent of the Wehrmacht, the cream of the German army, was on the Eastern Front in 1941. The casualty ratio at that time was six Russian casualties for every one German casualty. It raises questions about how things would have gone had the Soviets not been willing to take the kind of casualties they took and the Germans been able to shift more of their front line troops to the west. It also puts into perspective some of the resentments felt even today by Russians about the costs to them of “The Great Patriotic War.”

Why is Stahel interesting, especially from an investment perspective? In his in-depth research (down to reading diaries), he tends to stand things on their head and reach conclusions that are very different from conventional wisdom. Being inculcated with that approach and methodology is not a bad lesson to take and apply to looking at the investment and asset management world today. After all, we are, with a world of negative interest rates, someplace we have not been before. And dealing with those facts will require a different mindset than those that have been in place to date.