SmartETFs Dividend Builder ETF seeks consistent dividend growth at a rate greater than the rate of inflation by investing in a global portfolio of about 35 dividend-paying stocks. Stocks in the portfolio have survived four screens, one for business quality and three for valuation.

The managers might hold as few as 25 or as many as 75 names.

Ian Mortimer and Matthew Page. Dr. Mortimer joined GA in 2006 and also co-manages the Global Innovators (IWIRX) fund. Prior to joining GA, he completed a doctorate in experimental physics at the University of Oxford. Mr. Page joined GA in 2005 after working for Goldman Sachs. He earned an M.A. from Oxford in 2004. The guys also co-manage European versions of their funds including the Dublin-based version of this one, the $1.7 billion Guinness Global Equity Income.

About $5 billion based, in part, on trading and liquidity constraints.

90. Active share is a measure of the difference between what a manager holds and what their benchmark index holds. An index has an active share of zero and timid funds that charge active-manager fees but deliver timid index-like portfolios that might have an active share in the 20s or 30s. The higher the active share, the greater the prospect of non-index-like performance. 90 qualifies as an extremely high active share for a fund with a predominately large-cap portfolio.

It’s a little complicated. The managers, both residents of England, do not own shares of the American version of the fund but both have six figure investment in the European version. That provides the same portfolio, but a different legal structure and far better tax treatment. Mr. Page avers “it’s most of my pension pot.”

0.65% on assets of $23 million (as of March 2021). That makes it one of the 10 lowest-priced funds or ETFs in its Lipper Global Equity Income, one-third less than the group average and about on par with the $100 billion American Capital Income Builder Fund.

The Dividend Builder ETF, along with its Asia Pacific Dividend sibling, are the first two mutual funds to be converted directly into ETFs. The authorization grew slowly as the SEC slowly became comfortable with the implications of direct conversion, rather than the more common strategy of running the ETF version of a fund side-by-side with the original.

It is a grand experiment and potentially a revolutionary one.

We first profiled the predecessor fund, Guinness Atkinson Dividend Builder (2014), shortly after its inception and after long conversations with its managers. Identifying it as “an intriguing new fund,” we concluded:

The fund strives for two things: investments in great firms and a moderate, growing, income stream that might help investors in a yield-starved world. Their selection criteria strike us as distinctive, objective, rigorous and reasonable, giving them structural advantages over both passive products and the great majority of their active-managed peers. While no investment thrives in every market, this one has the hallmarks of an exceptional, long-term holding.

There are, in general, two flavors of value investing:

DIVS is firmly in the latter camp. Many investors share their enthusiasm for the sorts of great firms that Morningstar designates as having “wide moats.”

The question is: how can we best determine what qualifies as a “great company”? Messrs. Mortimer and Page start with a simple, objective premise: great companies consistently produce great results. They believe the best measurement of “great results” is high and consistent cash flow return on investment (CFROI). In its simplest terms, CFROI asks “when a firm invests, say, a million dollars, how much additional cash flow does that investment create?” Crafty managers like cash flow calculations because they’re harder for firms to manipulate than are the many flavors of earnings. One proof of its validity is the fact that a firm’s own management will generally use CFROI – often called the internal rate of return – to determine whether a project, expansion, or acquisition is worth undertaking. If you invest a million and get $10,000 in cash flows the first year, your CFROI is 1%. At that rate, it would take the firm a century to recoup its investment.

The GAINX managers set a high and objective initial bar: firms must be paying a dividend and must have a CFROI greater than 10% in each of the past 10 years. Only about 5% of all publicly traded companies clear that hurdle. That screens out both cyclical firms and those whose management does not consistently and substantially add demonstrable value.

Because such firms tend to see their stocks bid up, the guys then apply a series of valuation and financial stability screens as well as fundamental analyses of the firm’s industry and challenges. In the end, they select the 30-35 most attractively valued names in their pool.

The fund has done exceptionally well since its inception. Lipper categorizes it as a “global equity income fund.” That is a more representative group than Morningstar’s “world large cap” one since the fund’s focus on dividends (i.e., equity income) is central to their discipline.

From inception through conversion, the Guinness Atkinson fund pretty much crushed its peer group.

Which is to say, it had decisively stronger performance in raw returns, risk avoidance, and risk-adjusted returns than its peers. Perhaps more telling, it was consistently a top five fund in its group across a variety of time periods and a variety of metrics.

How do you read that? Annual returns are consistently in the top 10%, ranked 1 – 4 depending on the period. Sharpe ratio, the most widely quoted measure of risk-adjusted returns is consistently in the top 10%, ranked 1-3. The capture ratio compares the amount of an index’s upside you capture to the amount of downside. Think of it as “bang for the buck.” As a global fund, we checked the fund’s capture ratio against both the S&P 500 and the MSCI All-Country except the US index. The fund was almost always the highest-ranked fund in its group. Finally, the Ulcer Index combines two measurements – how far a fund drops and how long it stays down – with the insight that if a fund crashes and sits there smoldering, it’s going to create ulcers. Good news: GAINX investors were among the industry’s most ulcer-free, ranked 2-4.

That consistent excellence has won the fund notice if not yet US assets. The fund has earned MFO’s Great Owl designation for consistently top-tier risk-adjusted performance; it is one of only three global equity income funds to have done so.

European investors, who have committed $2 billion to the strategy, and raters seem to have a clear sense of the fund’s excellence. 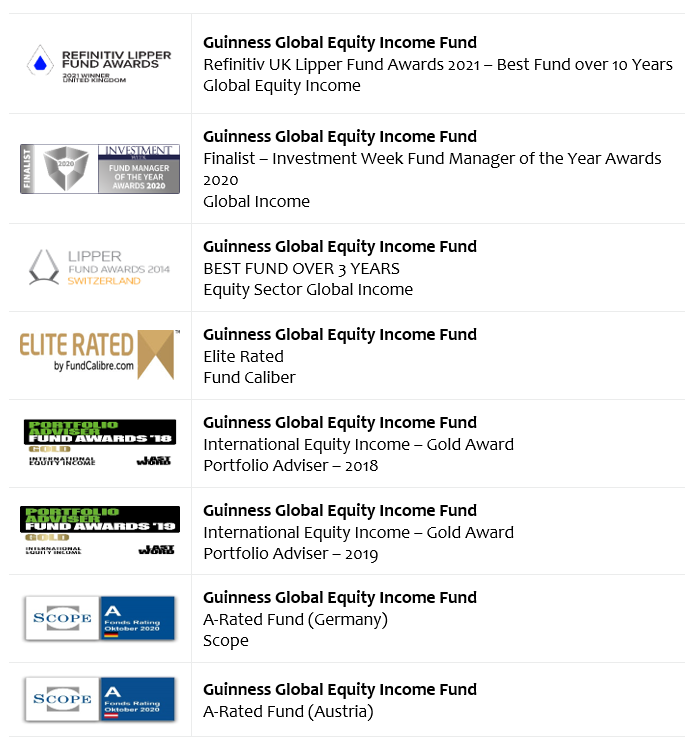 Its new ETF wrapper makes its future brighter than its past.

ETFs embody a series of structural advantages over open-ended mutual funds. They have lower structural costs, which means that they can charge lower fees to their investors. ETFs are modestly, though variably, more tax-efficient than identical open-end funds would be. And their investors are less bothered by the decision of others to sell fund shares; in a traditional fund, the departure of other investors can trigger substantial tax bills (and portfolio gyrations) for the remaining investors. In an ETF, not so much.

GAINX has been a top-tier fund. We have confidence that DIVS, its new manifestation, will have equal success by investing in great companies that have proven their mettle across decades of performance.

SmartETFs Dividend Builder. As you pursue your due diligence, at the SmartETF website and elsewhere, please note that there was another ETF that traded under the DIVS ticker. That might cause some confusion if you’re incautious. In addition, while DIVS is GAINX, Morningstar has struck all historical data for the fund (and is currently treating DIVS as if it first saw the light of day last week).