There are two arguments for paying attention to Frontier Caravan.

First, valuations in emerging markets are at their lowest levels in a decade. 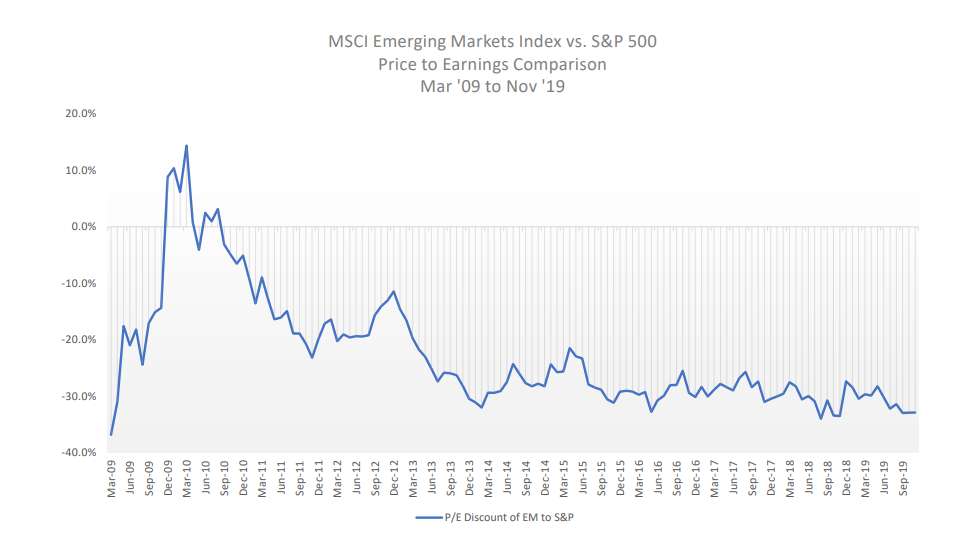 In general, money flows toward inexpensive asset classes. The long-term asset class projections from State Street, BlackRock, Northern Trust, Research Affiliates, GMO, Callan Associates, and others uniformly foresee stronger performance in the emerging markets than in either the US or other developed markets. It is more typical for projections to rank the US as the least attractive venue for the next decade, rather than the most attractive.

In the rare instances when investment style is also considered, value – and particularly EM value – trumps growth. The magnitude of the projected outperformance varies – some models see a few tenths of a point annually, some see multiple percentages annually – and forecasters routinely model higher volatility in EM than elsewhere, but there’s a near-universal agreement that – after a decade long run in the US markets and near-record valuations – the compelling opportunities lie elsewhere.

Second, the Caravan team is experienced.

Mr. Quisenberry began his career in 1987 at Fred Alger Management in New York as a research associate, was a Vice President and portfolio manager at Cutler & Company. In 1994 he joined Parametric, a Seattle-based subsidiary of Eaton Vance, and became Parametric’s Director of Research and chief of emerging market strategies.

His strategy starts with country selection. His research found that country risk dominates in the emerging markets. About 73% of the portfolio’s risk, for example, is driven by country risk. As a result, he spends an abnormal amount of time and energy managing that source of risk. He grades each country based on five variables (P/E, P/B, dividend yield, correlations, and volatility) then systematically favors investments in high-rated nations and underweights low rated ones. As of September 30, 2019, that would translate to a huge overweight in Turkey (8.0% versus 0.6% in the index) and much larger underweight to India (0.9% versus 8.9%) and China (16.5% versus 31.9% for the index). The top five countries in the MSCI EM index (China, South Korea, Taiwan, India, Brazil) comprise nearly 75% of the MSCI index weighting but only 30% of the Caravan weighting. That means that Caravan’s portfolio is, necessarily and automatically, far different from the index.

At the security level, his discipline is value-oriented, more focused on consumer and financial stocks, and somewhat ESG screened.

The minimum initial investment for “I” shares is $100,000 and the initial expense ratio is 0.80%. The minimum for Service shares is $10,000 with an e.r. of 0.95%. The fund has about $21 million in assets. It’s not a great surprise that the fund’s homepage is almost no content: some text cribbed from the prospectus and linked to generic docs from the adviser.