My home state of California rates a close second to Pennsylvania.

Assets under management (AUM) by the fund companies.

At $6 trillion, it sports twice the AUM of New York.

While Pennsylvania is home to fund behemoth Vanguard, California is home to about 125 fund companies, including Capital Research, advisor of American Funds, BlackRock iShares, PIMCO, Dodge & Cox and DoubleLine. Charles Schwab also resides here but recently announced it would be moving its headquarters at least to Texas with the TD Ameritrade acquisition.

The AUM is split pretty evenly between the north and south parts of the state. San Francisco with surrounding cities like San Mateo, Walnut Creek, Redwood City, San Jose, and Palo Alto, may hold a slight edge over Los Angeles with its surrounding cities like Newport News, Pasadena, Santa Monica, El Segundo, Irvine and Beverley Hills.

Walnut Creek based Litman Gregory recently held its Investment Forum in San Francisco, and I used the opportunity to catch-up with three previously profiled funds. I remain a champion of all three:

In his amazing book Outliers: The Story of Success, Malcom Gladwell maintains that meaningful work embodies three things (paraphrasing): it challenges the mind, has no one looking over your shoulder, and provides reward commensurate with effort. Each time I visit Tom Miner and his team at Garrison Point, IOFIX’s subadvisor, I see meaningful work firsthand.

Still in Walnut Creek, they moved recently to a smaller, but more open office with great views of the town’s rolling hills. It’s just a block from the BART station, about 30 minutes to downtown San Francisco. The enthusiastic team has grown slightly, but at its core remains three traders and three analysts.

Sixty-five inch displays line tables and walls, most emitting market data from Bloomberg terminals. One emits a crystal clear live image of co-founder and CEO Garrett Smith. He says “hi” as I walk in. He often works remote from his home state of Idaho. Co-founder and CIO Brian Loo works similarly from LA. 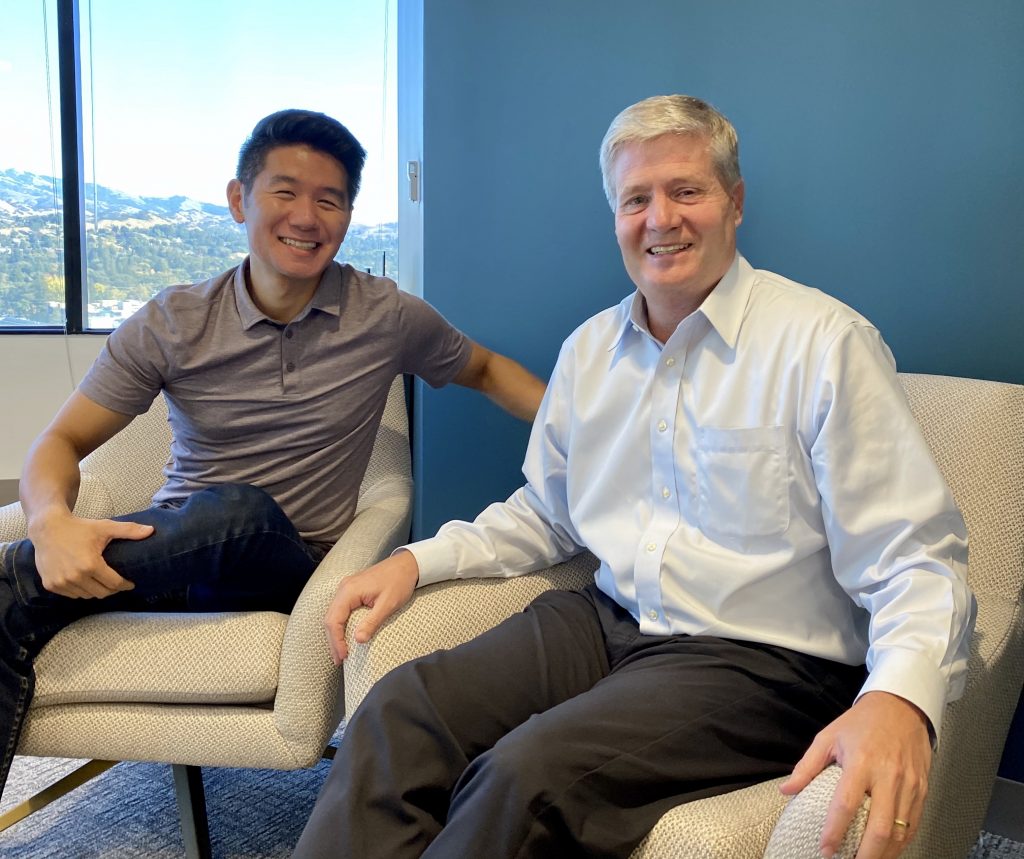 While touring the new space, Director Jonathan Tran and I marvel at the rapid advancement in streaming technologies that make remote work possible: the myriad of communication features on the iPhone, proliferation of wireless Nest cameras in the home and office, and free high-speed internet at public libraries.

Why are city managers from small and rural cities around this state encouraging companies to set-up remote offices or utilize the satellite work spaces they themselves are building? “Because they are places where young families and college grads can afford to live. San Francisco and Palo Alto are untouchable.”

This team remains immersed in the “miracle of the housing market.” With emphasis, Tom adds “no other asset class both appreciates and de-leverages.”

But he is skeptical of the large disparity between the most expensive properties and the least. “You know what the difference is? $2000 per square foot versus $20!” While his job mandates he ponder ways to exploit the opportunity, he personally looks for ways to help communities with current low-income housing shortages.

Tom and Jonathan take me through their latest chart deck on the fund.

Many of the selling points remain:

Corporations have re-levered since the great recession, making corporate debt twice as large as non-agency residential mortgage back securities (RMBS) and BBB ratings now represent largest portion of investment grade credit, like it was in 2001 and 2008.

There is less than $300B in legacy (2007) non-agency RMBS debt available, down from its peak of $2.1T in 2007. It continues to shrink at 16% per year. They’ve partially replaced their legacy holdings with Freddie K, the multi-dwelling equivalent.

Per the latest statement of additional information (SAI), Garrett and Brian have increased their investment in the fund to over $100K each up from $50K and $10K. Tom remains above $1M.

IOFIX assets have grown to $4B, which places them in about the 15th spot of 130 funds in its category. The largest by far is PIMCO Income (PIMIX) with $134B AUM.

Why has AUM grown?

Because since launch in July 2015, the fund goes up in healthy increments and rarely goes down. Through November 2019, it has returned 10.2% annualized, or 6.2% better that its peers … annualized! Its worst drawdown, based on month ending returns, was 0.9% in December of last year when everything else was crashing.

It holds the top absolute and risk adjusted (based on Martin) return positions in its category since launch, with a batting average (of beating peers monthly) of 72%.

It returned 12% this past year and pays a 4.7% dividend, distributed monthly.

The fund has received Morningstar’s 5 star rating since it turned three. It also received Lipper’s “Best” rating in the Multi-Sector Income category.

It is an MFO Great Owl.

Here are the four-year risk and return measures of the five top performing Great Owls in the Multi-Sector Income category … IOFIX far outperforms them all:

Why have they not yet closed, when in our profile (at closer to $2B) Tom felt closure was month-to-month?

“We still manage to find opportunities. At the current rate of growth, it amounts to just one trade per day.” The firm now prefers “steady if slightly increasing net flow.”

So far, it has not hurt performance. As a niche firm, they hold only a small percentage of the non-agency RMS market. Much larger holders are PIMCO and TCW.

Regarding liquidity, they continue to maintain a $200M line-of-credit (LOC), though they rarely to use it. Last time was about a year ago. The LOC represents a hedge against any sudden large redemption. That said, they also know every shareholder of the fund and ultimately their behavior. Any frequent trading is flagged and no single shareholder owns enough to warrant concern at this point.

Junkster, a long-time junk bond investor and contributor to the MFO Discussion Board, posted recently that this fund possessed unique qualities. He believed the Garrison team seized the right opportunity set at the right time. And, because of its niche roll, the fund had not succumbed to group think. From his post:

These subprime borrowers have now been in their homes 12 to 16 years and have built up equity instead of being upside down when the housing market cratered in 07/08. Dan Ivascyn mentioned in his recent interview how unlikely these borrowers would be to default now even if their economic situation worsens.

In any case, with over 13,000 funds flooding the market place, the folks at Garrison Point accomplished something quite unique.

It has been a joy to watch this shop do meaningful work.

Venk Reddy, Founder and CIO of Zeo Capital, along with Paige Uher, Director Investor Relations, were kind enough to meet with me in their downtown SF office for a brief update on ZEOIX and the firm in general.

Each time I meet with Venk I come away feeling he’s always the smartest guy in the room. Since launching ZEOIX in June 2011, the fund has delivered 3.1% per year in a zero interest rate environment.

In 2018 I surmised that given “the current interest rate environment and the continued maturity of this fund, there has never been a better time for very conservative investors to consider owning ZEOIX …”

Its AUM now exceeds $400M and Paige makes a point of knowing every investor. The quarterly letters and teleconferences with investors help support its growth.

Since launch, it is a top quintile fund based on every risk adjusted return measure in the Multi-Sector Income category and holds the highest Martin Ratio.

Its drawdown based on month ending return has never exceeded 1.5%.

It is an MFO Great Owl.

It remains a very attractive option for risk-averse investors who might normally only consider money market funds.

The firm continues to patiently seek short-term credit opportunities in defensive, if boring, companies that everybody needs with minimal chance of default. And, it’s never tempted to just “do something” if the opportunities don’t appear.

“Did you know there is a helium shortage?” Venk asks. And then goes on to tell me about companies benefiting from it.

He remains skeptical of the Fed’s “unapologetic market manipulation” and of the industry’s “vilification of paying for expertise.” Paige informed me that they were not crazy about our latest expense ratio rating (ZEOIX scores a 4 … above average.), but did share they were hoping to reduce the ER still.

The firm lost portfolio manager Brad Cook, requiring Venk to engage more frequently in daily operation, but Paige shares that she appreciates the benefits of a small team.

Finally, their second fund Zeo Sustainable Credit (ZSRIX), which David alerted us to recently, has accumulated about $10M. But the firm is deeply committed to the fund, stating “ESG has a long-term mandate” and “sustainable credit equals good credit.”

I give Brian Selmo my vote for best talk. He’s one of FPA’s portfolio managers along side Steven Romick.

Since its launch just over 8 year ago, MASFX is the top returning fund in the so-called Alternative Multi Strategy. Here is Lipper’s definition:

Funds that, by prospectus language, seek total returns through the management of several different hedge-like strategies. These funds are typically quantitatively driven to measure the existing relationship between instruments and in some cases to identify positions in which the risk-adjusted spread between these instruments represents an opportunity for the investment manager.

Here are its 8-year risk and return numbers versus category average:

It reduced its expense ratio recently to 1.36%, which places it as one of lower costing alt funds.

AUM has slowed a bit and remains just under $2B. I suspect it will climb more quickly when volatility returns to the markets.

Given the uncertainty of today’s environment, this conservative fund is one I would strongly consider owning.

I continue to believe that the alternatives space is where LG analysts add value:  vetting, portfolio construction, and monitoring. If it were my firm, I’d consider providing only mixed-asset funds with alternative strategies, perhaps targeting various levels of risk tolerance, investment horizon, and investor need … like I believe they have and are trying to do with MAFSX and MAHIX, respectively.

Here’s lifetime performance on the full family of LG funds, with MASFX remaining its clear star.