Seafarer thrills! Russ Kinnel, anyway. Russ’s December 30th “The Thrilling 34” article sought to create “a short list of outstanding funds accessible to individual investors.” The plan was to screen for the more important investment factors, “and let them do the weeding for me.”  They are

On a list dominated by very large funds (and fund companies – 28 of the offerings were from five big firms), Seafarer Overseas Growth & Income (SIGIX) stood out as the only independent fund to make the list. In addition to passing screening criteria that eliminated, well, 7200 other funds, Kinnel celebrated the fact that “Andrew Foster has done a fine job here and at previous funds he ran for Matthews.”

Voya Corporate Leaders (LEXCX) was the subject of John Rekenthaler’s December 31, 2019 essay, “How Tortoises Compete with Hares.” LEXCX, originally Lexington Corporate Leaders, is one of the industry’s coolest stories. It was set up at the start of the Great Depression with a singular mandate: invest, exclusively and eternally, in a portfolio of America’s 30 greatest companies. Once that portfolio was set, it was never permitted to change and so the fund needed, and has, no manager. MFO long ago dubbed it “the ghost ship of the investing world.” In any case, John misunderstood the reason for the absence of financial and tech stocks (Radio Corporation of America anyone?) in the portfolio; Jason Zweig amiably swatted him upside the head.

LS Opportunity Fund (LSOFX) received a five-star rating from Morningstar on November 30, 2019. The adviser shared this snapshot of the fund’s performance since the arrival of the Prospector Partners management team.

Our profile of the fund, which was written just a bit after Prospector Partners became the fund’s subadviser, concluded that “The evidence available to us suggests that LSA has found a good partner for you: value-oriented, time-tested, and consistently successful. As you imagine a post-60/40 world, this is a group you should learn more about.”

Royce & Associates has just announced a bold rebranding strategy. It “better describes the breadth of the firm’s business and the importance it places on the spirit of partnership with which the company has always conducted itself … it better represent[s] to all of our constituents who we are now as a firm … it better represent[s] the range of our strategies.” With a boldness surely inspired by their be-bowtied, soon-to-be-octagenarian founder, Royce and Associates has become …

Here’s the 12 year correlation between their flagship Pennsylvania Mutual (PENNX) fund and the other funds in their lineup: 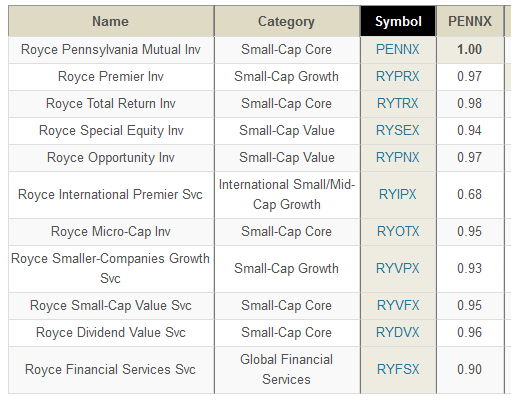 There’s one fund in the lineup, their only international offering, with a correlation to the flagship of below 90. And that’s after liquidating much of the sea of clones they launched after Legg Mason bought them.

I got a heads up about the change from a reader, Brett S., who concludes, “The joke writes itself. RIP.” The folks on our discussion board weighed in, noting that Royce does have several fine funds, and then a lot of chaff. One hopes that the name change signals a generational shift in leadership that will allow folks to make some hard, important decisions.

Special thanks, once again, to The Shadow for his indefatigable trawling of the SEC database. Much of what follows reflects his posts this month on the MFO Discussion Board. Gracias!

Effective December 31, 2019, Tad Rivelle and Bryan Whalen leave the management team for TCW High Yield Bond (TGHNX) and Metropolitan West High Yield Bond Fund (MWHIX). Our Manager Change column is away this month, skiing in Vail or surfing off Maui or something. It’ll be back, tanned and rested next month. That said, Mr. Rivelle is one of the top tiers of managers, independent and respected, whose movements deserve note.

Dimensional Funds announced expense reductions on 77 of the DFA Funds offered to US investors; those cuts will take place on February 28, 2020.

Gabelli / GAMCO is getting rid of a lot of surplus share classes (AAA, A and C) for at least four of their funds, Gabelli ESG Fund, Gabelli International Small Cap Fund, Gabelli Global Rising Income and Dividend Fund, and Gabelli Global Mini Mites Fund. The minimum initial investment for the remaining “I” shares have been reduced to $1,000.

Apparently two of those three funds are actually “The Gabelli” funds, apropos of an organization dominated by The Mario.

Vanguard is trumpeting (a) having lowered fees on 56 funds over the past several months and (b) saving investors a collective $750 million through fee reductions over the past four years.

Nope. Not that I noticed.

In the near future, Invesco will tweak the names of seven funds. The fates of 80 others are discussed below in “The Dustbin of History.”

Effective on or about February 3, 2020, the Walden Small Cap Fund’s name will change to Boston Trust Walden Small Cap Fund (BOSOX!). The fund’s ESG screening will be extended to include a flat ban on investments in certain industries ranging from factory farming and private prisons to alcohol and tobacco.

Aberdeen Japanese Equities Fund (AJEAX) will be liquidated on or about January 16, 2020. It’s few investors have been loyal, though I’m not entirely sure why.

City National Rochdale Short Term Emerging Markets Debt Fund (CNRGX) “will liquidate approximately 2 ½ years after the Fund’s inception date of May 14, 2019.” Uhhh … they’re prospectively announcing a closure in December, 2021? Here, you can read the filing for yourself.

Invesco reads Orwell. The new term for “liquidation” or “execution” is “rationalization.” Invesco has absorbed a lot of competitors and launched a fair number of “funds that seemed like a good idea at the time”. And now cometh The Reaper bearing a rationalization decree.

Invesco Oppenheimer Capital Income Fund is merging into Invesco Multi-Asset Income Fund (PIAFX), likely in April or May 2020. The latter is a good fund with $850 million in assets and low expenses, so good news for the investors.

Janus Henderson U.S. Growth Opportunities Fund (HGRAX) will be liquidated on February 7, 2020. Strong insider investments and respectable record but only $31 million in assets.

LMCG Global Multicap Fund (GMCRX), another decent fund with no investors, will be put out of its $1.5 million misery on January 15, 2020.

Loomis Sayles Multi-Asset Income Fund (IIDPX) will be liquidated on or about February 3, 2020. Morningstar offers an intriguing picture which, at the very least, implies an intriguing back story. 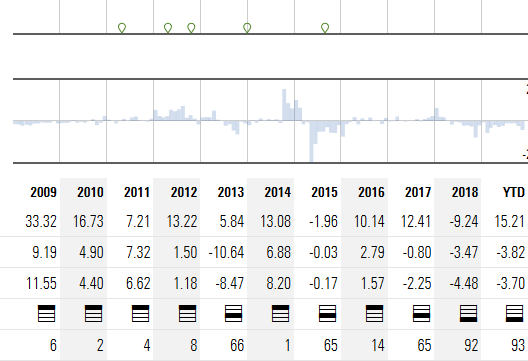 Each of the green teardrops on the upper line represents a partial management change, as the team once led by the renowned Kathleen Gaffney was succeeded by a new trio. Hard not to notice the correspondence of her team’s departure, asset outflows and faltering performance.

Putnam Capital Spectrum Fund (PVSAX) and Putnam Equity Spectrum Fund (PYSAX) will merge into Putnam Focused Equity Fund (PGIAX) on April 20, 2020. It’s always curious when you’re merging your big two-star funds – in this case, a billion dollars’ worth of them – into your little ones.

Give or take your judgment about the effects of Brexit, I doubt that investors choosing such a fund did so out of excitement about the emerging markets.

TCW International Small Cap Fund (TGNIX) has closed and will be liquidated on February 13, 2020.

WSTCM Global Allocation Risk-Managed Fund (WSTEX) will liquidate on February 20, 2020. Not a terrible fund, just one that almost nobody was interested in. “Wilbanks, Smith and Thomas” in case you’re interested.