The fund seeks long-term gains which it pursues through a primarily domestic stock and bond portfolio. The managers will invest as heavily in stocks as the market warrants, which might be 40% and it might be near 80%. The equity portfolio is not constrained by market capitalization but the managers prefer small cap stocks. The bond portfolio is primarily convertible and long-dated “zero coupon” corporate bonds. The managers might invest in distressed securities, both in the equity and fixed-income portfolios. They may be “a large cash position for a transitional period of time.” At the start of the global crisis in 2007, cash stood at 25%. In May 2020, it’s closer to 3%. 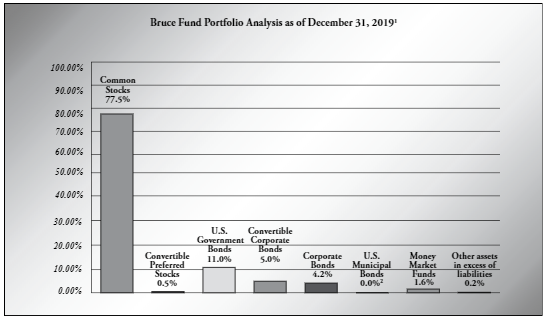 Bruce & Co. Bruce & Co. was launched in 1974 and is located in Chicago, Illinois. The firm reports have two non-clerical employees. They provide investment management services for the Bruce Fund, twelve individuals, and what looks to be a couple of charities and a pension plan. They do not, they aver, have a Twitter account. (We nod.) They do have $616 million in assets under management, as of March 2020.

Mr. Bruce and Mr. Bruce both have over $1,000,000 in the fund and are the owners of the adviser. There are only two outside directors who receive nominal compensation ($1000 / year) and have nominal investments in the fund.

0.68% on assets of $492 million. That’s extraordinarily low, given the fund’s size and activity.

For many Americans, the “social distancing” rules of 2020 were onerous and intrusive. For the managers of the Bruce Fund, they’re pretty much status quo. The managers rarely speak to the press (we can identify one short interview per decade), don’t advertise, have never spoken to a Morningstar analyst, refuse to be photographed, and limit shareholder communication to a bare minimum. There are no shareholder letters or factsheets, certainly no whitepapers or slide decks. The substantive comments in their 2019 Annual Report were 158 words. Their year-end Semi-Annual Report clocked in at 74 words.

Articles about the fund come in two flavors: the “the best fund you’ve never heard of” articles and the “let’s give you the real scoop on what the managers are thinking and doing ones. The former is harmless. The latter is occasionally laughable for their tendency to make pronouncements (“the secret is the mix of micro-caps and zero coupon bonds”) that confuse the fund’s position at a particular moment in time with the strategy that led to that point.

None of that obscures the fact that Bruce Fund has an almost unparalleled record of performance over time. It has a five-star rating (and has maintained it consistently) and Gold designation from Morningstar (though it does not have analyst coverage). It has been designated an MFO Great Owl for achieving top 20% risk-adjusted returns in every trailing measurement period. It is a Lipper Leader for Total Return and Consistent Return for every period they measure.

Rather than looking at the “what have you done for me lately” 3- and 5-year records (which, by the way, are to 20%), we’ll share three metrics across more meaningful stretches: multiple decades, full market cycles and the last two market crashes.

APR measures the fund’s returns, for all periods except the three months of decline at the start of 2020, those are annual returns.

Sharpe ratio is the most widely quoted measure of risk-adjusted returns, though our general preference is for a more risk-sensitive measure such as Martin Ratio.

Here’s a rough approximation of the strategy

The Bruces appear to be skeptical devotees of equity investing. They target buying high-quality stocks, more commonly smaller names than most, but they’re not blind to the fact that rigidly following their preferences is not always a good idea. Their choices reflect remarkable mental agility.

Coming into 2020, the managers were not enthused about the statement of the economy, the markets, or the polity. Here is their entire year-end commentary:

The worldwide economy has slowed, and yet stock markets have looked beyond the trade tensions and continued to rise despite the slower economic activity. Given the excessive debt levels, the geopolitical, economic and policy uncertainties, we feel caution is warranted. Valuations for some companies show compelling long term opportunities but the market overall is very expensive and any further slowdown might expose the lofty multiples so we believe a more conservative posture is warranted.

In their June 30, 2019, Annual Report, they warned that central bank interventions were increasingly destructive:

Central banks increasingly financing government deficits through money creation and manipulations ultimately raises the risk in the market to an unacceptable level. Stimulus from central banks have bolstered asset prices, and the preverbal “pushing on a string” might be near, where such stimulus will have ever diminishing effect on the economy.

With the exception of that passage, their mid-year and year-end commentaries were identical: excessive debt, poor global leadership, excessive valuations, and “caution is warranted.”

Bruce is an enigmatic fund because its managers choose for it to be so. They don’t explain themselves to the public, though do answer calls from their investors. They don’t have “a formula,” don’t rely on rigorous quantitative analysis, don’t have “a deep bench” behind them. They do, so far as I can tell, talk to lots of contacts and industry insiders to keep a clear view of where risks and opportunities lie. They do maintain consistently low portfolio turnover while still moving when the opportunity set arises.

The two cautions about the fund are (1) the elder Mr. Bruce’s age and the implication of moving from a two-person team to a single manager without a partner and (2) the insensitivity of the portfolio to the sustainability, in an ESG sense, of the portfolio’s holdings.

That said, it is hard to imagine why an independent-minded investor wouldn’t have the fund on their due-diligence list.

Bruce Fund. Nice picture of the Chicago skyline and, really, not so much else.