The average five-star US small-blend equity fund posted a loss of –22% between January 1, 2020 and May 1, 2020. Fortunately for its investors, Palm Valley Capital Fund is not your average small-blend fund and it returned +7.25% for its investors with nary a short, derivative, hedge or scrap of financial engineering in sight.

Using the Russell 2000 as a proxy, that sort of looks like this: 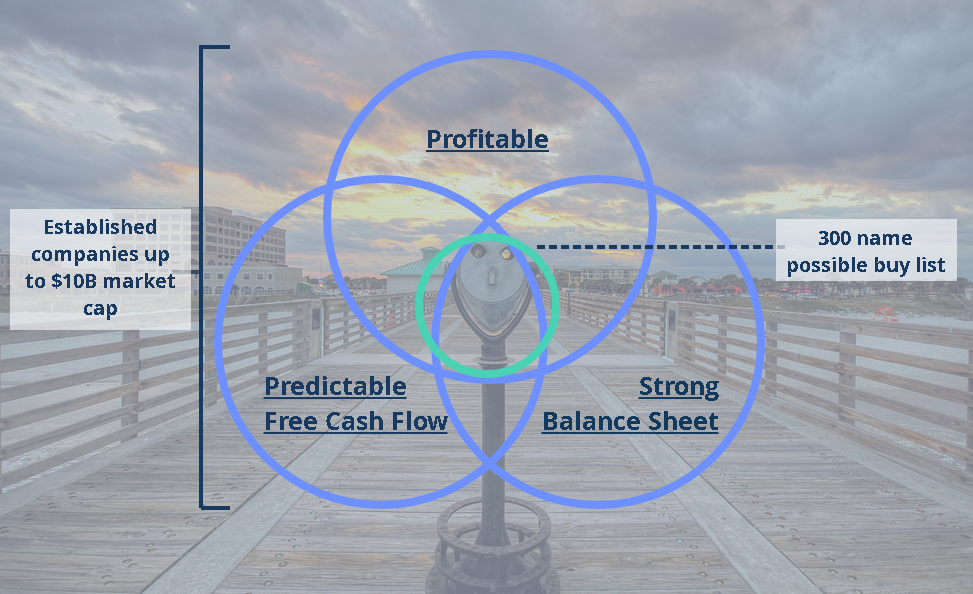 Here’s my summary of the managers’ investment discipline:

Within the universe of US small cap stocks, buy (a) great companies (b) whose stocks are seriously mispriced.

If a stock ceases to meet conditions (a) and (b), sell it.

If no stocks meet conditions (a) and (b), buy no stocks.

Eric Cinnamond began managing small cap portfolios in 1998, first for Evergreen Funds and then for Intrepid Capital. He pursued absolute value investing in both the Intrepid Small Cap SMA strategy(1998-2010) and the Intrepid Small Cap Fund (2005-2010). After a move to Florida he managed the Aston River Road Independent Value Fund (ARIVX) until he chose to close it and return capital (2010-2016). Eric returned capital to investors in 2016 because he did not believe there were compelling investment opportunities.

Messrs Cinnamond. and Jayme Wiggins met in 2002; shortly thereafter, Mr. Wiggins was hired as an analyst. When Mr. Cinnamond left the firm, Mr. Wiggins succeeded him as manager, a position he held until leaving Intrepid in September 2018. They launched Palm Valley together in April 2019.

They are very good at executing their discipline. Since we appear to be at a market turning point, let’s look at how their previous fund performed for the five years following the peak of the prior bull market, in October 2007. To be clear, 10/2007-10/2012 only. For comparison, we’ve included the returns of both the Vanguard 500 Index and the Russell 2000 small cap index.

Hmmm … up 1.4% versus up 72.8%. That would be a fifty-fold difference in returns. That difference was driven by having a large reverse of cash at the outset of the crash, a willingness to deploy it aggressively at the depth of the crisis, and the addition of excellent stocks to the portfolio.

On average, the stock market alternates between rising and falling markets on about a seven-year cycle. That pattern was broken during the Late Great Bull of 2009-2020 when the market rose longer than ever before with stock valuations at their second- or third-highest levels in history.

As valuations rose and the managers could find fewer and fewer “great companies with seriously mispriced (well, underpriced) stocks,” they let cash build in the portfolio until they finally held 90% of their assets in cash. Meanwhile, overvalued stocks – buoyed by near-zero interest rates which facilitated record stock-buybacks – rose steadily, becoming more and more overpriced. A recent shareholder letter returned to the tennis analogy first popularized by Charles Ellis in his essay “Winning the Loser’s Game.”

My tennis game as a young player and the last three market cycles have much in common. Investors and policy makers have been playing aggressively, overhitting, and ultimately committing too many unforced errors. Over the past two decades, we’ve been in a period of rotating asset bubbles, encouraged by ultra-easy monetary policy, fully invested mandates, and an obsession with keeping up with the herd (relative return investing).

With the latest asset bubble and market cycle ending, the Federal Reserve is back to its usual playbook—hit hard (flood the system with money) and with little control (hope the money lands in the right spot). While the Fed’s actions have been all too predictable, investors do not have to play along. They have a choice.

We asked the guys why, after three market cycles and the government’s ongoing market distortions, they wanted to get back in the game. Here are their 300 words on what they’re thinking:

Brought together by our shared beliefs and passion for absolute return investing, we founded Palm Valley Capital Management to give investors an alternative to relative return strategies. Unlike small cap managers who mirror a benchmark or peer group, we view investing in absolute terms. Put simply, we love making money and hate losing money even more!

Our goal is to produce attractive absolute returns over a full market cycle. To accomplish this, we stick with what we know. Our opportunity set mainly consists of small caps we’ve followed for many years. Secondly, we don’t combine operating and financial risk. If cash flows are inconsistent, the company’s balance sheet must be strong. Lastly, we don’t force invest or manufacture opportunities—patience is our guiding principle. During periods of significant overvaluation, you can expect us to have a large allocation to cash. We will never knowingly overpay simply to stay fully invested.

Protecting capital when opportunities are scarce is essential to meeting our investment goal, but when we’re getting paid to take risk, we should act decisively. We’d much prefer to be fully invested because it would mean we’re finding enough value to meet our absolute return hurdles.

We think our ability to invest in a flexible manner positions us well to respond during market turmoil like we recently experienced. In many ways, our process is countercyclical—we become more aggressive when other investors are seeking safety, and we are defensive when risk-seeking behavior is prevalent. Ultimately, we want to own a portfolio of good businesses at good prices.

Palm Valley Capital Fund has a $2500 minimum initial investment with a capped expense ratio of 1.25%. The fund gathered about $7 million in assets since its April 2019 launch. The fund is available directly through the advisor and through Pershing and Vanguard. Mr. Cinnamond, writing from a lawn chair in his backyard, reported that “We continue to try to get on TD, Schwab, and Fidelity…it’s been a bear!”

An appeal to financial advisors:  If the strategy makes sense, go bug your Schwab / Fido / TD service rep about it. The managers note that “it’s never been harder to get on the platforms,” which frustrates them because other advisers have offered up $5 – 15 million allocations … if they can work through Schwab, TD or Fido. Schwab’s current position is that a new fund will be considered only if it has $100 million in assets already which is possible only if the fund gets on …

Here’s the fund’s homepage. It’s got a lot of links to other documents but is otherwise fairly Spartan.